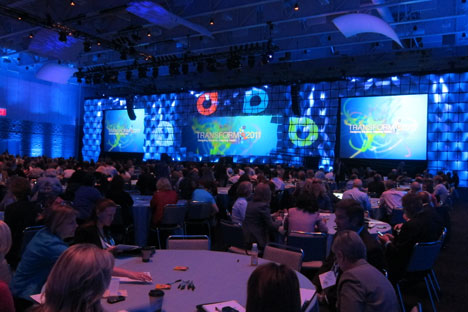 The Mayo Transform Symposium was inspiring, yes. People from design, healthcare and corporations all came together and talked about what is going on in healthcare, and how we can work to change it. As mentioned in the first post on the conference, the complexity of changing that system is daunting, but several groups and individuals are tackling it in their own ways.

John Thackara further emphasized the theme of breaking out of a static hospitals-as-institutions structure, attacking the Mayo directly for the giant physical energy-depleting structures it embodies. He pointed out that 95% of healthcare happens outside the medical system—between caregivers and families (just as most of life happens outside the medical system.) Thackara argued that we need to see health and well-being as properties of a social-ecological context. His key point was that healthcare should not be about intervening in peoples' lives when needed, but rather being in them at all times, which then subverts any need for interference.

Architect Michael Murphy, co-founder of MASS Design Group, presented a perfect example of healthcare becoming part of the community in which it works with a project on a hospital he worked on in Rwanda. The Butaro Hospital was built in a beautiful, mountainous region where 400,000 people were underserved by 0 doctors. One of the biggest concerns in designing the hospital was to combat Extremely Drug Resistant Tuberculosis, which is contracted via the air, when two strains of TB mix. In the design of a standard hospital ward in Rwanda, hallways provided an ideal mixing place for this deadly strain of TB.

To minimize air mixing, Murphy and his team designed the hospital itself as a preventative mechanism for TB. They created the hospital with several separate buildings, essentially removing all hallways from the basic architecture. Additionally, they used simple architectural methods to increase ventilation, with fans, UVGI lights in the ceiling to clean air, and high windows to move air in and out. Additional considerations were made toward patient experience, by designing rooms with patient beds pointed at windows rather than other sick patients. 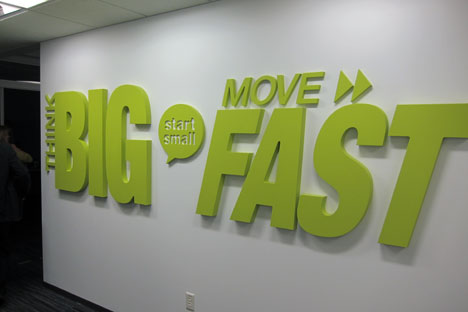 Just as Murphy's Butaro Hospital is an example of Thackara's notion of healthcare being in communities at all time, so is the Center of Innovation itself. What may have been most inspiring about the whole conference is the work they are doing at CFI, their existence and the fact that they hold the Transform Symposium each year. Lorna Ross, Creative Lead and Manager of the CFI and her team are working on that exact principle of being in the community that they are working to change—in one of the most advanced medical facilities in the world. 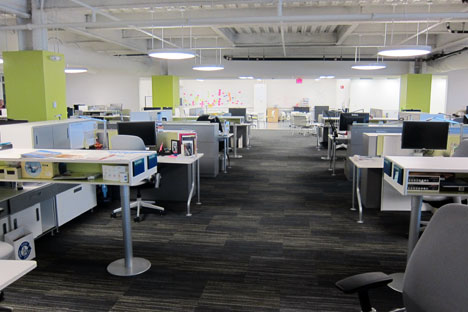 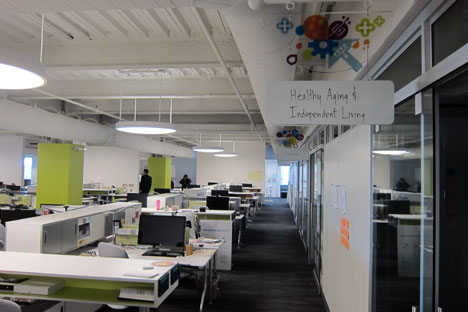 Although both Lorna Ross and Maggie Breslin, Senior Design Researcher at CFI both spoke, we unfortunately didn't get a lot of concrete example case studies. But we did experience the open, transparent, collaborative nature of the CFI throughout the rest of the conference (or maybe it was just everyone in Minnesota being so darn nice?). Those nice people of the CFI gave a few tours of the studio during the conference, which helped make visible the team's mission to "transform the experience and delivery of health care." 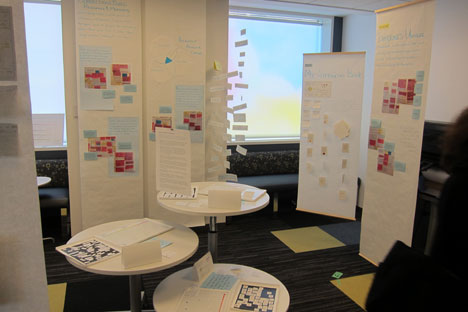 The Center for Innovation is purposefully housed in the Gonda building, which otherwise is home to strictly clinical occupants of the Mayo practicing outpatient healthcare. Like many design studios, CFI inhabits a large, mostly open space, with no cubical walls to divide individual work zones. These zones fill the middle, and are ringed by various non-traditional, focused meeting space. One side against the windows has long, tall tables and various playful exercise balls. Others are used temporarily as pin-up areas for specific projects. A sequence of about 5 small rooms are designated for each big project the teams are working on, from Community Health Transformation to Healthy Aging and Independent Living. There is also a small gallery corner and a "new tech" area, where possibly relevant tech like Fitbits and the Kinect are displayed for testing. 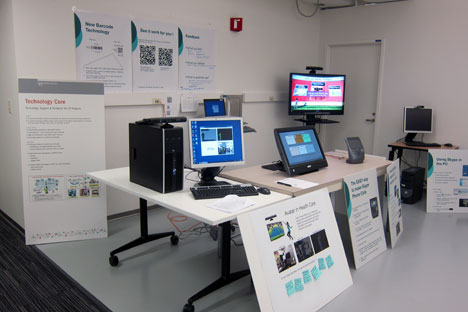 The CFI is not the most creative or playful studio we've seen, but its exciting to see a space like this in a medical context, living among the work they are doing, and working to change it. Lorna Ross spoke of the challenges she and her team have faced in their work, and made an apt comment. She talked of designers' quick tendency of making maps to define and guide, and recently realizing that what is needed most in navigating healthcare is a compass. Rather than plotting a path and pointing the way with maps, those combining design and healthcare need to be self-aware, with knowledge of our surroundings but the ability to maneuver as we go. This concept fit nicely with Thackara's of being in the community rather than intervening—aware and interacting, but not blindly guiding.

True to the open nature of the nice folks at CFI, they have kindly posted all video of all the speakers on the Transform site.