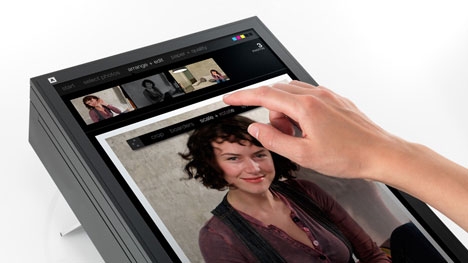 Seattle-based design consultancy Artefact feels the printer hasn't evolved apace with the computers they're connected to, and their SWYP concept is designed to address that. The See What You Print machine would boast a full-length touchscreen on its top surface, asking the user to interact with the printer rather than the computer. This is more easily explained via video, so have a look:

While I think the video looks great, for me the SWYP raises more questions than it answers (perhaps pointing to a necessary debate?). For me, the printer is not something I want to interact with: As the old ID-school saying goes, I want the toast, not the toaster. My printer is hidden inside a cabinet, I hit a button on my computer and open the cabinet door only when I want to pick up the printout. I haven't seen the top, sides or back of my printer since I first installed it. Do I need more interaction with it? If so, that now means I must make space on my worksurface for it, clearing out some precious real estate.

I don't deny that the SWYP printer appears to be a fine piece of industrial and interface design as experienced during the discrete act of printing, but I'd like to see explanations of how the entire photomaking ecosystem works together.