The premise of the 1984 cult classic The Last Starfighter was that an alien race used an arcade game to locate the planet's best starship fighter pilot. Top-scoring teenager Alex Rogan is whisked away to fight interstellar battles based on his superior hand-eye coordination. Sounds ridiculous...until you see today's teenagers playing X-Boxes, then see them sitting in trailers in Nevada and remotely manipulating drones in Afghanistan.

In the UK, Kingston University design student Lee Wei Chen found himself playing a lot of videogames; but absent any ambition to become a drone pilot (or the Post-Last Starfighter), he came to the conclusion that "the skills I had developed in the virtual world were useless in the real world. I wanted to make them useful."

The machine looks like an arcade style video console - but the bottom half of the unit is a washing machine, with the components' circuitry linked together. Therefore, the washing cycle is dependent on the success of the person playing the game, meaning that if they struggle, extra coins are needed to make sure the washing cycle is completed. 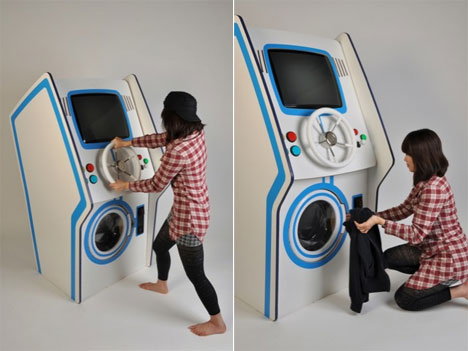 You could argue the concept is a bit more contrived than actually useful, but it does raise the question: Is it possible to convert the countless hours spent by youth playing videogames into actual skills besides flying drones? And if so, don't we have a potentially exciting and addictive training tool on our hands?