2011 IDSA International: The Art of Storytelling 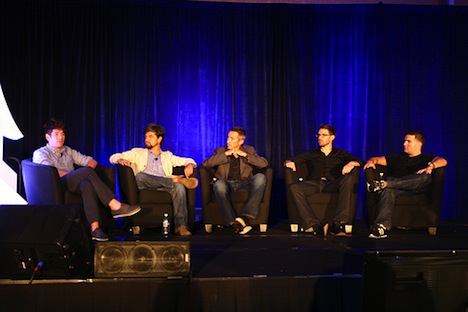 The second day of keynotes at the 2011 IDSA International conference in New Orleans was framed up as "Methods and Means" but the real theme of the day is the power of storytelling. With inspirational presentations from Core77 friends Scott Wilson (MINIMAL) on the Tik Tok+Luna Tik and Tom Gerhardt (Studio Neat) on the Glif, the real star of the day was Kickstarter. The crowd-funding site shared headlines in these design Cinderella-stories—the success of the Tik Tok+Luna Tik came on the heels of an unfortunate business venture for Wilson and Gerhardt and his Studio Neat partner were able to quit their dayjobs to dedicate their energies to a dream of innovative product launches. Luckily, Kickstarter co-founder Yancey Strickler was on hand to share his own unconventional success story surrounding the unique platform.

Founded by Strickler, a former music writer, and Perry Chen, a former gallerist, musician and jack-of-all-trades, in the two years since it's launch, Kickstarter has funded 12,000 projects—about 44% of the projects featured on their platform. In a few weeks, the team projects that they'll hit an impressive crowd-funded number: the $100 million-mark. The number is not only a powerful testament of the platform's ability to connect people in a real and very human way, but it's also a lens onto a new type of crowd-sourced economy. Although the Kickstarter team intentionally provides no guidance to users on how to build a project, typical projects feature some sort of pitch video, what Strickler calls an anti-commercial, and a scale of pledge rewards for backers.

"Working with the Kickstarter model, having 6000 backers is like having 6000 clients," jokes Tom Gerhardt from Studio Neat. A great example of the "every project is a story" idea, one of the most powerful tools for driving the success of the Glif on Kickstarter was their use of video. I loved learning that Wes Anderson's offbeat, helvetica style was the creative inspiration for Studio Neat's video productions. Throughout the creation process—from pitch, to manufacturing, to assembly—Studio Neat documented and shared the story of the Glif in a lighthearted and personal way with their backers aka cheerleaders aka clients.

"The person who says it cannot be done should not interrupt the person doing it," shares Scott Wilson of MINIMAL. This personal "Just Do It" mantra has helped propel a former global creative director at Nike to personal success as the head of his own design firm and a poster child for design entrepreneurship. Why would an established designer choose to Kickstart a personal project? It's simple, explains Wilson. After being turned down by an established soft goods company, the crowd-funding platform allowed him to realize the project solo, simply, with no risk and no money up front. In 3 months, the Tik Tok+Luna Tik became "an instant global brand—from concept to 21,120 units globally fulfilled in over 50 countries in 90 days." This phenomenal success left Wilson with a few words of wise advice for designers hoping to follow in his footsteps:

The flipside of these lone-designer success stories, Ben Kaufman, co-founder of Quirky, has created a way to reward the collaborative nature of design. Using an algorithm to create a reward system, Quirky is able to mathematically track people's input in developing a product and in return, pay a dividend on products launched to market. The numbers are pretty staggering—there is an average of 800 "owners" on every Quirky product and the company launches two products a week. Thinking back on Clay Shirky's argument about harnessing cognitive surplus, Quirky is a testament to the power of tapping into a global braintrust by soliciting (and paying for) co-creation.

With the tools and technology out there to help everyday designers on the road from concept to creation, there are few excuses these days for inaction. "Be Bold," Strickler reminds us. "Because every project is a story."

2011 IDSA International: The Art of Storytelling