Get on the Fast Track to the Mobile App! Windows Phone App Design Challenge 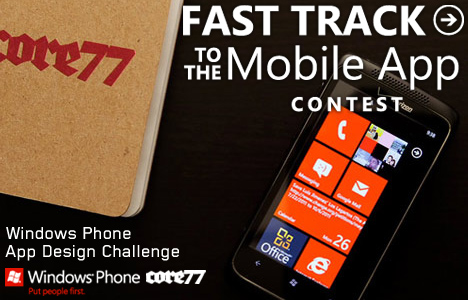 Calling all mobile app designers! Core77 and Microsoft have teamed up to put you on the Fast Track to the Mobile App—an app design challenge for Windows Phone. We're challenging you to push the boundaries of productivity by designing an app for Windows Phone that not only allows you to work anywhere, but also rethinks how to get things done in our mobile (phone) world.

Register now and submit as many app designs as you want through November 18, 2011 (only one app per designer can win). No coding necessary—submit prototypes, Photoshop mock-ups or scans of your sketchpad. Let the best apps win! fasttrackapp.core77.com

Get on the Fast Track to the Mobile App! Windows Phone App Design Challenge