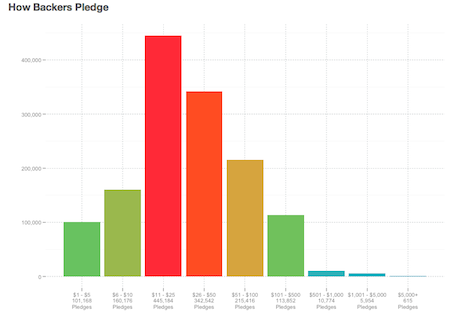 Some of you one million backers have really knocked our Kickstarter picks out of the park—in fact, this weekend saw the successful funding of Teagueduino and Makeshift Magazine, while Stefan Sagmeister's "Happy Film" will be funded in four days. Jon Kemnitzer's "Skate Bench No. 1" is just over $400 short of funding with less than a week to go.

Last week marked an important milestone for the crowd-funding site—a woman pledged to fund a film and in doing so, became the millionth person to have ever backed a Kickstarter project. Not only did the company hit their millionth backer, but as co-founder Yancey Strickler mentioned at this year's IDSA International conference, last week Kickstarter backers pledged more than $100 million to projects. "To put this in some context, the 2011 fiscal year budget for the National Endowment for the Arts is $154 million," explains Strickler. To mark the occasion, today the company released a fascinating look at the backers—how much is pledged, what percent are repeat backers and success rate.

It's hard to remember a time without Kickstarter. The site has become synonymous with crowd-funding and is an invaluable tool for designers and creatives. As the Kickstarter folks can best explain, "The real value of a backer is so much more than money. Backers provide encouragement, support, and public validation. Their dollars have already brought more than 13,000 projects to life, with many more to come. We're sure every creator will join us in saying: thanks to all million of you!"