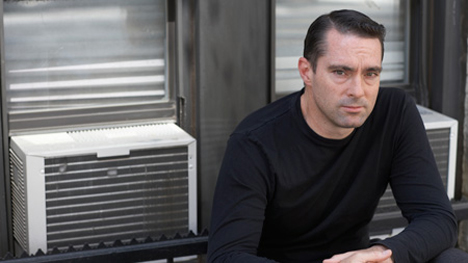 Interview by Will Evans, Semantic Foundary

In anticipation of next week's DMI Design at Scale conference, Will Evans sat down to chat with Cameron Tonkinwise, Associate Dean for Sustainability at Parsons The New School of Design. Tonkinwise will be speaking at DMI about recent advances in collaborative consumption and the rise of the sharing economy. Here, Tonkinwise gives us a some background on these topics in the context of his academic background and the rise of social sharing service systems.

Will Evans: So Cameron, how did become interested in exploring these ideas of collaborative consumption? Cameron Tonkinwise: So, it is kind of a long and tedious story. I was doing an arts PhD at Sydney University studying Heidegger, heavily under the influence of post-structuralism. Soon, most of the post-structuralists academics left and it returned to more traditional discourse, which left me looking. So I went to work with Tony Fry [Ed Note: The British design theorist and philosopher] and finished my PhD in design. Now, the Eco Design Foundation , a think tank, that was trying to advance sustainable design as a kind of topic worthy of thinking. We partnered with companies, arguing that what matters most is to think about greening systems rather than just greening products.

During that time, I spent a lot of time trying to work out what are green economies, what are sustainable economies, and caught onto the idea of decoupling use and ownership. At that point the Europeans started doing a lot of work on what they were calling "product service systems." PSS are a 'dematerialization strategy' for the European economy—a way of getting growth but with less material impact.

And PSS decouples ownership with use... Right—and you also increase the quality of the services while decreasing the quantity of material stuff. I got heavily involved in that movement and saw my job in the early '00s as basically importing European discourse into an Australian context.

If a lot of this research is rather dated back to the early '00s, why do topics like sharing economies and collaborative consumption seem like the hot new topic these days? It's amazing. It's really incredible because most of this research is ten-to-fifteen years old, but transferred to the United States it seems like cutting edge.

So many people are aware of the more notable examples here in the States, new business models like AirBnB or ZipCar—were these the first examples of collaborative consumption or sharing examples here? Not at all. There was a bit of it in America, strangely enough, with the chemicals management industry. So when people start spilling chemicals on a farm and it kills thousands of fish, nobody blames the farmer. Everybody blames Dow Chemicals. Dow started thinking that, in addition to selling the chemicals to these farmer they should also go down there and help the farmer store it and say, "Look, you need to build a shed and you need a little dispenser and make sure you don't kick it over." The innovation came when they decided that they could sell pest control to farmers—not chemicals, which meant they could control how their chemicals where used, with the added benefit of their profit motive moving from selling more chemicals to using less. So then the chemical company owns everything, they just sell the functional solution—no pests—do I have that right? Right.

How do you educate consumers and how do you teach designers to reframe their notions of how we solve these problems—still creating viable solutions, but ones based on collaboration or sharing? So, lots of questions and lots of different answers. The one answer is a kind of Heideggerian answer: it is a revealing rather than a teaching of some new truth. People hear about sharing economies, or shared ownership, and they get freaked out. What you need to do is take them back and ask, "How many chairs did you sit in today?" And they think, "I sat on the subway, and I sat at the bus stop and I sat on a chair at a café and I sat in a chair at a lecture and then I finally sat on my couch." And so we have to ask, of those chairs, which of those did you own? So the point is that throughout the course of the day, people are engaging in all kinds of sharing activity already, it's just not framed that way.

Now, it is true that in a city there is obviously a hell of a lot more sharing going on than in the suburbs because of density. It's something people can't see—the whole reason behind suburbanization was in order to—

To fuel mass hyper-consumption, right? Right. To free people from having to deal with other people and sharing economies while gaining greater autonomy by owning their own stuff. You never need to talk to a pool guy or a lawnmower or schedule a carpool, because even though these systems can mean decreasing or eliminating the cost of ownership, there is an unstated social cost to sharing that must be considered.

But wasn't that the vision promoted in the late '40s and early '50s to both grow the economy and to transition all those factories away from war production to something that could generate corporate profits through consumption? So do you think the last 50 years is the anomaly—the hyper-consumption model? Absolutely. So I would take it even further. I think one of the most fantastic books is Delores Hayden's The Grand Domestic Revolution which documents a bunch of what she calls "Material Feminists" who from about 1870 to 1890, were experimenting with socialized domestic production. They did this for three reasons. One, urbanization was happening and they recognized that density would allow this. Two, they were using steam technology, which is a large-scale technology, so it made sense for women to start doing laundering together, cooking together and child care together because the steam technology was more efficient that way. And then the third reason was actually a kind of feminism. The thought was they should come together while they do their cooking and preferably get paid for doing these work activities.

So almost the socialization of domestic work. Absolutely. And the last was an explicit socialist discourse. So there were a bunch of Fabian Socialists who were experimenting with these ideas. The Chelsea Hotel, before it was famous in "Sid Nancy" was actually a bourgeois boarding house in which the apartments were designed so that you did nothing in them other than sleep and socialize because all of the production was being done in communal dining halls, communal childcare and communal laundering.

I think is really important to recognize, particularly for the sharing economy now, that suburbanization and the argument about the kind of autonomy that that granted, a kind of Kantian freedom, which led to industrial design being about the design and manufacture of products consumed in the suburban home—not some shared resource.

And that was explicit in a lot of the advertisement for these new products, the freedom and autonomy it offered suburban women. Absolutely. Yeah. So that is a legitimate discourse. It is of value. What is important to realize is that any discourse on the sharing economy must actually tackle questions of freedom, autonomy as well as convenience. It actually has to take that on. And that is where design comes in. So design actually has to materially represent the sharing economy in relation to the convenience and autonomy of individuals. Designers have to realize that the sharing economy means a rethinking of the systems of production as well as the products, and how people will use, interact and find value, meaning and a sense of autonomy in these new modalities of consumption. This is why it's relevant to designers. At the conference, we'll be discussing the recent technological and economic changes that are making sharing economies more viable.