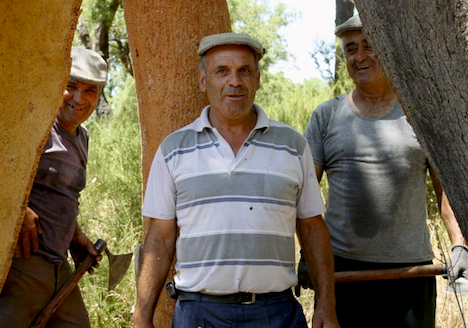 This is the second piece in a series exploring cork from designer and educator Daniel Michalik. As a prelude to this series, Michalik produced a beautiful photo gallery documenting the cork harvest.

One morning in mid-July, I drove out to the cork forest of southeastern Portugal with Joana Mesquita and Raquel Castro of Corticeira Amorim (the world's leading producer of cork stoppers) looking for descortiçadores: the men and women that spend three months a year stripping bark from cork oak trees. What I found was an industry unlike any other—one that is predicated on environmental and cultural stewardship as a means to economic success. A natural resource that grows more robust and healthy with regular and responsible development.

Portugal is the world's single largest supplier of cork, producing over 53% of all exports of cork stoppers and related products. This small country boasts almost 1 million hectares of cork forest. Of these, many are wild, natural forests like the ones I have visited. It is estimated that Portugal's cork forests absorb 14 million tons of CO2 from the atmosphere every year. A cork oak is harvested every 9 years, and the forests are on yearly, rotating harvest cycles. While one area is harvested, the others are left alone to grow. 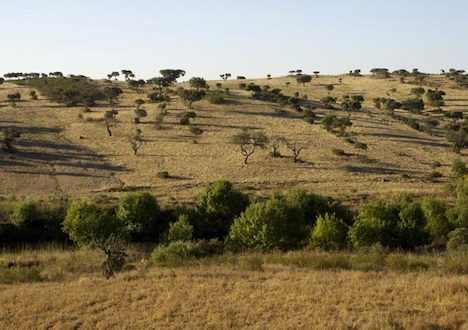 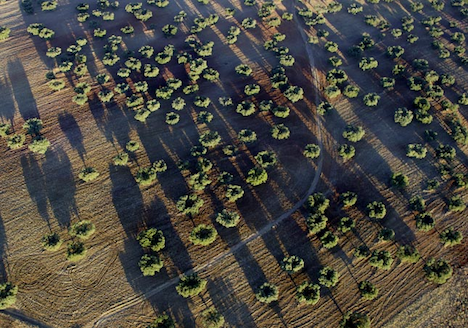 Trees damaged by human hands will not produce profitable raw material, so a unique model of natural material sourcing has developed in which profitable extraction leads to numerous environmental improvements. Forest protection (and protection of related habitats) is the key to maximizing the profitability of the yearly cork harvest. It is estimated that dozens of species would be extinct were it not for the cork forest, including the Iberian Lynx and Imperial Eagle. The concentration of biodiversity within the European cork forest makes it one of the world's best models of wildlife conservation. 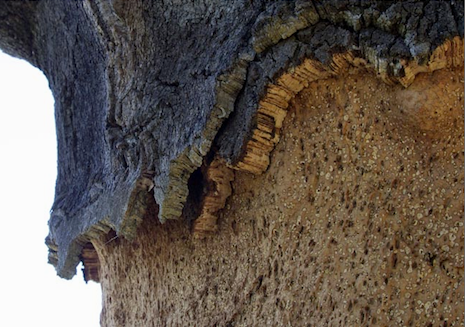 The cork forest, or montado, is a hot, dry place in the summer. Daily temperatures easily run past 35 °C (95 °F) and the dust and flies are incessant. Still, between May and August the descortiçadores work from dawn to dusk at a brisk, almost manic pace. Speed is key because at any other time of year the bark grips fast to the trunk, making any harvest impossible.

We followed the farm manager into the forest, parked our suffering Peugeot in a dusty lot, and climbed into a tiny work van that bumped along impossibly twisted dirt paths, through unforgivingly thick brush, followed by a hike through the brambles to a ridge overlooking the montado. All around us were the cork trees in various stages of being denuded.

We found roughly 30 men working in teams of 2-3 to harvest a dozen or so trees in the area. Some balanced like tightrope walkers on narrow branches, effortlessly swinging their razor-sharp axes and flipping tubes of bark off the branches. Others worked around the main trunks, swinging as high above their heads as possible. They removed 5-meter long sections of cork in a single piece. The bark from an entire tree trunk would be removed in two sections; an entire tree could be stripped in 15 minutes. The mood during the harvest was energetic and rowdy. Axes swung incessantly, jokes were made and songs were sung. The heat and biting flies and dust were meaningless to the men in the trees.

The descortiçador uses an ax called a machada. Roughly 1 meter long, the manchada has a wooden handle that has been shaped into a wedge at the bottom. The business end of the tool is a hand-forged iron, ginkgo-shaped and slightly larger than a hand, kept razor sharp by its owner. It is common to see men walking from tree to tree with the iron resting on the shoulder, the handle hanging down the back. 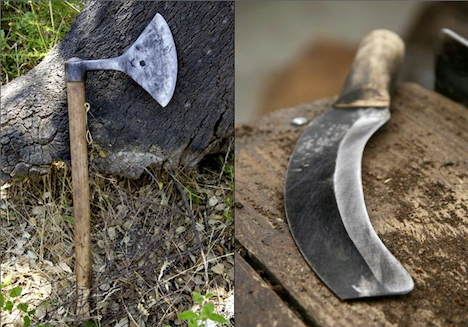 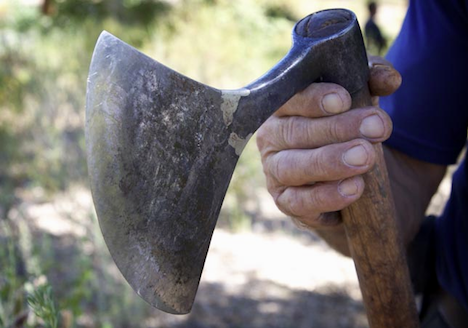 The technique to harvest a cork tree requires a one or two-handed swing: quick, forceful and precise, allowing the blade to penetrate the bark without scarring the cambium underneath, ending in a twisting motion to loosen the bark. The descortiçador swings his way along the length of the tree, repeating the technique until a rectangular section has been cut. He then flips the ax around, wedging the shaped handle end between the cambium and the cork bark. With a few twists and pulls, the length of bark pops from the tree, perfectly intact, and the rest of the tree is left untouched. Usable bark sections are on average 1-2 meters in length and 3-5 cm thick.

While I was wishing I had donned something smarter than a black t-shirt, I noticed the teams of women dressed in long-sleeved flannel shirts, heavy work denim, hats and gloves. The women are responsible for gathering the raw material together for transport out of the forest, as well as marking the stripped trees with white paint to indicate the year of harvest. The bark grows from the inside out, so the number will remaining visible for the necessary 9-year growth period. 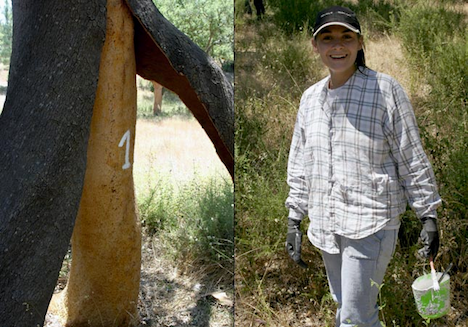 After harvest, all trees are painted with a number corresponding to the year of harvest. This is normally done by women during the harvest, who also hand-carry loads of bark lengths from the trees to the tractor. A tree is harvested every 9 years.

A tractor pulling a flat-bed trailer winds through the forest, piling high the freshly peeled skins and transporting them back to the hilltop staging area. Here the stopper-ready bark is separated from the virgin cork (bark from the first two growth cycles of younger trees). Everything is roughly trimmed by hand to uniform dimension and stacked in long rows with astonishing speed and accuracy. The lengths of tree bark will then be loaded onto truck bound for the nearby factory, the first stop on a fantastic voyage of use and re-use, value recovery and value-adding. 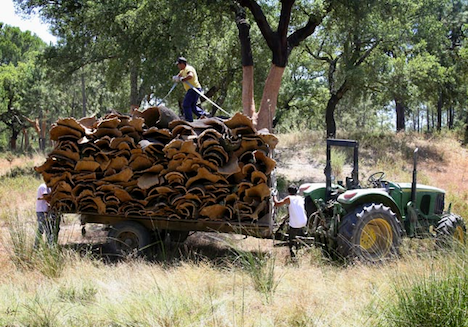 Tractor hauling away an hour's worth of work from the forest to a local road, where it will be picked up for processing.

After my trip to the forest I sat down with Antonio Amorim, CEO of Corticeira Amorim. During our conversation, he spoke of his company's ability to source only the finest material using historical ties to generations-old farms as well as satellite imaging of untapped forests. He predicted that within 10 years, Amorim would "exploit" 20% more forest heretofore untapped. I reflexively soured at the word until I realized that in this case the meaning inverted. In the case of the cork forest, exploitation implies carbon absorption and habitat protection. It implies the preservation of traditional hand skills and farming practices. It implies the production of a product that is both recyclable and biodegradable.