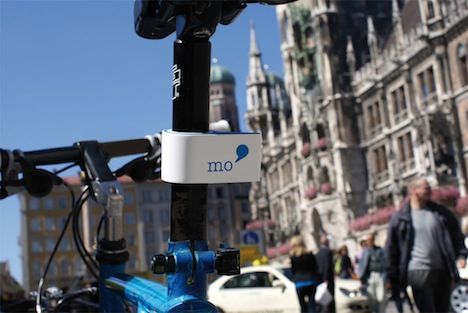 What if you were rewarded for biking to work each day? What if your city had a fleet of bikes and cars integrated with its public transportation system. Introducing mo, a new concept in urban mobility. The team at LUNAR Europe teamed up with the University of Wuppertal and Green City e.V. to concept a full urban mobility system for Munich, Germany that could be scaled for cities around the world.

The mo system, at it's heart, is a fully integrated share model which connects existing public transportation options with rental vehicles: bicycle and cargo bikes, electric bikes and cars. The fleet is spontaneously accessible allowing citizens to transport bulky goods or jet-set speed off for a quick breath of country air. A smart phone app allows users to book a vehicle, use location-based services to locate a hub, organize group meetings and access user information. And the best part of all? The more you bike, the more rewards you accumulate. mo rewards bicycling (even on your own bike) with a point system based on miles biked that can be put towards electric bike charging stations or even car rentals. 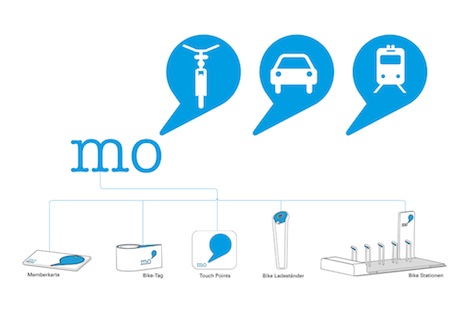 80% of all distances travelled in Germany are shorter than 20 km. Armed with this fact, the LUNAR Europe team began, "several phases of research, expert workshops, concept development and refinement," explains Roman Gebhard, partner and creative director of LUNAR Europe. "Together with [Green City, the University of Wuppertal,] and traffic experts of the Munich city council, we developed the mo system." Using a user-centered approach, the team quickly realized that in order for a proposed urban mobility alternative to succeed, the system had to serve the needs and wants of the city-dweller on-the-go. We especially like the combination of physical and digital interfaces spread out across the city landscape—retail partners, public kiosks, "check-in" stations and rental locations make mo a part of a citizen's daily routine.

In the initial stages of the process, the designers used various methods such as online surveys and qualitative in-depth interviews with potential users to select the right approaches for the concept, later refining it by means of various 'experience prototyping' methods such as 'personas' and 'scenario creation'. In order to ensure that the concept remained within feasible limits, interviews and workshops were conducted with mobility experts and representatives of the city of Munich so as to gain an in-depth understanding of the relevant parameters for implementing the concept in Munich. 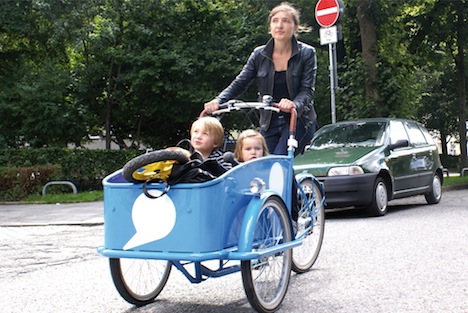 The video below outlines their approach and explains the concept in the most easily understood way by showing "real" users interacting with mo.

We're excited to see where the mo system might go! LUNAR Europe has successfully worked with Green City in the past to start a bike sharing project in Germany that was later acquired by the German railway company. As city-dwellers, avid cyclers and carshare users ourselves, we'd love to tap into a mo system here in New York City. Commissioner Sadik-Khan, hope you're listening!