A Designer's (Amateur) Review of Drive 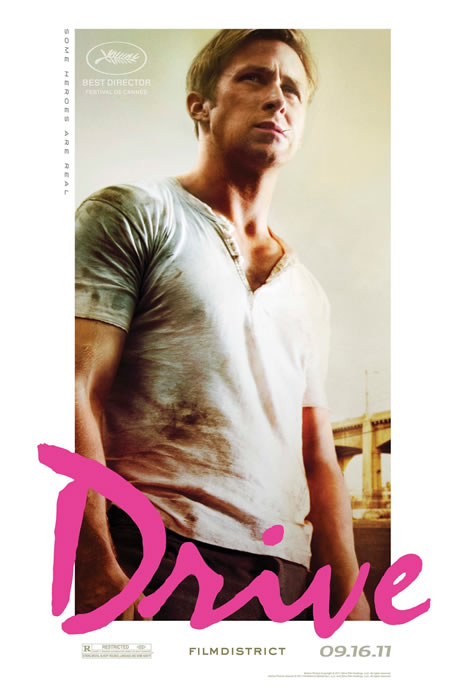 Much of what compelled me to write this post was driven by feeling that lingered after watching Drive earlier this week.

"Drive reminded me what it can be like—what it ought to be, but so infrequently is, like—to go out to the movies. I was buzzing when I left the theater. I'm buzzing still."

The other mitigating factor was the film's jarring use of the hot pink Mistral in its posters and title sequence. While I have heard a few people lament the randomness of the choice, it (and its color) couldn't have been a better fit.

Like the now famous satin scorpion jacket* Gosling's character dons throughout the film, Drive is built as a balance of retro-chic and a modern tale of existentialism. The film mirrors so much of our pop (and design) culture banking on nostalgic remix. Director Nicholas Winding Refn weaves together the art-house qualities of Tarantino or David Lynch coupled with the charisma and style of Bullitt's McQueen and Eastwood's classic quiet machismo. These vintage inspirations are coupled with more recent flashes of Grand-Theft-Auto-esque gore and intensity while costumes and aesthetics seem to be pulled straight from this autumn's hippest lookbooks.Again this mood was reflected in Orr's review:

"The narrative and stylistic elements of Refn's film [Drive] are familiar--indeed it is awash in echoes and allusions—yet they are assembled into something fresh and vital and astonishingly intense."

Looking deeper though, this remix reverberates with something else; a lack of history (plot) or authentic emotion. The always wonderful A. O. Scott captured this sentiment in his review:

"Drive is somber, slick and earnest, and also a prisoner of its own emptiness, substituting moods for emotions and borrowed style for real audacity."

This brings me back to the choice of Mistral. For a film that is so conscious of its appearance and identity, the choice would never be random. The pink type, synth-pop music ("Nightcall" by Kavinsky in case you are curious), and birds-eye shots of Los Angeles are more suitable for some '80s police flick than this dark thriller. But it is in this that they succeed so well. The hyperactive paint strokes (that vaguely resembles blood) suggest a staccato flair that is purposeful absent in the film. This contrast in mood mirrors the film perfectly—the calm soft features of Gosling, coupled with the intensity of magenta script.

Ultimately this campy treatment, one that is so easily pegged for Tony Montana, defies its surface stereotype. It, like this film, breaks the genre. Drive is far from a perfect film, but for what it lacks in depth and complexity, it makes up for in strides with its precision, aesthetics, and style. And that sounds a lot like 2011.

*For those that are really interested in the sartorial nuances of the film, GQ has a ridiculously thorough run-down of the film. Of course they do.**

**The jacket is now apparently already on sale. Wow! Just in time for Halloween.

A Designer's (Amateur) Review of Drive