An Ongoing Review, for Industrial Designers, of the Steve Jobs Biography 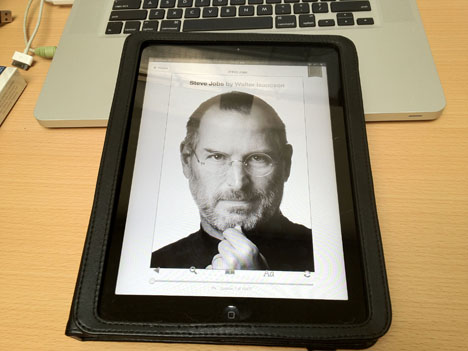 I'd been meaning to wait until I finished Walter Isaacson's Steve Jobs before committing to an entry, but I'm only 1/3rd of the way through and feel compelled to tell fellow ID'ers what they might glean from this book that's relevant to our field. Whether you're an Apple user or not, this is a story of a man with a powerful appreciation for industrial design that has affected and will continue to affect the industry that makes for worthwhile, if flawed, reading.

What I mean by the "flawed" part is that author Isaacson is not well-versed in design and makes, thus far, at least one gaffe I consider pretty egregious:

As Jobs's design sensibilities evolved, he became particularly attracted to the Japanese style and began hanging out with its stars, such as Issey Miyake and I.M. Pei.

I.M. Pei? There's no doubt that he's a star architect, but a Modernist one with no particular attachment to "the Japanese style." After reading that I thought Holy cow, is it possible Isaacson actually doesn't know the difference between Chinese and Japanese people and lumped Pei in with Miyake based on geographical ethnic proximities? To me this is akin to calling Le Corbusier a German architect.That obvious error aside, the story thus far does provide a good look into how Jobs gained an appreciation for design—and how he would later apply that appreciation to his business, with both success and failure. Without revealing direct spoilers for those looking forward to reading the book, I'll mention that the reader is shown how the design of the very house Jobs grew up in informed his attitudes towards design; an early lesson imparted by his father regarding the parts of an object you don't see, which would later lead to jobs obsessing over the plating of interior screws; how paving stones viewed in Florence during an escapist vacation would wind up, 20 years later, underfoot in certain Apple stores; and the agreement that led to ID'er Hartmut Esslinger moving from Germany to California to start frogdesign.

As in the business world, industrial design in Jobs' story does not exist in a vacuum, so we're also given a good look at how Jobs' passion for such intersected with the business and marketing world with both sucessful and disastrous results.

I'll keep you posted as I proceed through the book.

An Ongoing Review, for Industrial Designers, of the Steve Jobs Biography