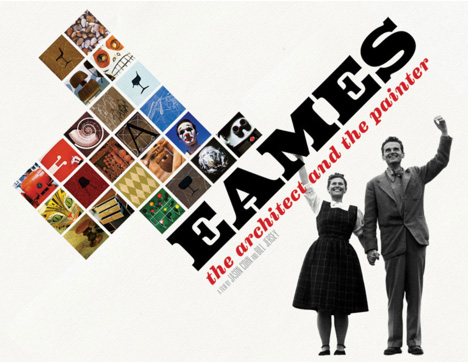 We're not sure how this one slipped by us—the trailer has been online for nearly two weeks now—but with the (limited) release less than three weeks away, the trailer for Eames: The Architect and the Painter is sure to generate a bit of buzz for "the first film to be made about Charles and Ray since their deaths."

The husband-and-wife team of Charles and Ray Eames are widely regarded as America's most important designers. Perhaps best remembered for their mid-century plywood and fiberglass furniture, the Eames Office also created a mind-bending variety of other products, from splints for wounded military during World War II, to photography, interiors, multi-media exhibits, graphics, games, films and toys. But their personal lives and influence on significant events in American life—from the development of modernism, to the rise of the computer age—has been less widely understood. Narrated by James Franco, Eames: The Architect and the Painter is the first film dedicated to these creative geniuses and their work.

Filmmakers Jason Cohn & Bill Jersey tapped a never-before-seen "cache of archival material, visually-stunning films, love letters, photographs and artifacts" from over 40 years of work and collaboration to present "a definitive and unprecedented cinematic foray into the private world of Charles and Ray Eames' [studio]." In any case, it's as good as reason as any to listen to the dulcet tones of James Franco's baritone narration for just under an hour and a half.

Eames: The Architect and the Painter premieres in New York, L.A., and a handful of other cities on November 18, with over a dozen additional one-off or limited runs in other locations throughout the U.S. both before and after the official release date. See the full schedule of screenings here. (Kottke also notes that the DVD is already available for pre-order on Amazon, just in time for the holidays.) 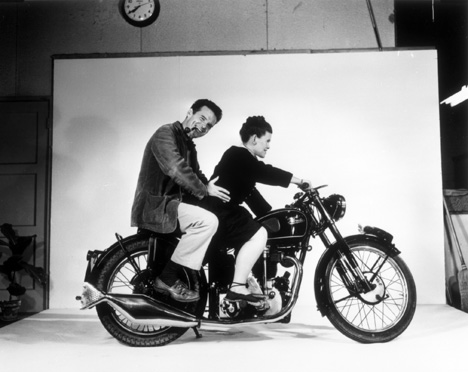 Charles and Ray Eames posing on a Velocette motorcycle, 1948, as seen in James Cohn & Bill Jersey's documentary Eames: The Painter and the Architect, ©2011 Eames Office, LLC.