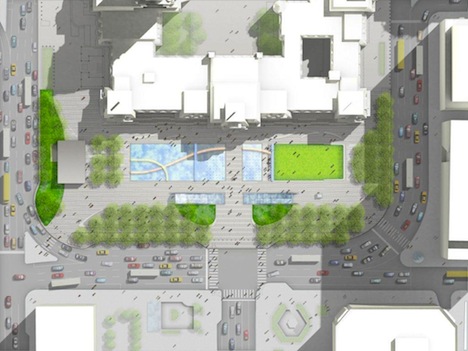 On the west side of City Hall in Philadelphia sits Dilworth Plaza; a public space designed in the mid-1970s as an urban renewal project. The plaza received funding through the federal Transportation Investment Generating Economic Recovery (TIGER) grant program and is in the midst of a major makeover.

Philadelphia's Dilworth Plaza lies above several levels of transit infrastructure and is known to those that use it as a labyrinth of granite walls and stairs as well as a home for the homeless and the current site of Philadelphia's Occupy Wall Street tent city. In fact—since the beginning of the Philadelphia Occupy Wall Street protests in October this is possibly the most Dilworth Plaza has ever been used in its 40 years.

Dilworth Plaza hosts a number of aesthetic and logistical issues which include: surfaces cladded in stark granite, various level changes confusing to everyone and impossible for those with disabilities, no clear entrance to the transportation center below and vacant and isolated arcades commuters must walk through to get to the concourse.

In the 1600s, the space that Dilworth Plaza (formerly known as Center Square) and City Hall currently occupy was envisioned by William Penn to be the cultural, social and commercial hub of Philadelphia. Failing to meet any of Penn's wishes in its current incarnation, Philadelphia-based architecture and landscape architecture firms OLIN and KieranTimberlake have teamed up with the City of Philadelphia Office of Arts Culture & the Creative Economy (OACCE) and the Center City District to rejuvenate this historic civic space as the cultural, social and commercial hub it was meant to be.

Construction on the new plaza will begin this fall and is expected to be completed by early 2014. The new Dilworth Plaza will feature amenities such as: a cafe with indoor & outdoor seating, a large lawn, a kinetic fountain, tree groves, space for events and a new gateway to and from the transportation center below. 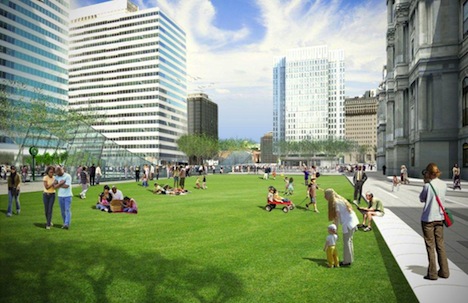 After many design iterations —due to concern for blocking too much of the view of City Hall—the main gateway to the transportation concourse below has taken form as two 20-foot tall, glass (yes, no supporting structure - all glass) sloping pavilions. The shatterproof glass will be self-cleaning and have 3-foot wide channels around the sides that collect rainwater to irrigate the lawn and trees. 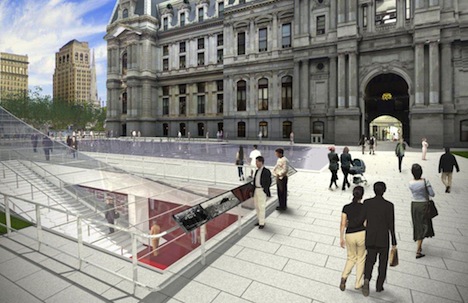 Perhaps the highlight of the plaza is the fountain—a celebration of the location's history as the city's first public fountain and pumping station. The fountain is made up of "pixels" that can be programmed individually to become a fountain or paved surface. This flexible design allows for it as paved surface to accommodate a variety of activities including concerts, special events, public markets, winter ice-skating, and possibly free screenings of live performances at the Kimmel Center, movies and sports on large digital screens.

Even more impressive as a fountain, this space will fill with water, colorful lights and mist as a part of American artist Janet Echelman's permanent installation. Known for her monumental fabric sculptures, Janet took note of the locations history and the need for keeping maximum visibility of a historic landmark so she chose to work with a new material; water. Janet wanted to celebrate both water and the activity going on below ground, so the fountain—with mist and lights—will follow the tracks of the passing subway cars below. The five-foot wall of mist is made up of atomized water particles and compressed air, enough to be seen but so fine that it won't make things wet. This "x-ray of the city's circulatory system" will not only be impressive visually, but will also be an engineering feat due to this tight "sandwich" of the various levels below ground. 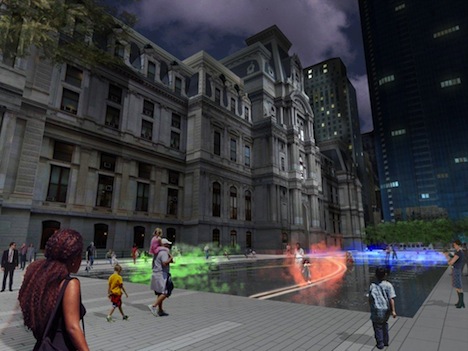 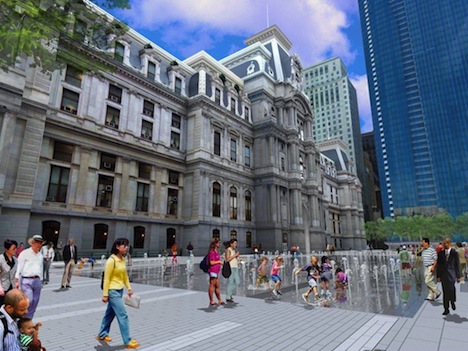 Transforming Dilworth Plaza, an exhibit on the plaza's history, planning, and design process will be featured at the Art Gallery at Philadelphia City Hall through November 18, 2011.