"There's no such thing as bad weather, just bad gear" ...or so the saying goes. Bike Snob NYC recently brought my attention to a new-ish cycling accessory that is perhaps more an example of the latter than a measure against the former. The ambitiously-named "Uberhood"—BSNYC notes that some might mistake it for "the new name for Williamsburg, Brooklyn"—is a handlebar-mounted umbrella for the semper paratus cyclist, purportedly equally useful in rain or shine. Either way, Uberhood has you covered:Rain: When skies are grey, the Uberhood always provides a silver lining. Elongated design and aerodynamic shape means rain is repelled; wind resistance is low; and you STAY DRY.

Sun: Think of it as SPF 20,000. With the Uberhood special silver lining reflecting the sun, you won't just look cool, you'll BE COOL anywhere and everywhere you ride.

Well, in terms of staying dry in rainy conditions, fenders—conspicuously absent in the majority of their product photography—should be the first order of business. (A helmet could also be considered a necessity when traversing slick streets with reduced braking power; the fact that it covers one's head is just a bonus.) 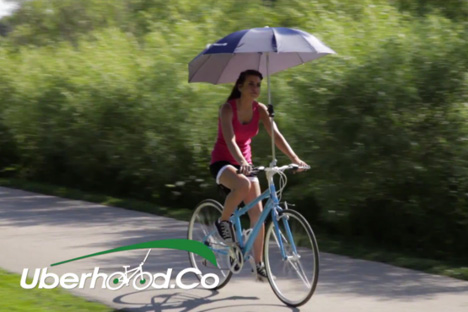 Metacommentary aside, I find that I literally face a substantial amount of, um, frontal drenching when riding in the rain... though perhaps the Uberhood provides sufficient drag to preclude this problem. 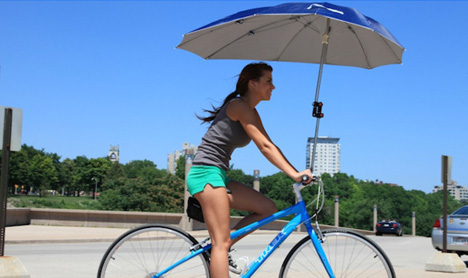 For what it's worth, the quasi-aero form factor loosely resembles another (handheld) umbrella design we've seen before, though I'm skeptical as to how it would hold up in the gusty conditions that characterize moderate to heavy storms here on the East Coast. (Curiously enough, none of the product photography shows riders in any sort of downpour...) 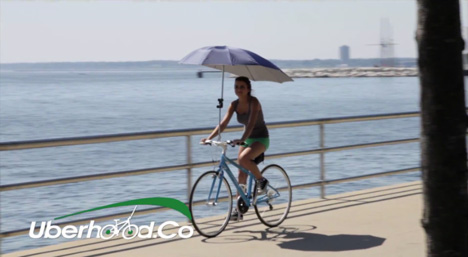 One of my colleagues (who shall remain unnamed) pointed out that the assembly video features quite a bit of suggestively-positioned thigh: 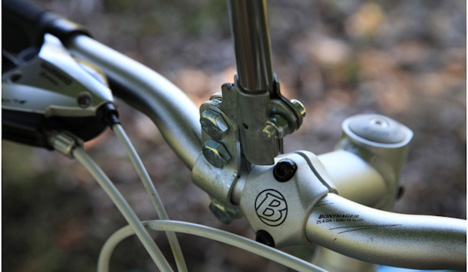 And if the mounting hardware is utilitarian at best, the folding mechanism strikes me as rather inelegant, even ad hoc—the demo video augurs many a smack in the face (0:11) for inexperienced users:

Similarly, the folded Uberhood unapologetically occupies—verb du jour—a not-insignificant piece of real estate in a rider's field of vision. Fanciful though it may be, I'd propose a telescoping version that could be integrated into/on the head tube, something like a cross between Massimo Battaglia's "Popi" umbrella concept and the University of Oregon's retractable kickstand prototype. 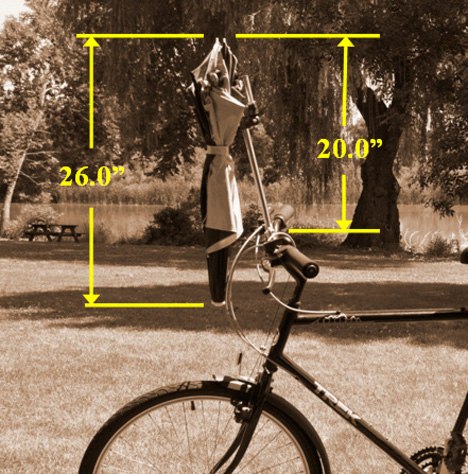 Realistically, though, I have no idea who would actually buy the thing: any hardcore commuter is characterized by his or her willingness (and gear) to deal with adverse weather conditions, while a leisure rider is essentially defined by mild weather. Unless it rains every day for months on end, an everyday rider would probably want to remove it for fair weather commutes... adding an extra step to every potentially inclement trip. Then again, I imagine rain pants are at least as much trouble, and maybe I just haven't spent enough time in Portland. 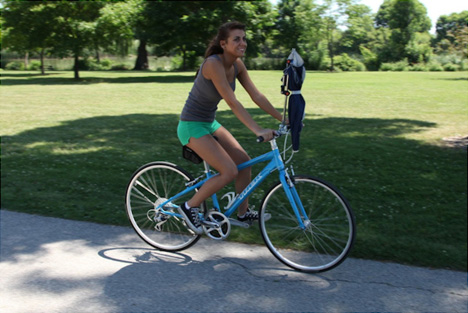 And, lest the Uberhood somehow garners the Lance cosign—premium yellow colorway and all—a bib-bedecked weekend warrior wouldn't be caught dead under one of these. 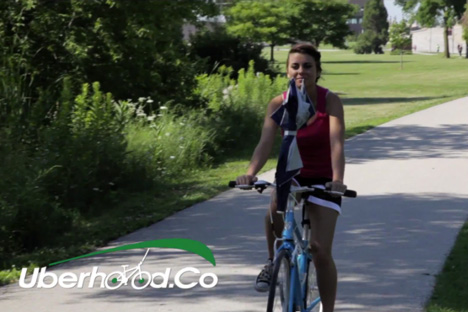 So maybe it's best suited for a target market that might be construed as the diametric opposite of the carbon-fiber-fetishist: the hapless delivery men who seem to be the only cyclists on the streets (of New York, at least) during moderate downpour. Suffice it to say the Uberhood is definitely an upgrade from the DIY garbage bag poncho.

Of course, the 7/8” clamp of the Uberhood won't fit on any standard 25.4mm or 31.8mm handlebar, so all of the above comments and criticisms are moot... and as for the name, my vote for "überhood" still goes to Sruli Recht.