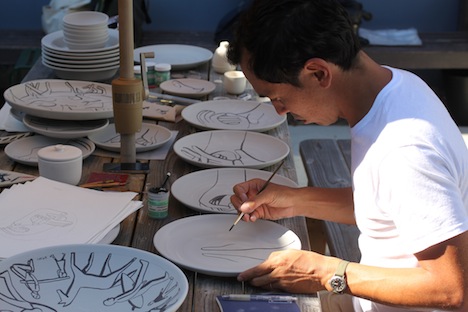 American pottery manufacturer Heath Ceramics has had their kilns burning for more than half a century, employing craftsmen at their Sausalito, California factory to produce tableware and tile. In recent years, Heath has been creating focused, hand-crafted collaborations with a carefully curated list of designers and artists including Christina Kim (Dosa), Roy McMakin and chef Alice Waters. "Our collaborations are inspiring for those of us working on design at Heath, as well as the artists and designers with whom we collaborate," explains Creative Director Cathy Bailey. "They are true collaborations where we all are learning something new and opening our minds to different possibilities in our work. They are also inspiring on many different levels, from new techniques to new perspectives offered by the artists and designers we're working with to create and craft on an entirely new level."

The newest edition to their artist roster is the Los Angeles-based illustrator and graphic designer Geoff McFetridge. Best known for his abstract, hand wrought line illustrations that depict everything from land- and cityscapes, fantastical creatures to crowds of people, McFetridge's work has been featured on products from Nike, Pepsi, Stüsy, Burton, Patagonia and in Spike Jonze's Where the Wild Things Are and Adaptation. The collaboration with Heath is McFetridge's first foray into the medium of clay, although not his first work for interiors—he creates graphics for his wallpaper and fabric company Pottok prints. This collaboration marks a first for Heath Ceramics as well, "the first type of collaboration that is very graphical and where the artist is doing the illustration himself." 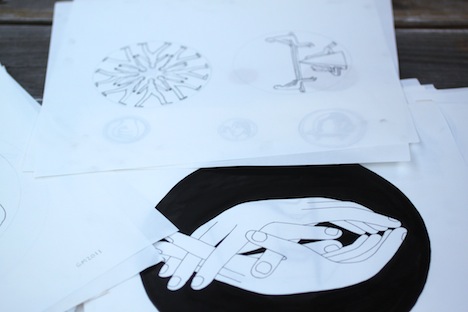 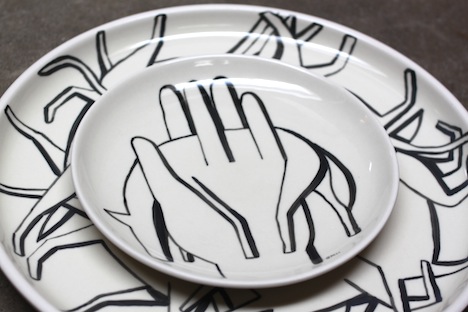 A natural extension of a long friendship between McFetridge and Heath LA Studio Director and potter Adam Silverman, the resulting collection was a true conversation between brand and artist. Bailey shared that the process, "was a deeper level of collaboration... Adam worked with Geoff on the general concepts. We then all worked together to figure out what a good merger would be—how Geoff's work and shapes would translate to clay. We also had to take into account how a piece is made (slip cast or jiggered for example) and whether or not it was appropriate to paint on or carve into the surface and even if we needed to consider throwing a new shape of pot. What was so gratifying about this collaboration was the exploration of technique and process." 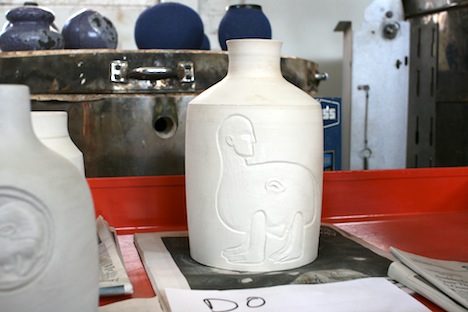 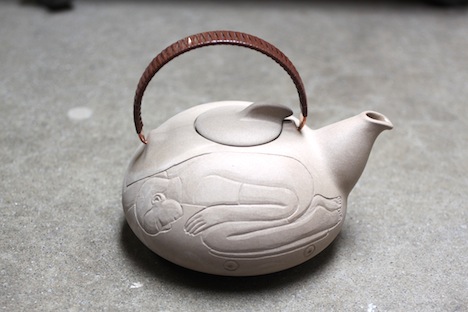 This exploration resulted in a complete custom-painted dinnerware set, hand-carved vases and hand-carved teapot and cup sets for the collection, My Head Disappears When My Hands Are Thinking.

We sat down with Geoff to learn more about his illustrations and carvings for Heath—read on for more info about coin-hunting, yoga-skateboarders in leotards and making art for the masses. If you're in Los Angeles, you can see the pieces for yourself—the show opens tomorrow.

Core77: Can you share a bit about your approach to this collaboration? Why did you choose the specific characters and drawings for Heath?Geoff McFetridge: Everything I do starts as a drawing. I really think things through with drawing. So when I do a project like this that is really based on drawing, you can look at it and really see what I was thinking. I think you can see how the images and themes developed.

The title of the show, [My Head Disappears When My Hands Are Thinking] refers to this. I might have some slight plans when I start working, but really I just start scratching, or painting, and that is where the work comes from. Working in the ways I did also meant that mistakes could not be corrected, or erased. I like working like that. Do or die. 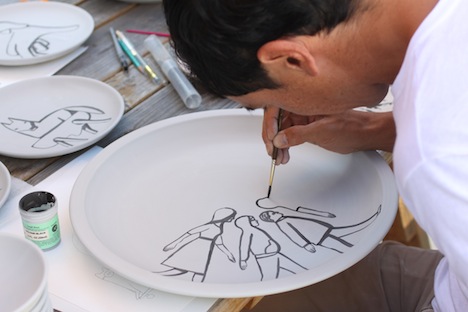 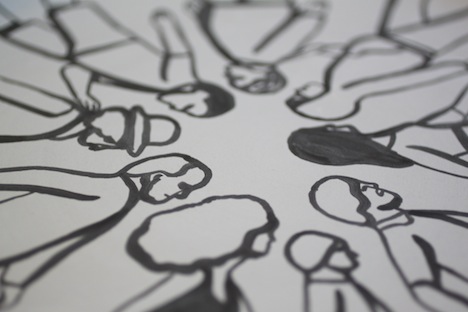 I like to try to create images that seem familiar yet you have never seen it before. I am always trying to invent things that look like I found them somewhere. When I am drawing, or designing something the comparison would be; not making a font, but inventing new letters for the alphabet.

A lot of the imagery also came out of me chancing upon a coin at an art auction. It was a roman coin from, as [the auction] said, "the age of Christ." I liked the description and the coin itself really floored me. It was so beautiful and handmade. It showed a head of an emperor, which sounds very serious, but it was very informal and had tons of character. It spoke to something that I am always seeking out in my own work and helped to fill out an idea of how I could translate my drawings and graphics into something sculptural. The images and things I ended up drawing and carving for the Heath project mix in a little bit of my un-studied impression of what would be on a Roman coin. But it is all just invented and mixed with my own interests. Stuff like yoga-skateboarders in leotards.

This is your first time working with clay! What are some of the more immediate reactions you had to working in the medium as opposed to pen on paper or even sculptural fine art?

Well, all the first stuff I made was gross, in all sorts of different ways. But I am often working in new mediums, so I was expecting this and I knew what I was aiming for. When I work in a new medium, or in a new industry, I always try to get down to the most un-technical basics. For example: in animation, my work is based on "pencil tests," the first step of doing an animation. Something that is usually thrown away.

With the clay, I worked with Adam Silverman to narrow down the variables and the basic techniques just appeared. One technique was painting with underglaze, a very simple technique. The other was based on a tool I had for cutting lino-cuts. The tool is very distinctly shaped, and different from most clay tools. (I didn't have any clay tools, since I don't work in clay.) I was able to use it to translate line drawings into low relief type carvings. It just sort of happened. 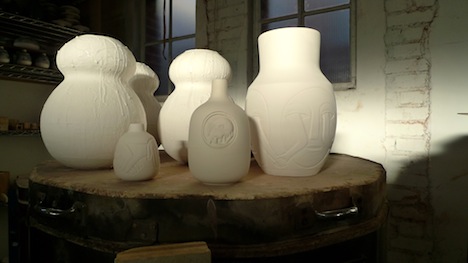 When I started doing it, I immediately knew that it made sense. I also knew that I could incorporate the coin influence and also a type of work that I have always liked—the low relief concrete sculptures that were done by the WPA. There are some that I love and see every summer at the post office in Evanston, Illinois.

In more recent years you have been branching out into more decorative and interior collaborations. What sparked your interest in this outlet for your work?

I started doing fabrics and wallpaper about 10 years ago. At the time, I was interested in how I could make work that was both decorative, yet image-based and also personal. Fabrics and wallpaper that could be "read" like a poster. Yet, since they repeat they sort of negate themselves. A logo chasing its own tail. My first few shows were installations where I would create rooms full of work that was mostly patterned or graphic prints and products made with the same motifs. 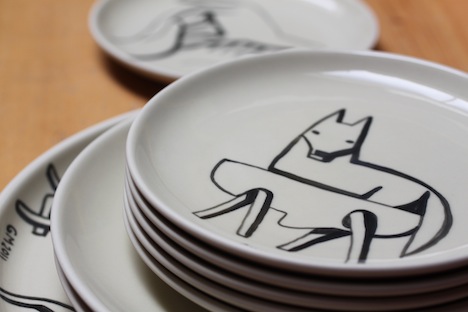 Pottok (my fabric, wallpaper company) came out of these installations. I had many designs in production. It was just a matter of making them available. With Pottok I can take those installations and push them out of the gallery into the real world.

I could sell prints or drawings. And I do. But I have always put a lot of energy into doing everything else. Releasing my work on fabric or as a tote bag has always appealed to me. It is a challenge, I want people to value the work I do, but I want that value to come out of something they connect with in the work, something they bring to it. It is nice to work out ways to make and sell art outside of the gallery context too. That has always been a big part of why I work the way I do.

Generally; I make stuff for people, I think I became a designer for this reason. So I like to have stuff out there. My work exists, because it is public. I am a performer to some degree—the way I change and develop my work is a bit of an ongoing show.