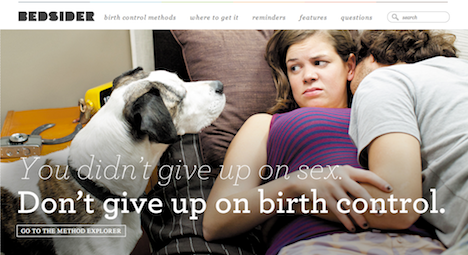 The line between advertising and design agencies has been a blurry one for some time, but it seems to be getting even more malleable now that design is reliant on interfaces and user experience. Advertising seems to find us wherever it can and increasingly on our phones and computers. IDEO recently dove right in to the ad game, working with the National Campaign to Prevent Teen and Unwanted Pregnancy to create Bedsider.org, a service design solution for birth control awareness. 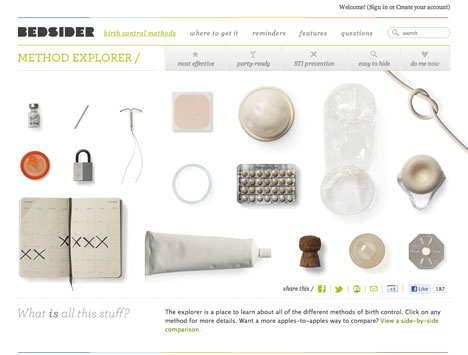 Bedsider.org won our Core77 Design Award for Strategy and Research, mostly because it's a smart and thorough, multi-faceted approach to behavior design, especially in a complex arena. The National Campaign states that 7 in 10 pregnancies among unmarried 18-29 year-olds are unplanned, and their mission is to change this and educate. IDEO identified the main obstacles to this goal as mis-information (or lack thereof), inconvenience with methods, and materials that don't speak to the target demographic.

Central to the website (and the project) is tone. IDEO and the National Campaign recognize that they can't embrace all points of view on young women having sex (their target demographic is 18-29-year-olds), and make no attempts at trying to prevent sex. Rather, Bedsider smartly accepts that sex is going to happen—afterall, the National Campaign is trying to prevent unplanned pregnancy, not sex. So, directed primarily at women, the site adopts a conversational, tell-it-like-it-is tone of a non-judgmental best friend. Several voices add to this tone—the people talking in "Real Stories," and the engaging female doctor who wraps up the "Fact or Fiction" bits with the medical response about the myths gathered through research. Overall, it speaks to the demographic in their language—straightforward and funny, but helpful. 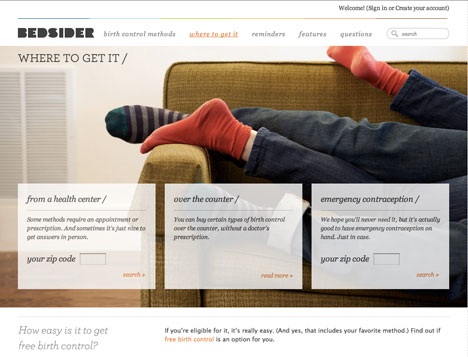 To address the inconvenience issue with birth control, the Bedsider campaign also includes a sign-up for SMS reminders. Consistent with the site, messages are light and fun, reminding women to take their pill or get a check-up, while offering delightful, somewhat-related tidbits ("5 years ago today Justin Timberlake's SexyBack was the #1 song in the US. Look who's bringing sexyback now: it's all you. Better take that pill."). The SMS element is an interesting one in terms of behavior design—IDEO recognizes that it's the most relevant platform for their users. Most importantly though, this component addresses that sex, and remembering to take birth control, is unplanned and not restricted to time and place. Women are not reaching into their bag for a brochure they got at the doctors office at these times. They do, however, likely have their phones with them (at least before and after).

IDEO outlined the creation of the SMS reminders: Through prototyping, co-creation and user testing, we found a few things were key to the reminders' success: - We let women choose when the reminder would arrive. (ie: 7 am, 12 pm) - We wrote the reminders in an approachable, engaging tone. - We change the content of the reminder every day—which gives people a reason to bother opening it in the first place. - We made the reminders about something people care about (better sex, happier lives) instead of something they don't (birth control, medicine)

The most interesting reminders are often forwarded between friends, which added an unexpected, but awesome, viral component.

The national launch of Bedsider last week follows a successful pilot program with 750 women in Florida. Along with its launch, the National Campaign also released a huge public services campaign in a partnership with the Ad Council with more than 33,000 media outlets and PSA's consistent with the witty voice established on Bedsider.