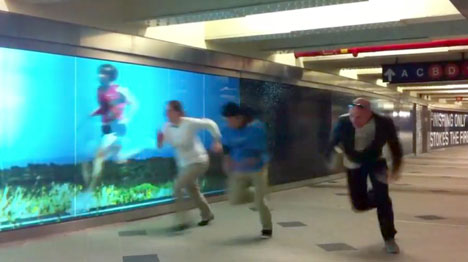 Hard proof that we are living in the future: To promote the recent New York City marathon, Asics hooked up a 60-foot video wall in Manhattan's Columbus Circle subway station, inviting commuters to race against life-sized footage of Olympic marathon runner Ryan Hall. Hall zips by at his average pace while you see if you can match it.

I know the technology doesn't seem that advanced, so why do I deem this futuristic? Because in the New York of my youth, when two people were running in the subway, both were real and the guy in front usually had the second guy's wallet.