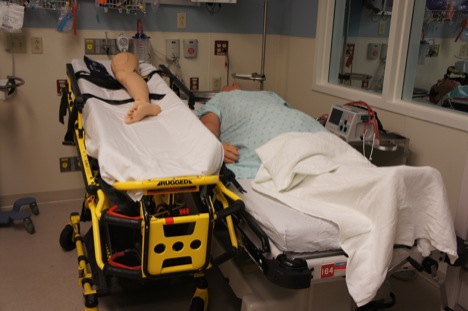 We were lucky to get a tour of the Patient Safety Training Center in the basement of the Dartmouth-Hitchcock Medical Center (DHMC) in Lebanon, NH. Although the name sounds rather banal, the Center actually operates like a "hospital within a hospital" used for medical simulations. The purpose of the facility is to train any hospital employee who might come in contact with a patient during their stay, whether it's a doctor, a security guard or even a janitor. 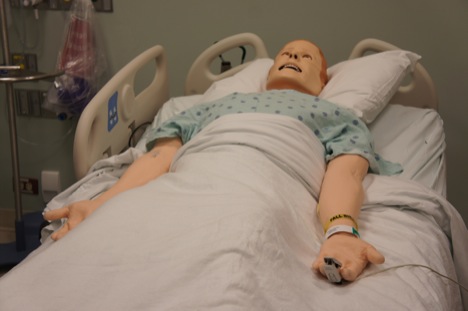 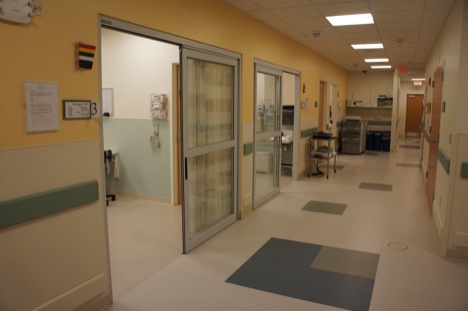 Since opening three years ago, the Center has seen between 5,000 to 10,000 educators and trainees pass through each year. The main hallway is lined with a nurses' station and an assortment of rooms, including an ICU, clinic rooms, a neo-natal room and an Emergency Department which can be reconfigured into an operating room. Likewise, each of the various rooms takes on a variety of roles depending on the simulation's needs, akin to a television set. A room used for clinic rotations for Dartmouth Medical School students in the morning might be transformed into, say, a living room for training nurses in home care in the afternoon. 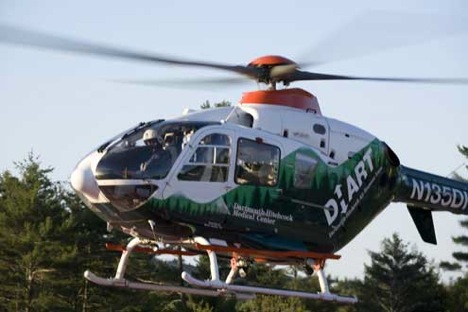 The Patient Safety Training Center has also taken their simulations outside the fake hospital hallway. For the Dartmouth-Hitchcock Advanced Response Team (DHART), the hospital's medical transport helicopter crew, the Center put together a simulation of more theatrical proportions. In order to recreate a fire in the patient compartment of the DHART helicopter, the Center's staff put a helicopter on a moving lift inside the DHART hanger and added in dry ice, recorded sounds, and a strobe light to simulate the spinning rotors. While helicopter fire training sessions may be few and far between, the staff at the Patient Safety Training Center "like to think we can do anything down here." 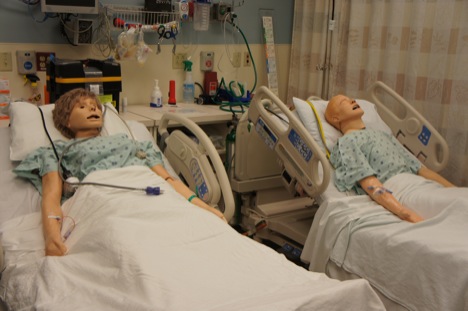 The main stars of the fake hospital, however, are the standardized patients (SPs) and the extremely life-like mannequins. The concept of using SPs, or actors who pretend to be patients, to train doctors has been around for half a century. Although SPs are real human beings, there are only so many "real" symptoms they can reproduce without having to hand the trainee a 3×5 notecard with a situation printed on it.

In contrast, advanced mannequins can reproduce heart, lung, and bowel sounds; can be injected with IV fluids; can be shocked with an AED; can have their throats intubated; and can have collapsed lungs reinflated with a chest tube. In short, mannequins can approach the brink of death before being brought back to perfect health over and over and over again. The staff, in a sense, are like the Mythbusters, repeatedly abusing their trusty dummies for the sake of education and the perfection of science.

Adult mannequins can cost between $30,000 to $70,000, while the more advanced models, like the Human Patient Simulator (HPS), can cost $200,000. The HPS from Medical Education Technologies, Inc. (METI) was originally designed for military use and includes an internal physiologically-based computer program to determine how the mannequin acts from different and real inputs. 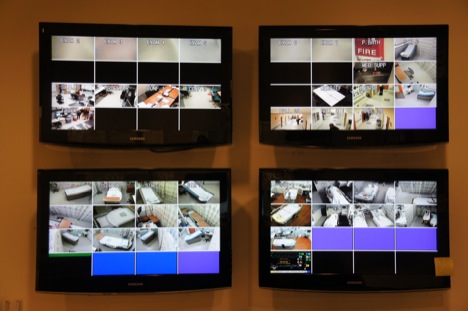 Multiple cameras are mounted inside the simulation rooms, allowing trainees to review their training later on and for educators to watch from multiple angles

Luckily, "what happens down here stays down here," says Manager Tony Kidder. "This is a safe place to practice and to make mistakes." When the Patient Safety Training Center first opened, doctors were afraid they would lose their licenses if they screwed up a procedure during a simulation. Kidder and his team have worked hard to make it clear that the Center is not a place to be formally evaluated. Accordingly, rates of infection from medical procedures have dropped significantly at the DHMC and trainees are coming back for more practice. "We put you in situations we hope you never face," says Kidder. "But if you do, at least you faced it down here."