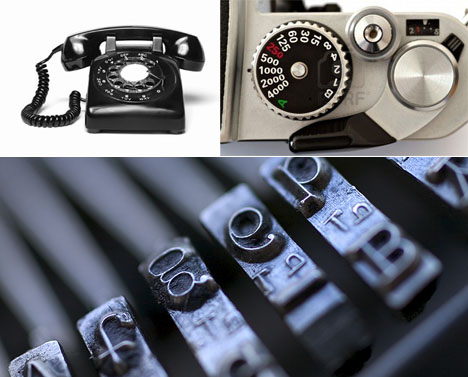 When my iPhone rings, it sounds like the original Ma-Bell-style vibrating metal bell. When I tap out a text message, if you listen closely you'll hear pre-programmed typewriter strikes. And when I take a photo with it, it goes "chk-KSH." The only thing that's missing is the crackly sound of a needle being placed on a record playing at the beginning of an MP3.

A certain generation among us has been bred on a set of sounds that are forever etched into our memory, primarily mechanical sounds created by various pieces of hard material striking, rubbing or otherwise acting against each other. But now that most of those mechanical pieces have been replaced by circuits and wires, product designers still like wiring those sounds into our devices because they presumably create some kind of cognitive harmony.

Kottke's turned us on to two collections of sounds that are largely extinct. The first is Mental Floss' "11 Sounds that Your Kids Have Probably Never Heard," featuring things like the plastic dial from a rotary phone, a cash register and an old Smith-Corona. The second is "Sounds of the Office" (a real office circa 1964, not the Jim & Pam one) from the Smithsonian's Folkways Recordings collection and has fossils like calculators, coffee percolators and even an old-school vending machine (the kind with the on-board bottle opener).

To these I must add my own, the soothing (to me) sound of a vintage Singer sewing machine:

By the way if there are any Tweens reading this, I just thought of something you can try: Set up your voicemail so that it immediately switches to a recording of something called a "busy signal." (Google it.) Your friends won't know what the hell it is.