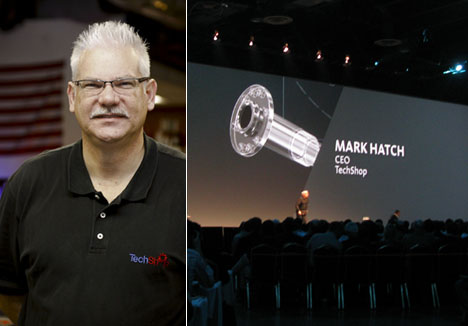 Here at Autodesk University 2011, the second Keynote speaker we were excited to hear from was Mark Hatch, CEO and founder of open-access workshop TechShop. Hatch's talk was perfectly complementary to McGrew's—while McGrew told the story of how he was able to make his dreams come true, the aptly-named Hatch talks about how TechShop's incubator-like facility enables others' dreams to come true. And he's not afraid to throw dollar amounts around to make his points, underscoring the fact that DIY is not some goofy, geeky hobby, but a potentially powerful source of job creation and wealth, not to mention creative fulfillment.

Again, I apologize for not being able to provide the slides attending his talk—he showed a bunch of objects that came out of TechShop's facilities—but still think you'll find Hatch's explanations compelling.

Hi, I'm Mark Hatch, CEO of TechShop. For those of you who aren't familiar with TechShop, it's 17,000 square feet of every machine tool, woodworking tool, plaster tool, electronics tool, computer tool, automobile bay, waterjet, plasma cutter, textiles tool—literally every tool you need to make almost anything on the planet. We're a membership-based do-it-yourself manufacturing and fabrication machine shop. One hundred dollars a month gives you access to the tools of the Industrial Revolution for the first time in 250 years. For the cost of a bad Starbucks addiction, you can change the world.

So why is this important? It turns out in the United States, there are 40 million creatives. So what this means is that the largest untapped resource on the planet is not natural gas, is not oil, is not energy; it's the free time, disposable income, and creativity of the creative class. There are 40 million of them in the United States. They control 470 billion dollars of disposable income. They have billions of hours to spend every year watching television. If we could get just a small portion of them to focus on being creative, they could literally change the world. It's an interesting hypothesis, but I'll show you that it's actually true.

Why is it happening, and why is it happening now? These are the cheapest, easiest, most powerful tools in all of human history. We are routinely taking people off the street, reasonably bright folks, giving them two or three classes and they are launching products in weeks. We've never lived in a state where you could do that. These are the cheapest, easiest, most powerful tools--here are some of the things that people are making. This is the world's fastest electric motorcycle. All of the components were built in Menlo Park, anything that you couldn't get off-the-shelf they were able to construct themselves.

This is a jet pack. Andy Philo says that General Motors and Boeing isn't working on a jetpack—so he is. That pilot broke one leg and two ribs learning how to fly. And frankly, as a former Green Beret, I don't think that's too bad a price to learn how to fly.

This is a desktop diamond manufacturing device--you'll have to get me later to explain exactly what's going on with that one--and this is Patrick Buckley's [DODOcase iPad case], many of you may actually have this. Patrick came in, took three classes, and 90 days later, had hit one million dollars in sales. He went from learning the tools to a million-dollar company in 90 days. Now I know that when I was at a Fortune 500 company, sometimes it would take me that long to get approval for the focus group!

People are actually changing the world because they have access to these tools. This is Square, a transaction-processing [device], Jack Dorsey's part of it, James McKelby did all of the original prototypes in TechShop in Menlo Park, completely changed merchant banking, they've been in existence about two years and they just got a one billion dollar valuation.

This is Phil, he built the world's cheapest solution for cooling data centers, he beat IBM and Emerson in a head-to-head competition at which point Emerson immediately licensed the technology.

This is Nick, his team has built a device that detects nitrogen in the ground before you fertilize it. It will reduce the size of the run-off zone in the Mississippi. This is the world's cheapest drip-irrigation system.

This one's my favorite. This is a phase-changing polymer blanket that a group of kids out of Stanford came up with. They came in to use the community--their core IP was upgraded because they came to our community--it is on track to save 100,000 children's lives in the next five years.

So what does this mean? This means that open innovation just went nuclear. For the cost of a Starbucks addiction your collaborators in four locations today, five soon, hopefully 10, 20, 30 more around the globe over the coming years, they can now collaborate with you directly with the tools that have been buried in research & development labs, buried in large firms, buried in educational institutions--literally for the first time in all of human history. So my question to you is, what are you going to do about it? What process are you going to put in place that's going to leverage this new capability?

Sixty percent of the innovations in a particular year that Eric von Heppel identified, the original idea came from the consumer.

Open innovation is a wonderful thing. TechShop is helping you get there.