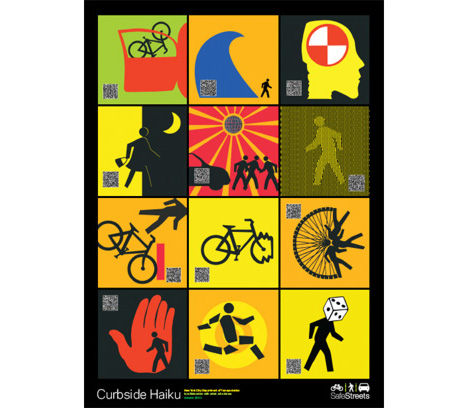 In a rather unorthodox move, the New York City Department of Transportation has installed a handful of signage from left field. DOT Commissioner Janette Sadik-Khan and co. enlisted artist John Morse to design twelve graphics, each complemented by an obliquely explanatory haiku, in the interest of raising awareness for cyclists and pedestrians."Curbside Haiku," a DOT safety education campaign launched in November 2011, is a set of twelve bright, eye-catching designs by artist John Morse that mimic the style of traditional street safety signs. Each sign is accompanied by a haiku poem. The "Curbside Haiku" installation can be seen citywide on 144 signs to promote road safety. Each design and haiku delivers a safety message by focusing on a transportation mode.

Placed near eye level in high-crash locations near cultural institutions and schools, the colorful signs draw attention to the critical importance of shared responsibility among pedestrians, bicyclists and motorists in keeping New York City's streets safe. 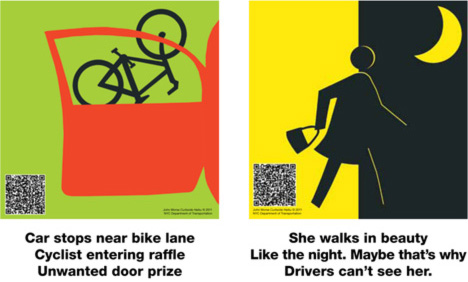 As bad as traffic can be in the city, the hint of irony—despite the refreshingly unironic form and presentation of the signs—lies in the fact that the signs will likely go largely unnoticed by motorists. Of course, if the QR codes are any indication, that's not necessarily who they're intended for:In many locations, the haikus are embedded in a QR code on the sign, readable with smartphone apps, making the safety messages interactive and fun to discover. In others, the signs are hung in pairs with the image and text from its accompanying haiku. 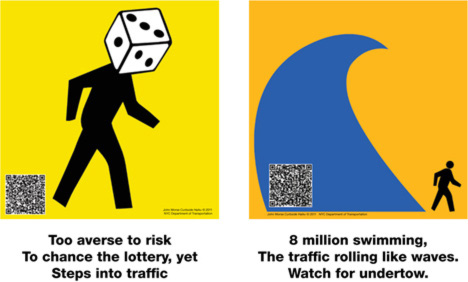 And although the new signs certainly stand out among the visual onslaught of many intersections throughout the city, I'm surprised that none of the signs are located in Lower Manhattan (at least according to the DOT's Curbside Haiku map (PDF)), which I generally find to be more cycle-crossed than northward neighborhoods such as Spanish Harlem. 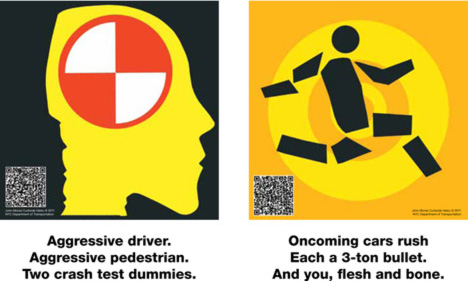 That said, each piece is undeniably delightful—if only marginally informative—and I, for one, appreciate the effort. While some might decry this latest effort by Safe Streets—"a public-private partnership which aims to reduce the number of traffic-related injuries and fatalities [through] social marketing and direct education programs"—as a vanity project, keep in mind that the New York City DOT is preparing to launch a 10,000-strong public bicycle program by Summer 2012. There are probably worse ways to spend funds from "local traffic offense fines" (read: tickets) and for what it's worth, Safe Streets is selling posters of the graphics to raise money for other awareness initiatives. 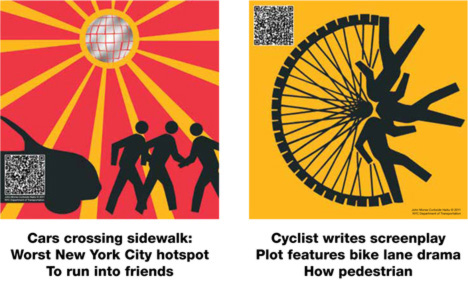 Thus, the new signs are somewhere between traffic infrastructure and public art: they're veritable stop-and-ponder signs. And, lest we forget due diligence in post-poetic reverie:

...along with an impressive series of user-submitted sign suggestions in the comments. (Too bad "meta-metacommentary" is eight syllables long.) 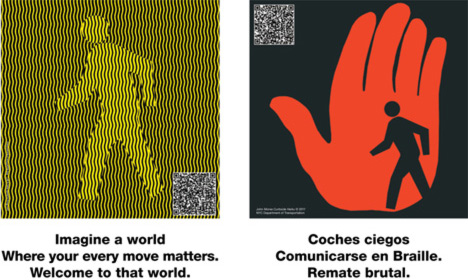 Nevertheless, another kind of 'signage' will probably be more effective for cyclists in the long run. 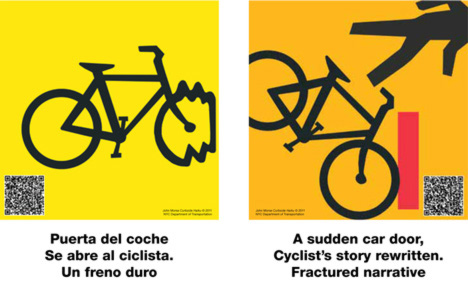