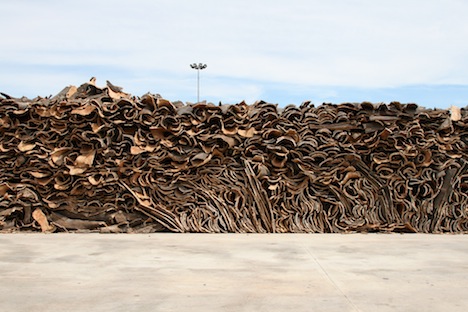 This is the third and final piece in a series exploring cork from designer and educator Daniel Michalik. As a prelude to this series, Michalik produced a beautiful photo gallery documenting the cork harvest.

I am sometimes asked about a rumored "cork shortage" which has fueled the popularity of synthetic bottle closures such as plastic stoppers and screw caps. There is a 20-acre paved lot in the Portuguese city of Coruche, 100 km NE of Lisbon that answers the question in a rather awe-inspiring way.

Standing along the elevated perimeter of the site, one looks across a vast landscape of cork bark, piled high in mountain after mountain. Some of the hills glow with the intense orange of freshly harvested bark. Others have been sitting outside, uncovered for a year, their color turned a slate gray.

It is in this lot that a portion of the yearly cork harvest awaits the sorting, boiling and trimming necessary for it to be made into billions of stoppers for wine bottles. The facility is one of several in the area belonging to Amorim & Irmaos, the world's largest producer of cork stoppers and related products. 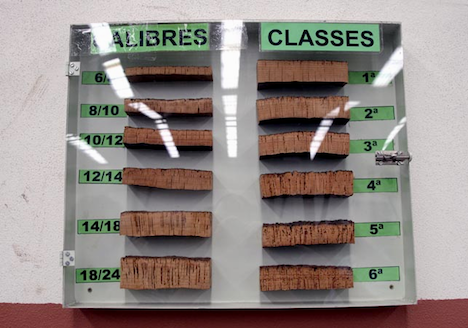 As the leading manufacturer of cork products, Amorim's industrial facilities exemplify the many layers of re-use and value-adding that typifies the industry. Touring their factories throughout Portugal I found an industrial system comprised of closed, interlocking loops, where a sustainably sourced raw material becomes a product (wine stoppers) then is repeatedly transformed into new objects of value. Moreover, what remains after these loops have run their course is still not considered waste, but biomass: a source of energy to power the factories that keep the loops in motion.

Prior to the mid-1990's the natural cork industry controlled 95% of market share for wine bottle closures. With the advent of synthetic closures the market dominance was cut by nearly one third in less than a decade. This trend is rapidly turning around however. In 2010 preference for French wine producers was 87% for natural cork closures and in Italy it was 90%. Bottle closures are still by far the most profitable use for the cork. However, the market shake-up has led to significant investment in alternative uses for cork and in the environmental optimization of the industry. 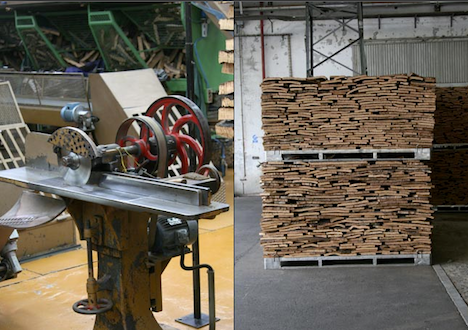 Broadly, the cork industry is predicated on the concept of repeated value-addition into what would otherwise be waste. There are numerous profitable applications for the material after stoppers are made, such as flooring, wall covering, insulation and home accessories. This diversity of application has led to factories that are built around using material as efficiently as possible.

Most wine corks are made by hand. Sections of bark roughly 5x5x40 cm are conveyed to a technician that operates a power-assisted punch, punching out stoppers one at a time. The process is rhythmic and highly skilled. Speed is key, but equally so is accuracy and material quality. Watching the cork-maker is like watching a percussionist, simultaneously operating the punch with his foot while moving the material along with his hands and using his eyes to find the best sections of material. While robotic sorting machines and stopper punches are humming away nearby to produce lower-quality corks (and higher reject ratios), it is still profitable to engage trained eyes and hands to read the bark and choose where to strike. 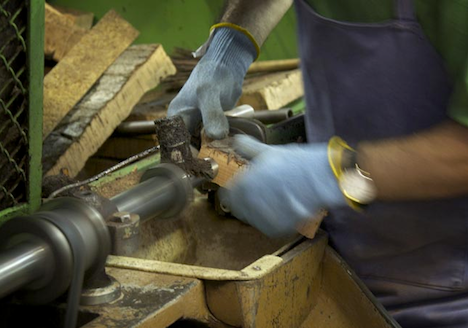 VIDEO 1: Hand-punching bottle stoppers from bark. The physical process involves a foot operation of a power-assisted punch, along with quick and skilled hand-eye coordination to select which sections of bark will produce the best quality and yield. Depending on quality, a stopper ranges in price from a few cents to a few euros per piece, so it pays to have a skilled puncher. VIDEO 2: A robot feeding sections of bark to the robotic punch. VIDEO 3: A robotic stopper punch. This machine does not read or select for quality. Therefore the level of "waste" is quite high, as a high percentage of the stoppers produced will have air cavities. These are sent directly for grinding and re-use. 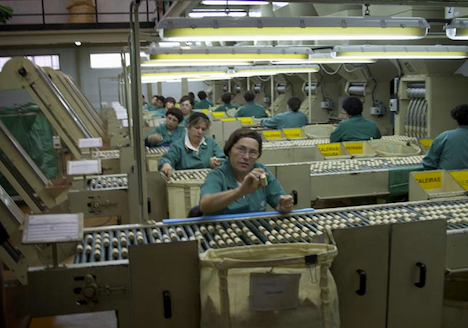 After the stoppers are made, the remaining material fans out across a diverse spectrum of factories that grind the byproduct into precisely calibrated granulate. Much of the granulate is then cast, either through compression, expansion or extrusion back into solid forms. The raw material is thus reborn and sent to factories to become the products mentioned above. In these factories waste is seen as opportunity. Collection systems suck up leftovers of all shapes and size, which are then reground, remolded and used again. 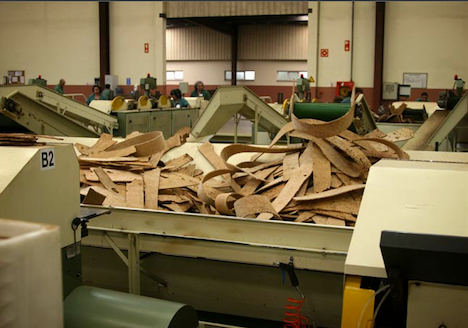 A small ratio of binder (on average 3% of binder by volume) is needed to mold cork using compressive forces. Amorim has recently developed a binder that is free of urethanes and formaldehyde, which were the binders of choice until recently. To make the blocks from which other products can be made, a rectangular mold is filled with the granulate/binder mixture, and the volume is compressed roughly 60%. Held in compression, the molds are then sent to a kiln to allow the form to cure. 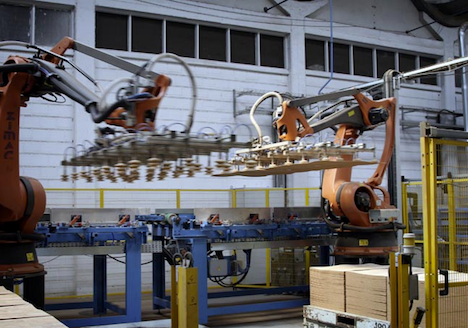 While this method is efficient, there is a factory in Southern Portugal that uses a fascinating process of heated, pressurized expansion to produce insulation blocks that are free of binders altogether. At Amorim Isolamentos, granulated cork of lower grade is sent into steel autoclaves, which are sealed and injected with steam to heat the cork to roughly 300 degrees C. The granulate then explodes like popcorn, quadrupling in volume and pressing against the sides of the chamber. The intense heat liquefies the natural suberin resin in the cork to act as a binder. When the autoclave opens, a steaming, red-hot block of blackened cork rises up onto a trolley, where it is injected with cooled water vapor to stabilize the block and prevent deformation from residual heat. 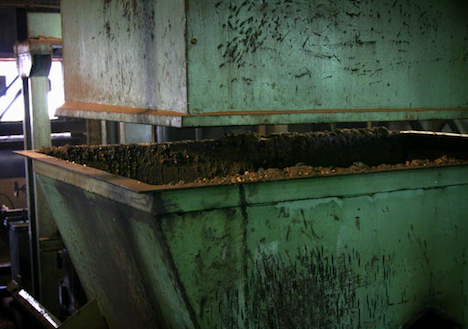 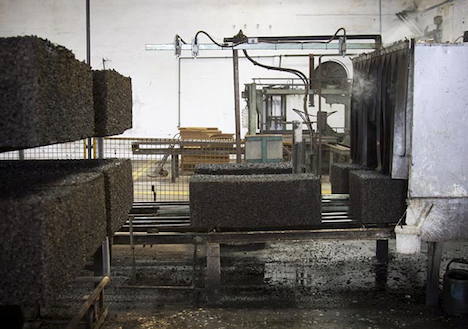 When cork granulate can no longer be used for profitable application (usually because it is too fine and has become dust), it becomes biomass. Each of the Amorim factories has a furnace to burn the cork dust at over 900 degrees C, providing on average 63% percent of the power needed to run the factories. Because it comes from trees that have absorbed millions of tons of CO2, the smoke from the furnaces (unlike the burning of fossil fuels) adds no new carbon to the atmosphere. 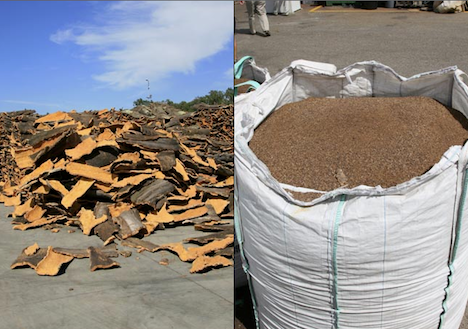 Above: The beginning and the end of the cork process. On left, raw bark from the forest, awaiting the first processing stages. On right, bag of cork dust and particles. This material is used as fuel to power the machines in the factories making products from cork, post stopper production. As opposed to the burnign of coal and petroleum, biomass fuel has a net zero carbon release (since the trees absorb carbon). Between these two photos, countless cycles of material release occur, creating a closed-loop, virtually waste-free industry. On average, Amorim factories are 63% biomass-powered. Below: Dark cork dust bound for the furnace. The dark cork factory in Vendas Novas is 90% powered by biomass. 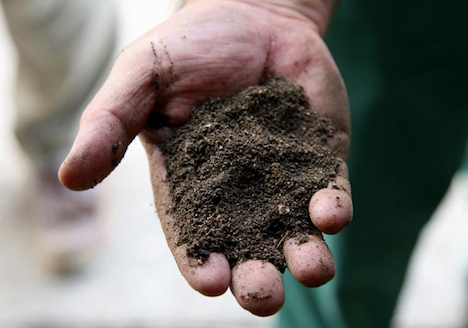 While concepts of material efficiency and waste upcycling are not new, the industry and agriculture of cork has achieved a special level of integration, from forests that provide raw material while absorbing carbon and protecting habitats to manufacturing systems that absorb and reuse virtually all waste. While one could this industry as a fascinating curiosity, one would be wise to identify the points within it that can be transferred across materials and applications. How can we engage an industry like that of cork farming and production as a model by which we can improve other forms of material process?

For more from the Lifecycle of Cork series:
» Cork: Letting the Material Lead
» Men in Trees: A Look at the Annual Portugese Cork Harvest
» PHOTO GALLERY: How Cork is Made