Seasonal Affective Disorder (SAD) is an affliction characterized by perennial depression, typically during the winter in the Northern Hemisphere, when daylight is limited. (The Wikipedia article is particularly illuminating, so to speak: "Although experts were initially skeptical, this condition is now recognized as a common disorder, with its prevalence in the U.S. ranging from 1.4 percent in Florida to 9.7 percent in New Hampshire.")

Enter SEQINETIC, the first Kickstarter project by a Copenhagen-based trio of mechanical engineers who have worked on everything from medical devices to airplane components:Getting out of bed on a dark winter morning can be tough. Lots of people need a strong cup of coffee or even an energy drink to get going.

We have an innovative alternative. SEQINETIC "sun" glasses are a calorie-free, substance-free way to beat the winter blues. They offer the bright, white daylight you're craving—in a portable design. 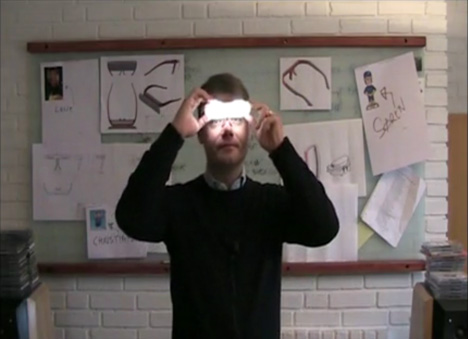 The product is essentially a light therapy lamp turned into a pair of speculative spectacles that are designed to deflect artificial sunlight towards the wearer's eyes. "SEQINETIC glasses feature 6 powerful LEDs and a reflector. The reflector bounces soft white 'daylight' around your eyes but not directly into them, improving your mood."

The simple ABS plastic frame features a neoprene nose support for comfort and LEDs that are a "special high-quality type from Japan," which put the Kickstarter price at $55 (over 30% off the projected retail price of $80).

As for the name:SEQINETIC has nothing to do with sequins, glitter or glitz. The name derives from 'Seqineq' which means Sun in Greenlandic, and from the Greek work 'Kinetic' which means to be in motion. However, if you feel like Lady Gaga while wearing SEQINETIC, that's just a sign that you're really lightening your mood.

I'm curious about the visual effect of the light... as well as the physical effect of wearing a pair glass that are weighed down with a pair of AAA batteries. Either way, it seems that they're not intended for extended use.