As the evening approaches Tokyo, the air has a hint of winter chill to it. It's during this seasonal transition from fall to winter that the Tokyo "Design Week" has firmly established itself. Designtide Tokyo is one of the 3 major events that make up the week, along with Tokyo Designers Week and Design Touch. Designtide's main event was held again this year at the Tokyo Midtown, with roughly 27,000 attendees (including me).

This year's Designtide event had a noticeable new flavor to it. What I immediately noticed about the exhibitor lineup this year was that the designers that used to be known as the young-guns had been replaced by a new batch of even younger designers. This new group, born in the post-1980 era, attracted a lot of attention with their exhibitions. In a country with such a large elderly population, it felt good to see new talent in the Japanese design industry as this young group shows their work to the world at large.

With those thoughts in mind, I made my way around the event asking industry insiders what caught their eye this year. 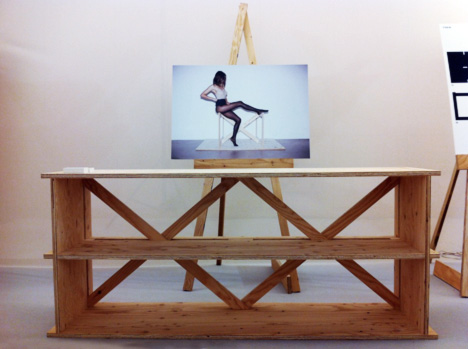 I happened upon Mike Abelson, designer at POSTALCO, whose favorite pick was Colin Schaelli's con.temporary furniture. Here's what Abelson had to say:I like the way that the whole thing can be put together in less than a minute and still be very stable. It is also nice not to have to use any fastening hardware or glue! It looks simple to manufacture but I have a feeling that it requires skilled craftsmen to make it—I am guessing that that is why it is made in Japan. 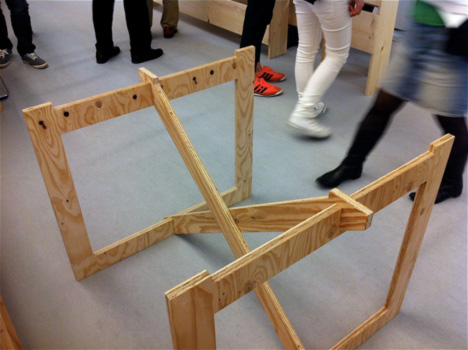 con.temporary furniture doesn't use any screws or nails and can be easily put together or taken apart.

The con.temporary furniture series doesn't use any screws or nails, and is easy to put together or take apart. Schaelli believes in using locally sourced materials, so all materials used for the furniture series are sourced from the location where the item is sold. He also has the furniture manufactured in the market in which it's sold. Currently, his furniture is available in Japan and Switzerland, but Schaelli is looking to increase his reach soon. 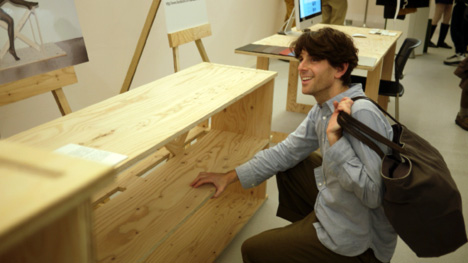 POSTALCO, where Abelson designs, is a popular brand in Japan that specializes in leather goods, accessories, as well as stationary. All of POSTALCO's products are born out of observing people's daily lives, and are the type of high quality products that are loved by their owners. One of the more popular items at the shop is Abelson's "bridge bag," which utilizes the same structure as suspension bridge to achieve a lightweight bag that can hold heavy objects. Abelson had previously designed for Jack Spade. 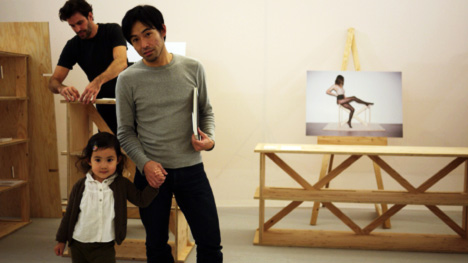 Sosuke Nakabo, the designer behind the main exhibition space at Designtide, and his 3 year old daughter standing next to Schaelli's con.temporary furniture.

Sosuke Nakabo, the designer behind Designtide's main exhibition space, also chose con.temporary furniture as his favorite pick. Here's what Nakabo had to say:con.temporary furniture doesn't necessarily have an immediate impact, but I felt like the workmanship is honest. Designtide Tokyo obviously attracts a large number of Japanese exhibitors. The good is that it's a friendly and intimate community. The bad is that it can be too comfortable and placid. In that kind of environment, Colin's shelf definitely stands out as different. It has that European perspective and history ingrained in it. 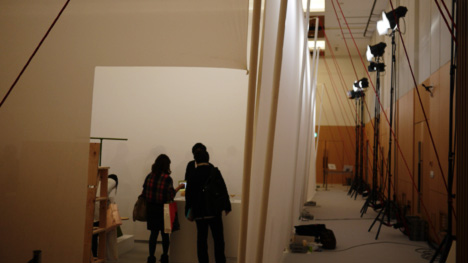 The Designtide exhibition hall is designed by a different designer each year. The big difference this year was that for the first time, the designer was a product designer instead of an architect. Nakabo, who previously worked at Jasper Morrison's London offices before striking out on his own, was selected to design the space from a large pool of candidates. Keeping in mind that the whole exhibition area is going to be used to showcase new design pieces, Nakabo chose to wrap the area in a white cloth, and apply lighting from the outside. The effect is much like a photo studio, giving each piece a pleasant lighting to maximize fascination. 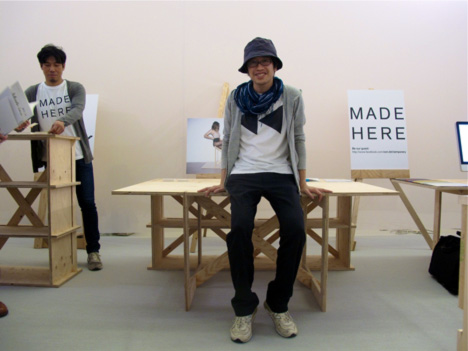 Another vote for con.temporary furniture came from Hidetoshi Kuranai, who's a copywriter at the major Japanese advertising firm, Dentsu. Kuranari is involved in design research for Dentsu, going around the world visiting different design firms and offices, analyzing the source of creativity, and understanding how creativity can be spread and utilized around the world. According to Kurnari:con.temporary furniture doesn't use any small parts, but everything fits perfectly—and it can be assembled in 20 seconds. Colin had done work for the recycled bag maker Freitag, one of which won a grand prize at the Design Pries Schweiz. His designs are always very easy to produce and assemble, which makes me think he really has a talent for figuring out how to construct things efficiently. 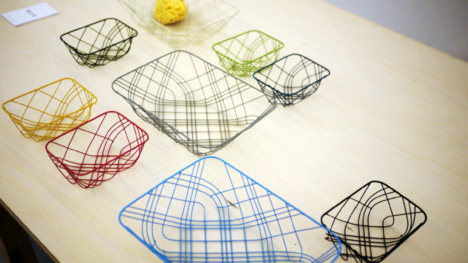 Kuranari made another favorite pick, tartan, from the young design group mute. Kuranari noted that, "I feel like the designers at mute put a lot of thought in to each work they produce. They really focus on applying their own unique skills and style to each piece of work." 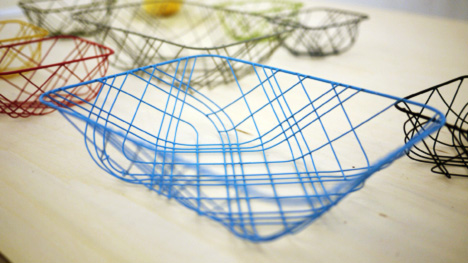 Tartan is a basket made of wire that they've woven in to a tartan (or plaid) pattern. The idea behind these tartan baskets is that you can take an object that can be found anywhere (i.e. a small basket), put it through a design process, and come out with something new that can't be found anywhere else. Everything on display was hand-made by the designers at mute. Even the color arrangements were thought out to create a nice arrangement when the baskets are stacked together. 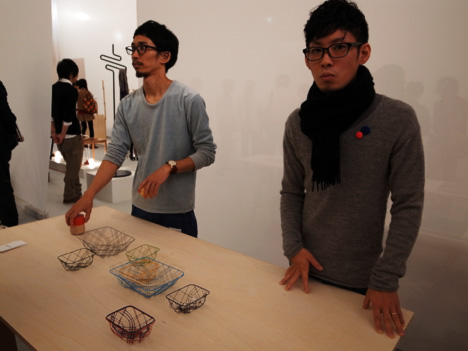 Kenji Ito and Takahiro Umino of the design group mute

Design journalist Chiharu Watabe also chose mute's "Tartan" as her favorite pick. Here's what Watabe had to say: "Mute is made up of a pair that can do graphic design and product design. When they make things, the color expressed in their work is akin to what you would expect with photography, which is what I like." 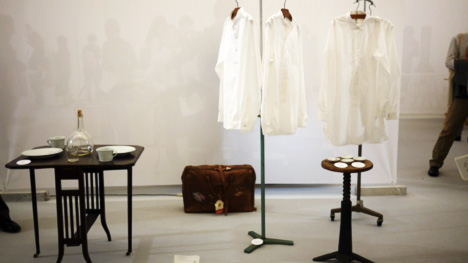 Tomas Alonso, who's a product designer based out of Italy and Spain, picked Yota Kakuda's booth. "I like the nostalgic feeling of these ceramic buttons" commented Alonso. 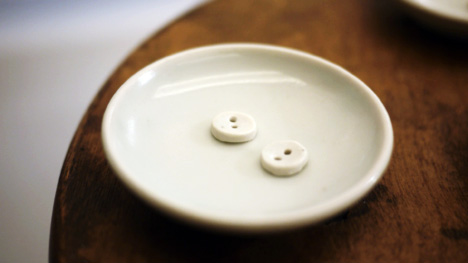 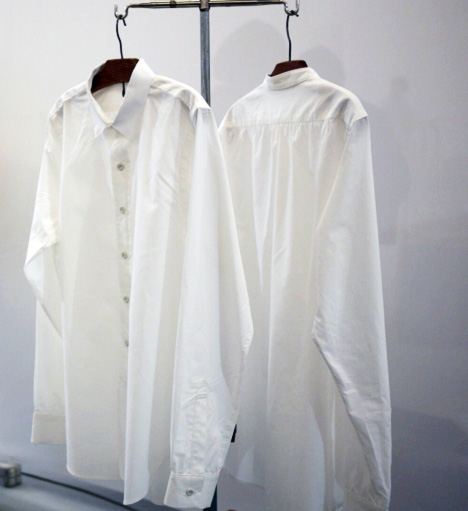 Instead of exhibiting a new product he designed, Kakuda opted to curate a display featuring items that he likes himself—items that "aren't anything particularly special, but definitely cut up the rhythm of daily life in their own subtle way." The items on exhibit were picked in conjunction with the fashion designer Yuichi Kobayashi, pottery artist Motoji Igarashi and glass artist Masahiro Ishikawa. Kakuda previously worked as a for Ross Lovegrove and as a product designer for Muji before striking out on his own. 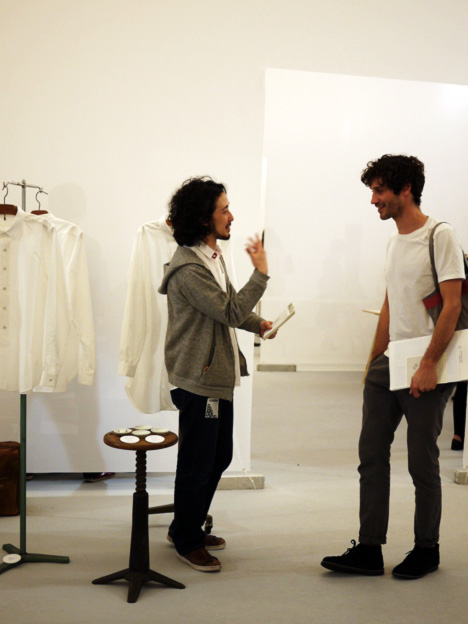 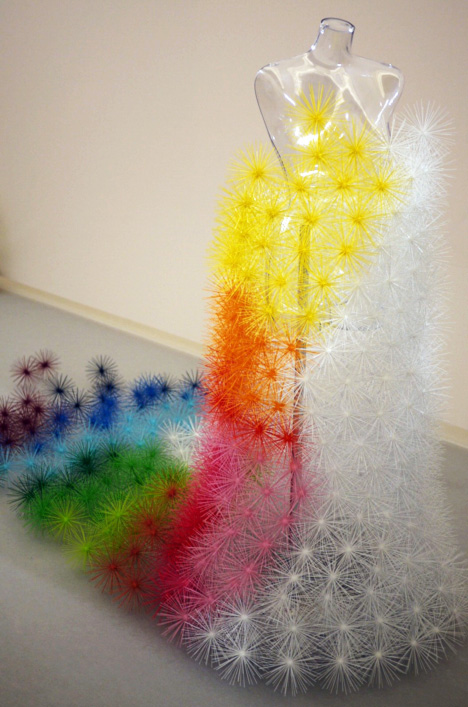 Nikkei Design Magazine's Editor-in-Chief, Kazuya Shimokawa made the final pick. Emmanuelle Moureaux's Toge (meaning "thorn" in Japanese)—which was also spotted by our contributor Michael Connolly—is a wedding dress created by piano strings in round modules. There are 500 of these modules used to put everything together. While the thorns look hard and sharp, the concept itself has quite a soft and pleasant feeling. Moureaux is known for her colorful style (15 different colors). Here's what Shimokawa had to say:

Emmanuelle Moureaux is a veteran architect and designer who's done great work with store designs as well as products. For such a veteran to exhibit at the very young-oriented Designtide, moreover, with a piece that's bordering on art as opposed to her usual area of work is very surprising. I highly respect the spirit of challenge that she posses. 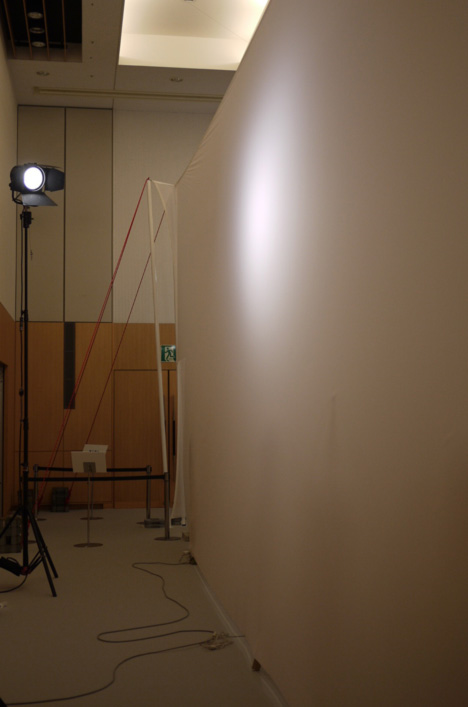