The Story of the Modern Desk Lamp, Part 2: Piggybacking Across the North Sea with Sewing Machines 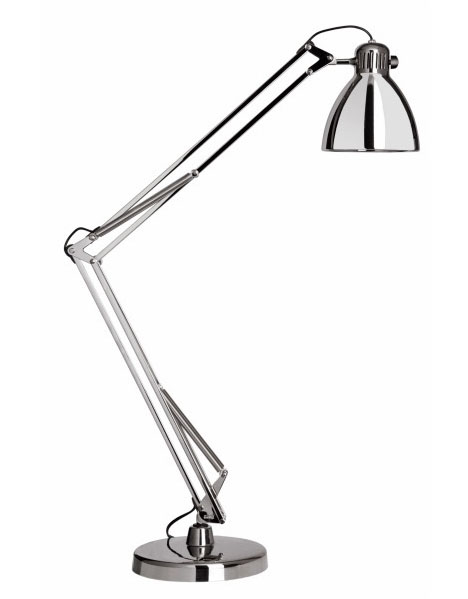 One of the many things the Anglepoise lamp's adjustable arm was good for was sewing. With a sewing machine you really needed to get light down by the needle, but it would also be helpful to occasionally get the light out of the way to manipulate the fabric. So in 1936, when a Norwegian textiles machinery importer named Jac Jacobsen ordered a bunch of sewing machines from England for a Norwegian textile factory, there were two Anglepoise lamps included in the shipment.

Jacobsen liked the lamps so much that he contacted their manufacturer, Herbert Terry & Sons, and asked about acquiring the licensing rights for Norway. The Terrys said yes—if Jacobsen would kick the deal off by buying parts for 500 of the lamps.

That was a major purchase at the time, but Jacobsen agreed. The Terrys continued manufacturing the Anglepoise for the UK and other Commonwealth nations, while Jacobsen started making his own for Norway.

But having a keen eye and some design skills, Jacobsen tweaked the design, Scandinavian-style, and by 1938 had his modified version ready to sell. It was called the L-1, and Jacobsen created a company to produce and sell the lamp. He named the company Luxo, Latin for "I give light."

Convinced he had a hit product, Jacobsen subsequently negotiated with the Terrys to obtain the licensing rights to sell the lamp outside of the Commonwealth territories. The Luxo lamp was born.

The Story of the Modern Desk Lamp, Part 2: Piggybacking Across the North Sea with Sewing Machines