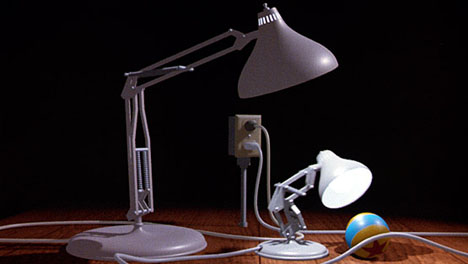 Hard to believe, but Pixar Animation Studios was once an unheard-of upstart. In the mid-1980s no one knew who they were, and they'd developed a computer graphics technology called RenderMan that was capable of producing the most photorealistic graphics of the time. They needed something to show the technology off, and animator John Lasseter was tasked with producing a short film for the annual SIGGRAPH computer technology expo.

Lasseter had, on his desk, a Luxo-branded Anglepoise lamp; the exact model was never revealed, but I'm guessing it was either the Luxo LC or LS. In any case, Lasseter had actually been doing films with lamps since his student days, so he set to work with the lamp as the centerpiece of his story, as told in this 1990 interview with Harry McCracken:

I started working on doing lamps. I modeled one Luxo lamp, and then a friend of mine came over with his baby. And then I went back to working on the lamp, and wondered what the lamp would look like as a baby. I scaled different parts of it down: the springs are the same diameter, but they're much shorter. The same with the rods. The shade is small but the bulb is the same size. The reason the bulb is the same size is because that's something you buy at the hardware store; it doesn't grow.

The resultant two-minute film, called Luxo Jr., is below.

It looks cute to us now, but you have to realize how mind-blowing this was in 1986. As Ed Catmull, Pixar's then-CTO, told Computer Animation: A Whole New World author Rita Street in the mid-'90s:

Luxo Jr. sent shock waves through the entire industry—to all corners of computer and traditional animation. At that time, most traditional artists were afraid of the computer. They did not realize that the computer was merely a different tool in the artist's kit but instead perceived it as a type of automation that might endanger their jobs. Luckily, this attitude changed dramatically in the early '80s with the use of personal computers in the home. The release of our Luxo Jr. ... reinforced this opinion turnaround within the professional community.

The Luxo Jr. character was subsequently turned into Pixar's now-familiar 13-second opening sequence for every film. An entire generation of kids who perhaps did not know the Anglepoise lamp before certainly knew it now, at least by sight if not by name.

By the way, Pixar not only mascot-ized the already iconic lamp; they actually developed a maintenance improvement that George Carwardine and Jac Jacobsen could never have imagined. Pixar designed a solution for what to do when the bulb burns out, and the technology is seen below.