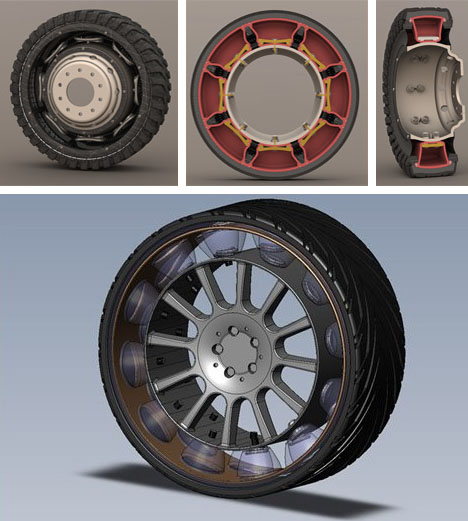 Inventor Brian Russell's Energy Return Wheel is another non-pneumatic tire, but whereas Resilient Technologies' NPT is passive, this one active absorbs and releases energy. As its name implies, the ERW spins shock absorption events into a modicum of forward motion. And interestingly enough Russell came up with the idea while designing sneakers whose soles would deliver energy returns.

Here's the intro video, which is too long by half, but scanning through it will give you the basic idea:

The following video, which I'm guessing was produced by tire and rubber manufacturer Britek after they licensed the ERW technology, uses a little more CG to give you an idea of how the thing actually works:

ERW stopped updating their website around '08 or '09, so I initially figured this was another tech that had fallen by the wayside; but someone from ERW has still been fielding queries on YouTube as recently as yesterday, so presumably the product is just trapped in development hell.