The Path Less Followed (or, Why I Didn't Work at Circuit City)

A student recently asked me how I got my first professional job as a designer. It reminded me of a particularly difficult journey I hadn't thought of in years. Looking at my resume my path seems almost predestined. It was easy for me to almost forget how difficult it was to transition from student to professional. It almost didn't happen at all.

My last year in design school, I was doing sponsored projects for both Nike and Nissan. The Nike project was going extremely well and resulted in Nike flying me out to their headquarters outside of Portland, Oregon a couple of times to meet with the team and David Schenone, then the head of footwear design. A few months out from graduation, Dave made me an offer to come out to Nike full-time. Arrogantly, I asked if I could defer my decision until after graduation so I could weigh all of my options. I wanted to finish up my project for Nissan and I was hoping it also might turn into an offer.

Little did I know that many companies were having a difficult year. In fact it was one of the worst sales quarters Nike had ever seen. I wrapped up the program with Nissan and they expressed interest in me coming there, but they wanted me to get a couple years of experience first. Nike informed me that I was at the top of their list, but they had a 6-12 month hiring freeze. Interest from other companies like Seadoo and Bombardier also cooled when they readjusted their budgets.

This left me with one full-time offer to work on the design staff for a small company that manufactured electric assisted chairs for seniors. While this was a great opportunity, it just didn't feel like the right fit for the 21 year old me. To the surprise of my friends and family, I turned the offer down, ate a healthy serving of humble pie and moved back in with my parents that June. 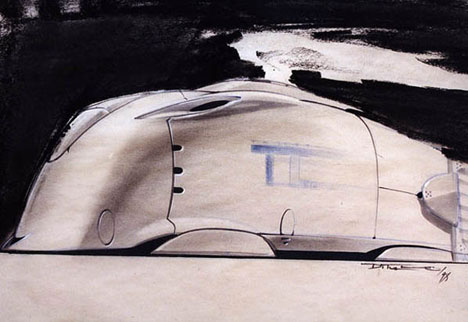 My folks gave me a deadline of 6 months to figure out what I was doing. I converted half of the basement into a makeshift studio and got the word out to everyone I could that I was freelancing. It turns out there is not a huge market for freelance work from young kids who don't really know what they are doing, but I got a couple of small contracts, a few of them on site with local firms. This at least gave me the sense of what it was like to work with professional designers and what the required level of work and discourse felt like. At night or when my freelance work was light, I would rework my portfolio, sometimes completely redoing projects. I took one day a week to mail out new work to firms and corporations as well as check in with some of the mentors I had cultivated in school to get their advice. Keep in mind this is when you had to actually mail booklets of work out to people and make phone calls.

My six months at home were running out as were my freelance contracts. I was starting to get that nagging feeling of self-doubt; maybe it wasn't just the economy, maybe I wasn't good enough, maybe I was saying the wrong things, maybe this wouldn't work out. The downward spiral found me filling out an application to be part of the sales staff at Circuit City. I was out of time, I needed a job, and Circuit City was happy to give me one. I felt like the door to becoming a design professional was closing, a goal I had worked toward since I was 13 years old. I would start at the big box electronics store in one week. They fitted me for a maroon blazer.

For most of that week I moped around the house, eating peanut butter out of the jar and watching cartoons. I felt like I was mourning the person I had never become... and then, the phone rang. Early Friday morning I got a call from a firm that had gotten one of my packets of work. They thought it showed promise and asked if I could come in that next Monday morning for an interview. The same Monday I was to start work at Circuit City.

That weekend I was so nervous I barely ate. Should I give up on my dream and go to work at Circuit City to make some money, or should I call in sick on my first day of work and go to the interview. The answer appears so obvious now, but it seemed like such a gamble to me then after 6 months of rejections. Monday morning came and I made my decision. I called up Circuit City and instead of faking a sick day, I told them I quit. "But you haven't even started!" the manager exclaimed. I had decided that not only would I go to the interview, but that I would leave it with an offer in hand.... And I did... 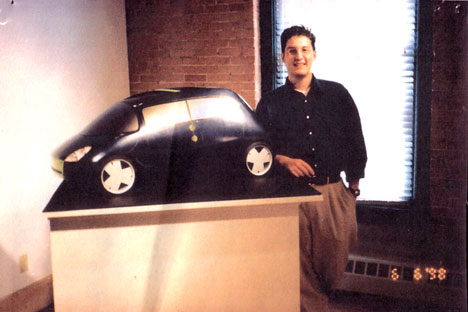 Above, a young DiTullo just before graduation from the Rhode Island School of Design with his 1/4 scale model of a Nissan family car.