The Bright Side of Disaster Relief: an Interview with Anna Stork of LuminAID 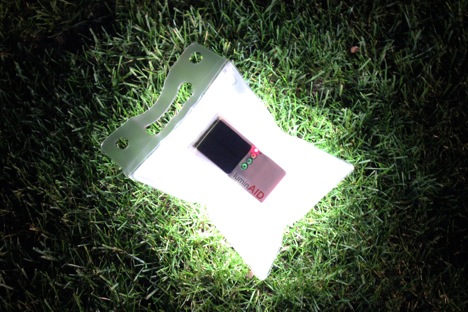 We recently had the chance to speak with Anna Stork, one of the co-founders of the LuminAid. Stork graduated from the Columbia Graduate School of Architecture, Planning & Preservation a few months ago. While she was there, Stork designed the LuminAID with classmate Andrea Sreshta and now they are embarking on a social entrepreneurship venture to launch the disaster relief lantern. Stork has been accepted into the Kauffman Global Scholars Program to further her work on the LuminAid.

Core77: So first off, what is the LuminAID?

Anna Stork: The LuminAID is a solar rechargeable lantern that packs flat and inflates. It's extremely lightweight and portable, but also waterproof and can float. It's very important for it to be waterproof as a lot of natural disasters have flooding. The LuminAID charges in around five hours in direct sun. It has two settings: high and low. On high, it lasts five hours, on low, it lasts 6-8 hours. I wouldn't even call it an invention; it's very straightforward.

The LuminAID uses a lithium ion rechargeable battery, like the one in your cellphone. The battery is very lightweight, but has a high density. The battery sits right next to a simple circuit board with a button, a charging LED, and a bright LED. It took a while to get the solar panel to be bright enough and to last long enough, but still be inexpensive. 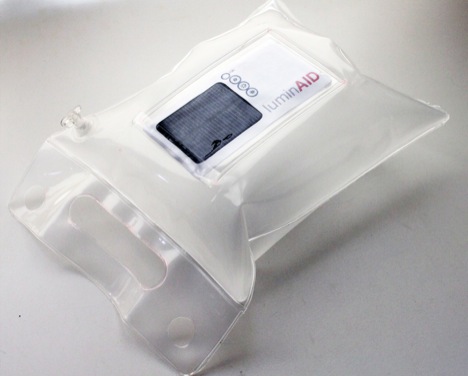 How did designing the LuminAID come about?

Columbia Architecture gives you a lot of flexibility to design at different scales. It's not so much an architecture school as it is a design school. In my second year, my second semester started a week after the Haiti earthquake. My studio professor decided to focus on designing disaster relief aid and structure. I'm really interested in energy and solar energy, so I partnered with one of my classmates, Andrea Sreshta, and spent the semester designing different scales of solar energy.

Haiti was 80% without electricity prior to the earthquake; afterwards, it was even less. We looked at what was being shipped to Haiti—food, water tablets, some shelter—but they weren't shipping anything related to light. Tent cities in Port au Prince are really unsafe. At night there were a lot of cases of rape and kidnapping. Whenever there was a light source, everyone was huddling around it. We wanted to design a portable light that could be easily distributed. 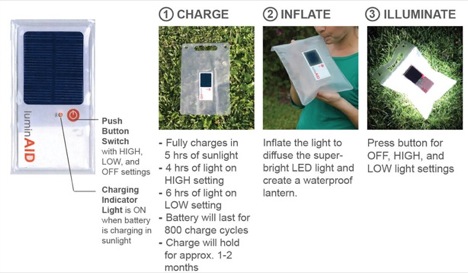 What was the state-of-the-art?

The Clinton Foundation shipped down 20,000 solar flashlights. It was the first time so many flashlights were distributed. But they're $15-20 each and also very bulky. Initially we weren't worried about the price. We knew that the tech could get down to that price level, but we needed something that could be easily shipped. If it's inflatable, it can pack flat and also be simple enough to use. We saw that a flashlight wasn't quite as useful as a lantern because you need something that you can carry to the latrine at night, but also light the area you're in. A lantern allowed for dual functions. 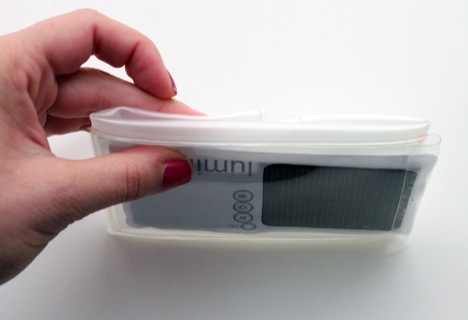 What kind of field testing have you done?

When we graduated, we went to India for a month and visited organizations that have orphanages and schools. We handed out some LuminAIDs and tested them in different conditions. We also gave some out to friends who are traveling around the world. The profits from our Indie GoGo campaign will fund the first round of production and field testing. We're manufacturing 3000 lights and will test in February. We'll also be distributing them to organizations in Africa, India, and one in Haiti. 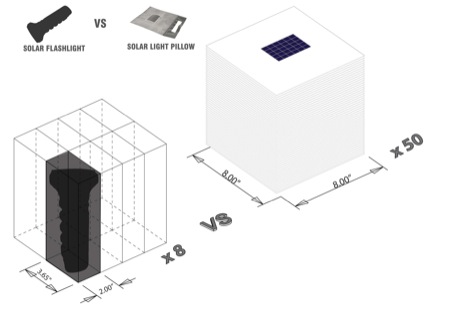 Was social entrepreneurship part of your plan all along?

I definitely didn't go into Columbia interested in entrepreneurship or social innovation. I was interested in sustainability and environmental design. I'm very grateful for Columbia and for a design background. In doing these business plan competitions this past year, we realized how important it is to be able to communicate your ideas through images and really rally people behind your vision. I do think design can go a really long way. I know in architecture school, it was rare that people were business-minded. For some reason architecture and entrepreneurship aren't as intertwined as they could be, but I think my classmates had amazing ideas that they could take really far. 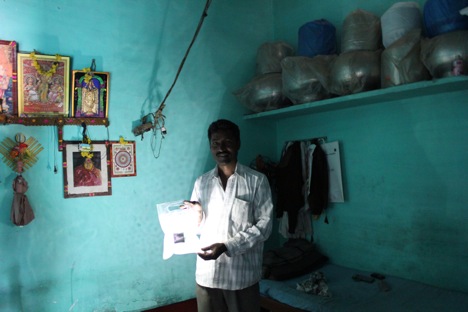 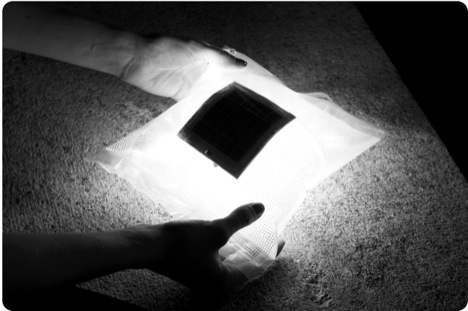 See also:
» The Messy Art of Saving the World - a seven-part series by Panthea Lee
» Redesigning International Disaster Response - A four-part overview by Dave Seliger
» A Liter of Light

The Bright Side of Disaster Relief: an Interview with Anna Stork of LuminAID