Case Study: miniMe and the Future of Integrated Health Care, by Ergonomidesign 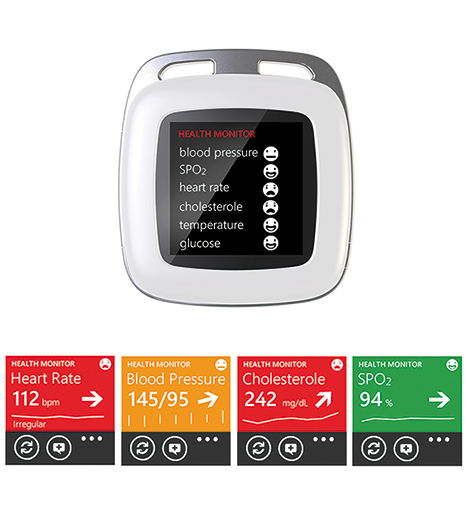 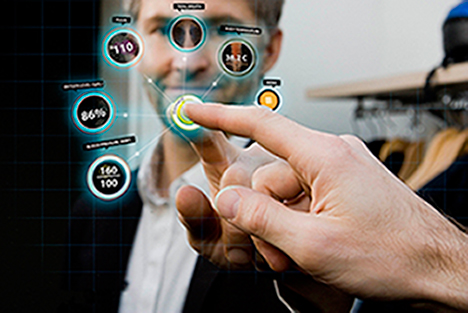 After over 40 years of pioneering work in the Life Science industry, a multidisciplinary design team at Ergonomidesign put together their take on the future for the Health Care industry. Their challenge was to envision the future and develop possible solutions for the world to test, use and reflect on. The outcome has generated many discussions, both in the Design and Life Science industries as well as with politicians and policymakers in the European Union.

This article describes how Ergonomidesign developed a vision of the future for Life Sciences and how this served as a guide as their designers prototyped how we might manage our own health and interact with doctors, family and other medical professionals and services in the year 2015.

An Integrated Future of Health Care in the Year 2015

In 2009 Ergonomidesign's strategists and futuring experts set out to analyze macro, life science, social and technology trends set ten to twenty years out. We knew that health care was changing and that we could be a part of shaping the future. We also knew that people were seamlessly integrating technologies into their day-to-day activities, social lives and health care management. What we needed was a clear vision about how different the future should or could be.

Trends suggested that by the year 2015, desktop computers as we know them today, will be relics of the past. Rapid advances in screen technology and the diminishing size of microprocessors will make it possible to invent new archetypes for the computer, coupled with new gestural and semantic languages. In an age of ubiquitous computing, our walls, tables and other elements in our environment will become platforms for us to interact on. It will involve access to information, and exchange and generation of data. Most importantly, these interactions will involve people connecting with people in the most serendipitous ways, through a system that is constantly aware and always connected, if desired.

Our research suggested that as we move towards the future of health care, people will increasingly need to feel involved and in control of their own health. People will also need tools to help them collaborate closely with health care providers, doctors and other people they trust to help them manage their health. 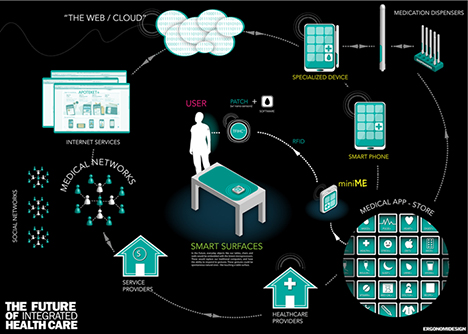 Our strategic work resulted in an eco-system that described the Integrated Future of Health Care in the year 2015 with the patient at the center of all activities, services, devices and products.

Our strategic work resulted in an eco-system that described the Integrated Future of Health Care in the year 2015 with the patient at the center of all activities, services, devices and products.

Bringing the Vision to Life

The vision needed to be grounded in the experiences of real patients. We introduced two characters that were assigned lifestyles and diseases as we tried to highlight potential real life scenarios. Throughout the entire design process, we leveraged the real world needs as we developed a service solution that would be as seamless, natural and effective as possible. 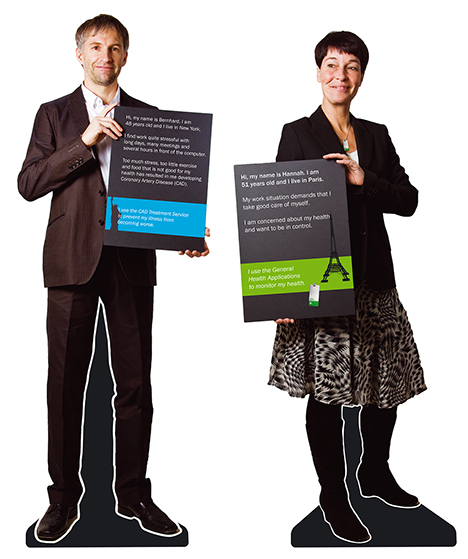 The two characters Hanna and Bernhard.

To tangibly visualize our characters and a glimpse of the future, the team developed the eco-system described in the Integrated Future of Health Care into an application for the Microsoft Surface platform (Surface application). This technology was chosen for its unique ability to invite people into interactions and conversations around the display. Representing a future smart surface, it also provided our team with the opportunity to explore natural user interfaces (NUI) and at the same time challenged the team to design for a full 360-degree interaction and multi-input, multi-user collaboration. 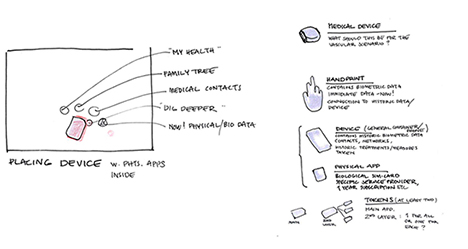 An early sketch of the application for Microsoft Surface.
An early sketch of the application for Microsoft Surface.Our aim was to illustrate the body as a container of biometric data. The simple act of placing your hand on 'a table' or any other type of smart surface, triggered an enlightened experience, e.g. you will be able to share and compare your biometric data with people you trust, subscribe to personalized treatment software and also have easy and constant access to your health care professionals. 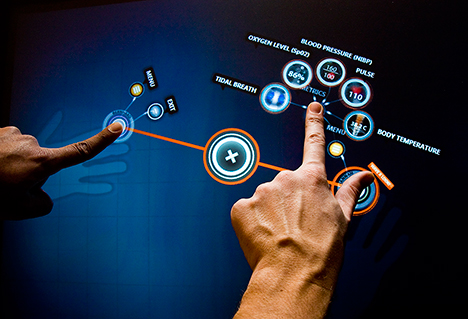 At the Medica fair in Germany (the world's largest medical trade fair) in November 2009, Ergonomidesign presented the concept of the Integrated Future of Health Care including a functioning prototype application on the Microsoft Surface. Already at this stage we had ideas about physical devices that would be able to read biometric data and communicate with all smart surfaces and lead to even more interesting ways of interacting.

After getting great feedback at Medica, we decided to expand the project and develop the next piece of the eco-system puzzle. In late 2010, we introduced miniMe. This futuristic medical device is a personalized monitoring device offering patients and their network constant access to bio data. 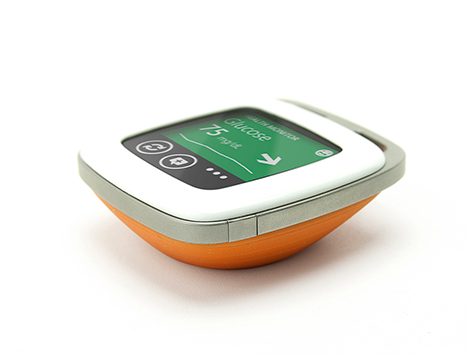 Core to the idea was that to support better interaction between people, devices and smart surfaces, it should be possible for all connected devices to be used separately or together with the Surface application. In concept, miniME uses biometric sensors placed on a patient's body to track health stats using RFID (Radio Frequency Identification) and NFC (Near Field Communication). It forwards their health stats through cloud computing so that patients, family members and HCPs can have constant access to data about their physical condition. Using selected shared networks, the data can also be viewed via mobile devices, other specialist medical devices and smart surfaces. 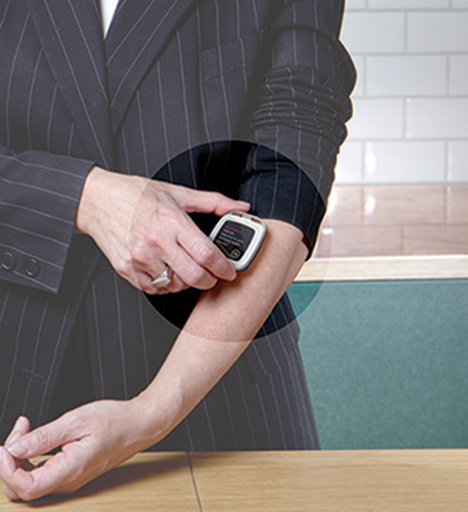 We also built a prototype of miniME that could communicate with the Surface application. Our goal was to have everything up and running on the Surface application within six to eight weeks. The design team worked in an agile manner in one-week sprints with clear tasks and deadlines for each individual. We started off with paper prototypes to work out the general flow of interactions and then shifted over to work mainly in Adobe Illustrator/Photoshop/Fireworks. Digital assets were created in Microsoft Expression Blend and continuously handed over to the developers to use to build the functioning prototype. The total user experience and usability was also continuously improved as we frequently tested the solution and propose improvements with people along the way. The entire development process was captured continuously with snapshots and video that we used in the final concept video produced at the end. 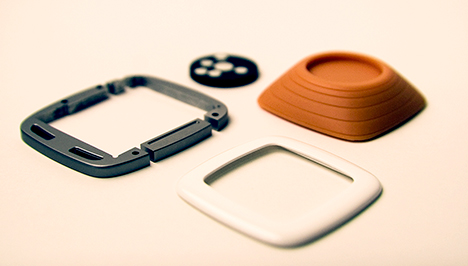 The prototype was based on an Apple Nano screen. For better legibility on its small and relatively low resolution screen, we used custom designed software skins with health-application specific icons and graphics. The interface of the miniME prototype was a simple slideshow to trigger interactions with the Surface application. An enclosure that allowed for easy positioning and interaction with miniMe was designed to wrap around the electronics unit. It was built using rapid prototyping tools such as 3D scanning and printing.

Using both software and hardware functioning prototypes, our vision of the future was finally possible to share. Our prototypes made it much easier for people to test, use and reflect on all parts of our suggested eco-system in an engaging way. We gave our audience the experience of actually being able to explore the future of health care. 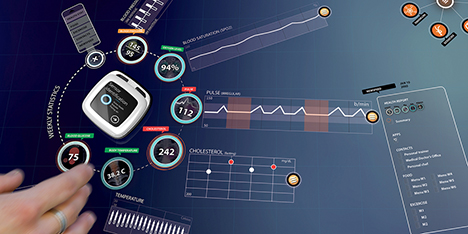 We carried out this project with our own resources and funding firstly, because we knew we could improve on the current interactions provided in health care, but this project also allowed us to be supremely creative, to explore the boundaries of natural user interfaces and to design for 360 degrees interaction. We used this project as an opportunity to try new forms of closer collaboration across all design disciplines and with software development companies. This collaborative approach was successful in helping us to achieve a better total experience by integrating service system thinking, hardware and software design, and it was fun and engaging.

miniME and the Future of Integrated Health Care created a lot of buzz when launched again at Medica in 2010. Many of the world's leading life science and technology companies were excited to discuss the eco-system and its implications on their businesses. Some of the companies are currently working with bits and pieces of the eco-system, but very few are engaged in the entire eco-system. 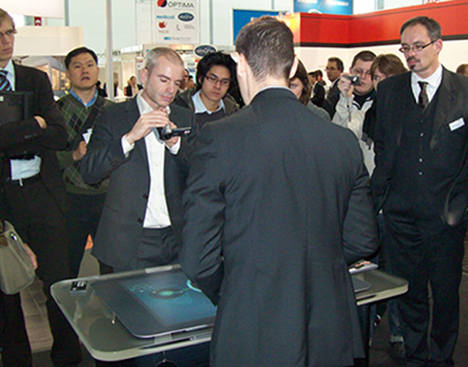 The concept generated a large interest when it was presented at Medica.

As experts in user-driven innovation with 40 years' of experience working with different types of users within the medical field, we are well aware that most of the proposed technologies are readily available on the market and that attempts are being made to bring them to life for consumers. Connected devices, networking and communicating through social media channels are all increasingly important and commonplace. In the future, we believe it will feel natural for us to use the same type of connected services for managing our health. Our challenge now is to help decision makers realize that the expectations of patients of the future will also change as they demand greater transparency and simpler interactions with even stronger security. These are the discussions we are in now with our clients. This is what we have been invited to discuss at the European Union and with other stakeholders and decision makers.

miniME recently won one of the world's most prestigious design awards, the IF product design award 2012. But as we write this article it has become clear to us that what we are the most proud of is the opportunity to increase the awareness among decision makers about how designers can significantly contribute in the development of health care services to increase the quality of life for people.

Case Study: miniMe and the Future of Integrated Health Care, by Ergonomidesign