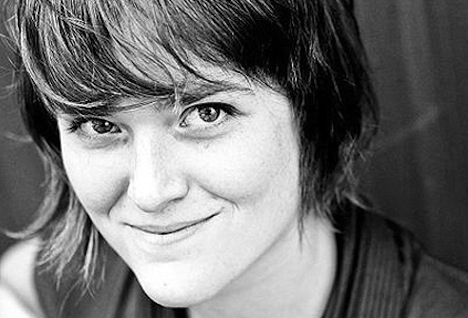 In our first preview of Interaction12, Core77 contributing writer Christina Beard sits down with keynote speaker and two-time Curiosity Club alum, Amber Case to learn more about cyborg anthropology, the merging of our physical and digital worlds and the prospects of becoming superhuman in our technologically evolving world.

"Good technology should make you superhuman," claims Amber Case, a cyborg anthropologist. Cyborg anthropology is a way of understanding how we live as technosocially connected citizens in the modern era. Case explores questions like: How is human experience evolving with technology? What are the implications to privacy in the digital realm? and How does technology affects our humanity?

In 2010 Fast Company named Case one of the most influential women in technology. She's given talks at conferences like TED and SXSW Interactive, and recently published A Dictionary of Cyborg Anthropology, a book that explores how technology is changing the way we live. Case is also a two-time Curiosity Club alum. Later this month, Case will give a talk on Ambient Location and the Future of the Interface, at Webvisions in New York City and in February, she will be one of six keynotes presenting at Interactions12 in Dublin.

Case believes we all live in the future. "We're able to touch a button and hear something on the other side of the world. We're able to carry a community in our pockets as we walk down the street," she says. By using anthropological methods to study human behavior and discover how people work, play, share and communicate she's able to make better tools for users for some of the largest companies like Levi's, Target, and Microsoft.

She looks to history to reveal the future. Specifically looking up to people like Mark Weiser, a PARC (Palo Alto Research Center Incorporated) researcher from the 1970's who came up with the concept of calm computing.Many people have predicted what Case envisions in our near future, but the technology was lagging. Today, we have the ability to create software that enables calm computing; the future has arrived.

Case envisions our world full of invisible interfaces. "At my house there's a GPS circle set up so when I get home it automatically triggers my electricity and when I leave it turns off. It's an invisible light switch that removes any required actions. You never come home to a dark house," she explains. She's currently runs a Sims simulation of her home to optimize the happiness of two people in a space.

As technology advances and permeates society, it reshapes us, changing our human characteristics, our ways of thinking, feeling and acting. Case sees this as a positive evolution. "The industrial revolution was a horrible period of isolation and non-connectivity, everyone was distributed by highways and cars and stretched out into the suburbs. It was a time when families were likely to get divorced, elders were put in old folks homes, and friends lived across town—the village was torn apart," she explains.

As we reorient ourselves in the 21st century, "technology has come back in and stitched all of that reality together so that you no longer have to worry about being geographically separate. It's giving us back a tremendous part of our humanity," she explains. "Advertisements that grew out of Industrial society pictured an, airbrushed reality of utopia, that didn't exist. Today we watch someone on YouTube in their living room, in their pajamas," she explains.

The boundaries of physical and digital realities are merging, causing many people to feel that privacy is diminishing. Case disagrees, she believes physical and digital privacy is analogous, "it's just a new interface in which to do it," she says. She believes that people give up some privacy in return for a positive experience. For example, "Instead of sending letters to family and friends we connect with people on Facebook because it's more efficient."

Furthermore, Case feels that we've adapted to a certain level of privacy invasion. "People aren't terrified of junk mail and that's a sign that your privacy has holes in it. We got used to it and it's part of everyday life," she explains.

Case merges a range of fields including anthropology, technology and design to help evolve user interfaces to create better experiences in the world. She utilizes anthropological methods to learn about a culture and then incorporates her observations into interface designs. "You need to be able to understand how a certain sector of reality works and the tool use of those people in order to make great interfaces," she explains.

Case believes that interfaces are increasingly becoming the essence of our experiences, and therefore should be as good as they can be, because sometimes it's life or death. "Recently, a couple with a child dying Googled the closest hospital because the ambulance wasn't coming fast enough. They drove to the hospital that was 40 minutes away. They showed up and it was an administration building. The child died. This is the importance of user experience and understanding what people need," Case explains.

Becoming superhuman would certainly be amazing, but creating functional interfaces is required in order to evolve the human and machine interaction.

You can follow Amber Case @caseorganic Or read her blog.