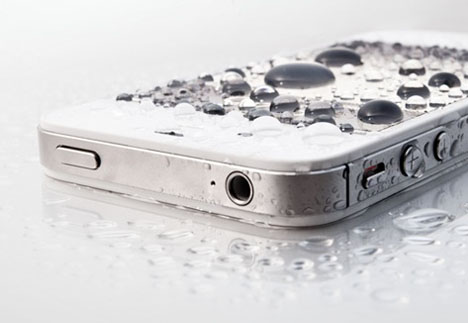 You know you were disappointed at the end of Signs when it turned out the sophisticated alien race could be defeated by... water. An enemy to our species becomes a lot less scary when it can be vanquished with a bottle of Evian.

Still, water ruins stuff for us too: Outdoor barbecues, a box of photos you stored on the basement floor, that smartphone you never should have brought into the bathroom. On that latter point, a company named Liquipel is aiming to render our electronic devices completely waterproof with a proprietary, hydrophobic nanocoating they've developed.Liquipel is a revolutionary process that applies a waterproof coating to your electronic device to protect them in the event of accidental exposure to liquids. It is not visible to the human eye, virtually undetectable and...will not compromise the look, feel, and performance of your electronics. [It] penetrates the entire device as a whole, including all of the vital components inside and out to provide optimal protection against accidental contact with liquids.

The video demonstration is dramatic, though counterbalanced with that lawyerish disclaimer that basically says "Oh by the way, don't try actually doing any of this stuff to your phone":

For now the company is only offering to coat devices that you mail in to them, an unattractive arrangement that will presumably fall by the wayside once they've licensed the technology directly to manufacturers. In any case Liquipel's technology has been deemed to have merit by at least one credible group: Like Ekso Bionics, they're also a 2012 Edison Award nominee.