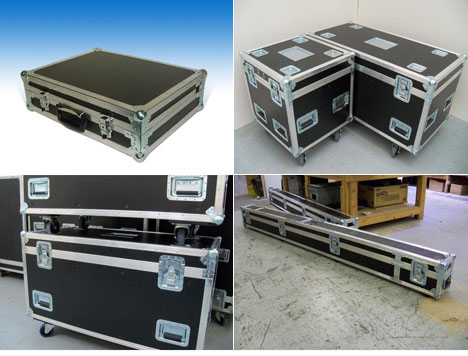 As designers, we all have lists of objects we'll never not stop to examine when we come across one. For me, what the British call a flight case ranks high on that list. (We call them "road cases" in the U.S., but I'll refer to them as flight cases here partly because you Brits invented the language but mostly because it just sounds cooler.)

The object's appeal is high: Rock stars, DJs and assassins all carry them, and they promise order and protection. Being able to wrangle an irregularly-shaped object and its accessories into a rectilinear cocoon of safety made of metal extrusions and perfectly-shaped foam cutouts makes me wish the Industrial Revolution was a person so I could high-five it.

We've spent some time scouring the web to find a good DIY tutorial on how to build a proper flight case--there are plenty of misnamed tutorials that show mere cabinet construction--but before we get to the one we like best, let's take a quick video look at what goes into building some.

This first one, a promotional vid by custom manufacturer Flightcase UK, shows both plywood and polypropylene-surfaced cases. The video's also noteworthy in that the narrator sounds completely hungover:

This second vid by Andrew Kennedy shows the handy Brisbane-based musician swapping out band camp for band clamps. Lacking narration it's not verbally informative, but the simple time-lapse footage gives the craftsperson thinking of tackling this project a good idea of what's involved by showing every step, start to finish:

Up next we'll show you the best step-by-step tutorial we've found, with comprehensive explanations of all the components comprising a flight case—and where you can get them.