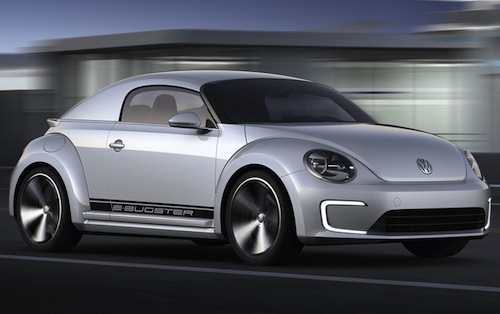 VW is determined to become the number one car company in the US, and with sales up by a staggering 26% since last year and a slew of new products, German ingenuity seems poised to conquer stateside. Their new line-up includes the Jetta hybrid and the E-Bugster, a concept car, both of which VW debuted at the 2012 North American International Auto Show in Detroit. Even though the Jetta is a real, ready to drive car, as it so often happens the E-Bugster concept got all the buzz. It's easy to see why. First, the Bug has always been the most popular sibling in a family of over achievers, and this new version is like the original Bug, only stretched out. But the similarities end there.

The E-Bugster is an all-electric coupe, a sporty little thing with a low, streamlined roof, 19" alloy wheels, zero emissions, a 100-mile range and 114 horsepower, which isn't too shabby, given that the average coupe or sedan gets about 100-150hp. Compared to other EVs it falls right in the middle. The Toyota Prius gets a combined 99hp while the electric drive unit of the Chevrolet Volt boasts 149hp.

Of course the E-Bugster, if and when it ever gets made, wouldn't be weighed down with the gas engine of current hybrid models. The 85-kilowatt electric motor is powered by a lithium-ion battery pack and, similar to the original Beetle, it's mounted under the rear bench. Instead of a tachometer, the dashboard displays energy consumption, intensity of battery regeneration, a driving range indicator and the battery charge status. And with an 80% recharge in just 30 minutes, charging the battery of the E-Bugster is easier than any other EV I've seen to date. One of the biggest gripes I've heard from garage-less city dwellers is that they have no way to charge EVs overnight, but with a 30-minute charge time even street parkers can pull up to a public charging station before heading home (and therein lies the next challenge for cities: more public EV chargers).VW has no plans to actually produce the E-Bugster, but because its Blue-e-motion electric propulsion system will be used in VW's electric Golf due out next year, there's a good chance it won't get buried in the concept car graveyard after all. And since the electric Golf will be 450 pounds heavier than the diesel model and max out at 86 mph (and yeah, because I fell in love with my bubbly, white Bug, complete with flower vase, thank you very much), I'll be waiting for the day the E-Bugster hits the streets.