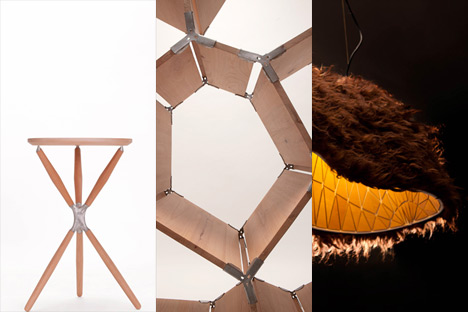 Great Things to People (gt2P) is a Chilean "parametric design and digital fabrication" studio that recently presented the three new projects that comprise their Digital Crafting Collection at the IMM Cologne 2012.[The concept is] based on the implementation of digital design methodologies and the experience and the know-how of Chilean artisans, who feed and contribute to qualify each "generative algorithms" or DNA. Through this concept gt2P has succeeded in communicating its ability to investigate, explore and experiment with new materials and processes, and integrate technologies CAD/CAM with traditional techniques and knowledge.

This isn't the first time we've seen nature-inspired or otherwise organic applications of 3D modeling and fabrication techniques used to created organic forms: Marc Fornes & THEVERYMANY's "nonLin/Lin Pavilion" comes to mind, as do Nervous Systems' "Hyphae" lamp and Neri Oxman's sculptures. However, the Santiago-based studio sets itself apart by incorporating local materials and traditional techniques in these three disparate "digital crafting" exercises, each of which is characterized by gt2P's highly formal approach. 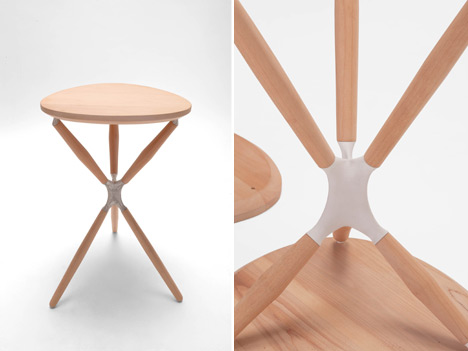 The "Suple" series is a vaguely biomimetic furniture construction system, centered (literally and figuratively) on a single connector piece that is fabricated with a combination of digital and traditional techniques:From these molds a cast of silicone is shaped (negatives). Then, the 3D printing is removed from the inside and filled with wax (positives). When removing the silicone mold, the wax is covered with a ceramic shell made of a kind of glue and sand. A casting cone is made to bring the metal into the shell, melting the wax at the same time. 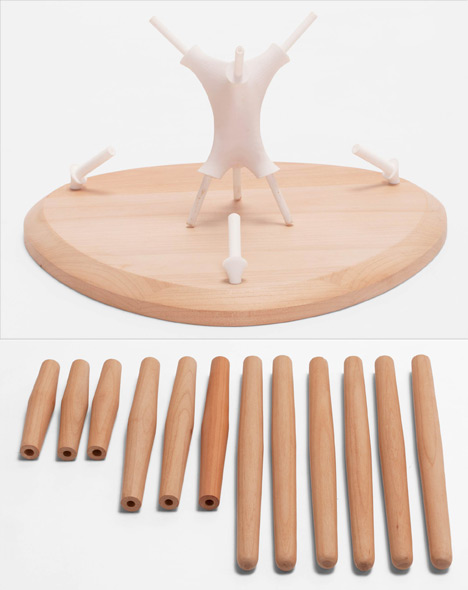 The legs of the occasional table were turned by hand, taking as reference the 3D printing pieces, and its cover was cut by laser. Finally, the wood was treated with varnish effect of "not painted", so that it retains its natural color, look and texture. This integration of digital and traditional processes made it possible to move from the 3D printing to the craftsmanship, to obtain unique pieces. 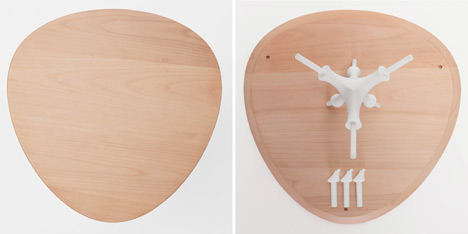 The side table itself is "made of steel and wood," with locally-sourced legs: "Suple is the first Chilean design that uses Raulí with dual FSC and Fairtrade certification in its manufacturing process." 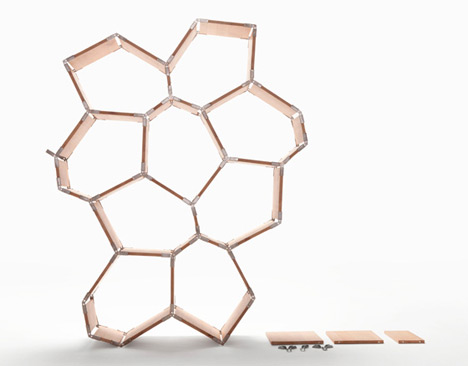 The "Cracked" shelf system is also made from certified Raulí Beech, where each panel is fabricated with embedded magnets in the corners for hardware-free assembly.It is shaped by different kinds of convex tessellations, regular and non-regular (in this case hexagonal type 8) made by rectangular pieces of wood, which can be combined freely in any direction, always filling the surface through such combinatorial. This product—from its general shape to the smaller pieces that comprise it—was parametrically designed using computer software. A set of pieces in steel of 1.5 mm thick was developed for the union system, which was cut by laser and folded with CNC machinery. 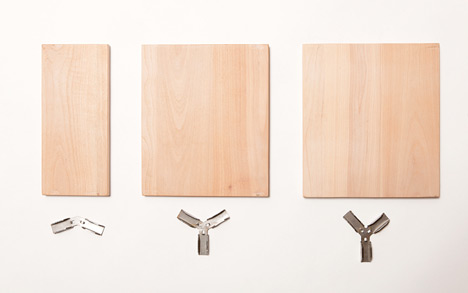 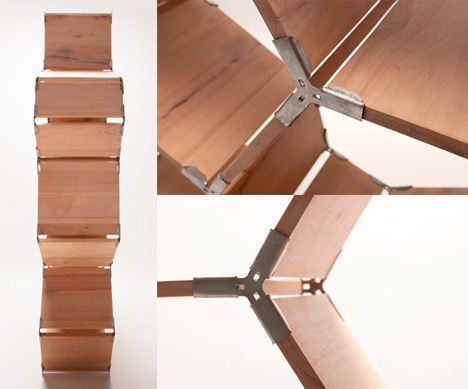 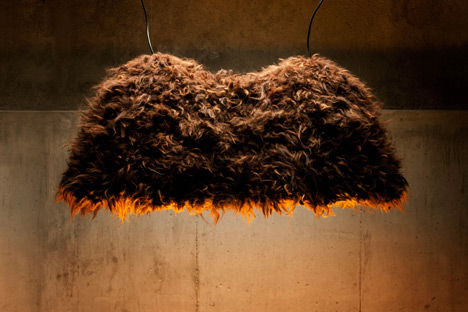 The "Gudpaka" Lamp, on the other hand, is more fauna than flora, a two-humped ceiling light dressed in alpaca wool:GUDPAKA lamp represents the concept of Digital Crafting in its maximum expression. It brings together manufacturing processes and production from both the field of digital and technological to that of the artisan and low tech.

It is a game of opposites. Besides merging digital and traditional (in its manufacturing process), meets also the global and the local (in its design process), vegetable and animal (in its appearance), smooth shapes and flat faces (in its geometry), northern and southern (in the Chilean materials used).

The manufacturing process involved the development of a low cost mold of cut and routed MDF by CNC machinery for thermoforming the structure that supports the materials that converge on the lamp. The inner faces of Coigue plywood were cut by laser cutting machine as well as the alpaca felt strips. Then, the outer covering was woven by hand from wasted hair in the process of obtaining Alpaca wool. 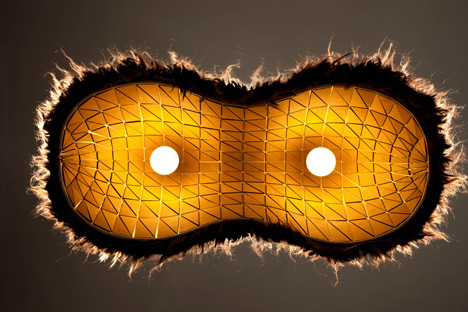 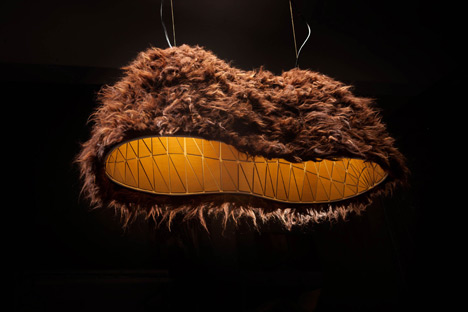 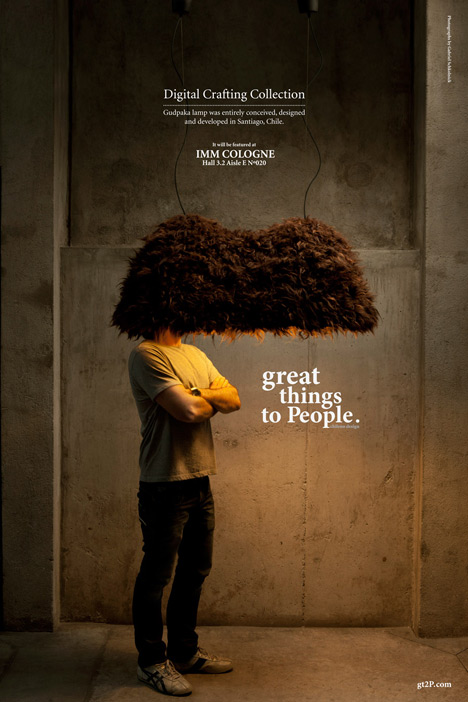 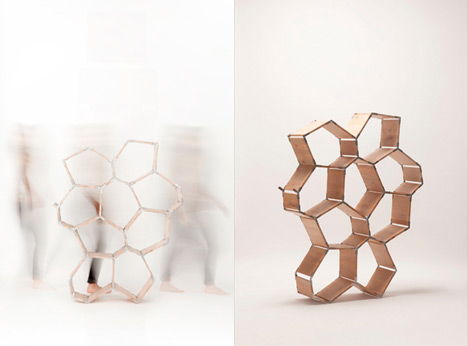 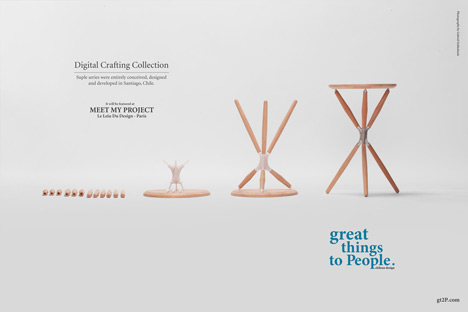 Great things to people (gt2P) is a Chilean studio in a continuous process of research and experimentation in production, technical, functional and aesthetic terms always in search of new proposals.