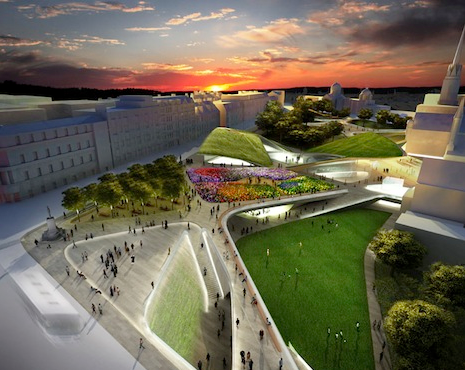 Earlier this week it was announced that Diller Scofidio + Renfro's proposal for Scotland's Aberdeen City Garden had been chosen over an impressive group of entries that included leading architecture and landscape architecture firms West 8, Foster + Partners, Snohetta & Hoskins, Mecanoo and Gustafson Porter. Diller Scofidio + Renfro (DS+R) have been commissioned for a slew of impressive projects in recent years, including The Berkeley Art Museum, The Broad Art Museum in Los Angeles, The Museum of Image and Sound in Rio de Janeiro, a new convention center in Bogota, the Hypar Pavilion at Lincoln Center in New York, and of course, the many phases of the High Line.

Charles Renfro, the Principal-in-Charge of The Aberdeen City Garden project calls his proposal, the Granite Web, a "true hybrid of building and landscape...Some of the other proposals simply placed pavilions in a park. We created a layered three-dimensional matrix where the building is woven under and into the park." The elevated areas in the 3D renderings look like raised butterfly wings, gigantic canopies under which visitors can go for a respite from the sun or to see a rock concert at night. The raised sections accommodate the 65-foot grade change in the park and the "webbed" passageways feed out into surrounding streets and transportation hubs. "One of the reasons we threaded the cross-paths was to create different parcels where you could have independent experiences," Renfro said. The park is located in the heart of the city and DS+R's design will make it a cultural epicenter when it's completed in 2016. The proposal includes a 5,000 person outdoor amphitheater, a 215,000 square foot exhibition hall and a 500 seat black box theatre, all of which will be woven into the landscape in accordance with the Granite Web theme. The proposal will soon face a public referendum, but it seems as if everything will go forward as planned. "The Diller Scofidio + Renfro team had thought long and hard about Aberdeen's special history and unique needs," said Sir Duncan Rice, jury chair. "Answer by answer, they overwhelmed the jury with their vision and their sensitivity to the whole downtown context."