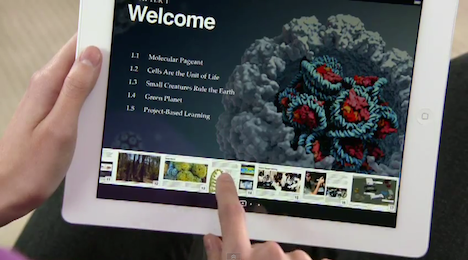 (I know this is a lot of text, folks, but there's also a must-see video down at the bottom.)

Apple's press presentation this morning, held at the Guggenheim in New York City, began by revealing some depressing statistics about American education: On average only 70% of U.S. high school students graduate, down to 60% in urban areas. (That's not much higher than one out of two, for chrissakes.) Compared with other countries, in rankings of math, reading and science, the U.S. is a lot closer to being at the bottom of the list than the top. And in a video presentation following these slides, schoolteachers across America rattled off a litany of things hobbling their efforts: Overcrowded classrooms. Crumbling facilities. Disinterested students. "We need to find out what's wrong," concluded one on-screen teacher, "and fix it."

"We want to help," concluded Phil Schiller, Apple's Marketing SVP, from the stage. While Apple obviously can't do anything about overcrowded classrooms or poor-quality facilities, the area they've chosen to focus on is student engagement, getting kids interested in the subject matter.

Schiller went on to explain that the iPad is the number one item on your average teen's wish list. And the device is a perfect replacement—a superior replacement—for the textbooks every student currently totes around (as if, it was pointed out, we were still living in the 1950s).

Enter iBooks 2, Apple's new app that ports textbooks onto the popular tablet. From a simple physical standpoint, it's an obvious improvement: A single 1.3-pound device versus 10 or 20 pounds of books. But from an interactive standpoint, as demonstrated at the presentation, it is leagues better than a static textbook printed on dead trees. In addition to containing all of your textbooks in one place, it offers a degree of interactivity invaluable in a field like education. Text, images, video, sound, and 3D models that you can rotate in space suddenly present biology or history in a way you could not perceive before. The material, as displayed in the demo, appears alive. You touch the iPad's screen and things respond. You manipulate, zoom in and out, investigate.

But aside from the fancy multimedia capabilities, the textbooks still contain those boring old blocks of text and raw data. Apple has monkeyed with this too by applying some clever tricks, some familiar, some not. If you don't know a word, touch it and the definition pops up. When you highlight words or passages with your finger, you can choose to annotate the passage with a note you type in. The software then compiles these passages into a list and even automatically converts them into flashcards—designed to look like index cards, naturally—that you can flip through in preparation for a test. (There's even a shuffle feature.)

I have to point out here that all of these are things I simply witnessed on-screen, and I am essentially parroting facts that were provided to me and relaying what you would have seen if you were at the presentation a few hours ago. But Apple has provided Core77 with a test iPad loaded up with the textbook software, and after I've played around with it for a while, I'll be able to write a more in-depth review detailing how the actual usage goes but you can see the video after the jump.In addition to releasing iBooks 2 today as a free app, Apple is also releasing their iBooks Author software (also free), which does what Garageband, iMovie and iWeb did for their successive fields: Make it incredibly easy, through drag-and-drop and heavy automation, to create content. Lastly, they made the announcement that iTunes University—a sort of educational podcast app on which schools like Yale and M.I.T. have posted lessons—has now been opened up to K-12 educators and students.

This foray by Apple into education is something I applaud. I have no illusions that this is a not-quite-philanthropic move—textbooks are a $10-billion-a-year market—but I'd be happy to see a U.S. company get rich(er) by doing something with some social significance. The iPod was a great improvement in my day-to-day life, and the iPhone's app ecosystem has greatly improved my efficiency, yet I'm aware that both of those things are, in a sense, frivolous: I no longer have to carry CDs around and I can read e-mail on the sidewalk. But by attempting to improve the education of children, by aiming their massive resources at how they assimilate information, provides an encouraging example that design, marketing, and business acumen can all be combined to not only create wealth, but perhaps improve the minds of future generations.

"We care about learning, and want to help improve that process," Schiller concluded.

The video shown at the presentation, shot in typically stirring Apple style, is below: