Interaction Design (IxD) is reaching a critical point in its history. We have spent the better part of the last half century converging. We have built our entire identity by bringing in other disciplines and practices into our fold. We are often decried as "land grabbers," but I say it is more about shoring up our knowledge base and practice so that we can be ready for the ever-increasing complexity of the tasks set before us through our acknowledged focus on human behavior as it relates broadly to the interaction of systems.

But it seems that in order to do this Borg-like assimilation of so many different sources (see this great video about Information Architects (IA) doing the same thing) we did not account for the long-term effect this might have on our community of practice, mostly due to our lack of solid foundation.

So it is with sadness that I announce that in the last year IxD, as a community of practice, has faced its strongest challenge to date. We have shifted from converging and assimilating to a community that is ever rapidly diverging.

The divergence is happening along the lines of the gravitational interests from where interaction design was born or where the slippery slope of our primary interest takes us. The divergence is also because the level of complexity of our problem sets have grown so vast that no single group can or should keep track of all of it. We have split basically along our primary lines of interest: Engineering, Individuals (psychology), Culture (anthropology) and Art.

While this year sees the greatest fracturing, I have been tracking the creation of these fault lines since I first helped to start the IxDA. Not unlike the early days of information architecture (IA) where talk of East Coast vs. West Coast IA filled the community's discourse, today the rifts we see in IxD are quite similar. People much like myself have forged interests and communities around the lines of engineering, psychology, culture and art, and each communities have forged practices that further set them apart from others. Rhetorical frameworks have been formed as well, further galvanizing differentiation and making it harder for disparate communities to share knowledge or more importantly, share in the creation of new knowledge.

For me, the image below best expresses how I see the current gravitational pulls facing the interaction designer today. 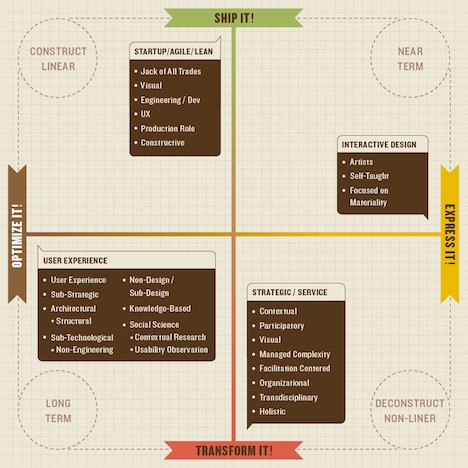 This grid represents the extremes of people's gravitational pulls. Few people practice at the edges (though there are some).

Let's review the axis and how they translate to the quadrants they create.First, the phrasing. Each axis of the graph is focused on delivering something although what that something is may be very different. That is the "It!" The question is, what is "It" and what verb are you doing to deliver "It."

Optimize It! This is where I personally started. Contextual Inquiry and Usability Testing was my way into a user interface. I made sure I understood end-user contexts towards creating solutions that were heavily validated, so that end-user experience would function.

This school of thought comes out of the roots of Human-Computer Interaction (HCI) and Human Factors. We can optimize the interfaces between man and machine through scientific rigor of understanding the human at the psychological level of cognition and behavior.

These Interaction Designers have tremendous respect for knowledge, research, and academia.

"Express It!" The opposite of this group are the artists. They hail from the world of New Media, advertising, interactive and game design. They come at their work from the point of view of expressing themselves as a means of creating a message.

This group looks at interaction design as a means of understanding the material of interactivity and its effect on human beings. This focus on materiality makes them ardent, mostly self-taught crafts people who have engaged in creating some of the most beautiful, emotionally engaging, and often least optimized experiences in multimedia.

"Ship It!" This group is fast on the rise. Start ups have forged such a large following that their culture has moved way beyond their economic model. Efficiency of production has led towards the creation of a culture of delivering with the least amount of overhead. For the first time, the classical "T shape" is no longer good enough. A true jack-of-all-trades designer is now required who can be graphical, technical and academic all at once. The focus of this designer is to not just deliver designs, but to deliver production.

"Transform It!" Epitomized by the recent surge in Service Design, this end of the axis is for designer who are very strategic. Who see that their designs can only be achieved, regardless of process or method, by going up the food chain and re-designing the organization and inviting the end-user themselves to design the more tactical part of the system.

When you look at the quadrants you can see an emerging pattern where by the top left is highly tactical, constructive and linear. The top right is where near term solutions are given favor over long-term thinking. The bottom right is highly deconstructive and non-linear and the bottom left is very long term. By plotting yourself along these axis, you'd probably end up in some sort of blob shape where you will see a large growth in a single quadrant. Where that growth and center-of-gravity occurs is your organization's focus.

SOFT OR HARD There is another split that the above graphic doesn't represent, or call out very well. There is a definite split between those interaction designers who are software-centric in their approach vs. those who have a balance between hardware and software. This former group of software people are working in systems where they inherit static almost ubiquitous platforms such as web, various desktop operating systems (Windows, Mac OS X, even Linux), mobile operating systems (like iOS, Android, and Windows Phone 7.5-Metro). The latter group of designers, work in systems with much less definition in the interfacing components (even if running on top of one of previously mentioned existing platforms. Embedded medical devices, kiosks, consumer electronics like cameras and navigation systems, and television screen are but a few of these types of systems. However, there are also designers creating systems based on emerging technologies like Near Field Communications (NFC) and Location Based Technologies that are converting spaces into interfaces or at least data gathering systems. The interests and requirements of these two groups have tremendous overlap, but also huge areas of cultural and praxis separation.

SUMMING IT UP As we diverge there are huge challenges facing us. The point of view that I'm most closely associated with is that of educating future interaction designers. This quadrangle of divergence has led to complete knowledge and practice sets that, by themselves, would each equal their own post-graduate education and many programs out there do cut along these lines: Service Design, HCI, and Interactive Design programs exist with the latter 2 having a strong base in academia and education. The one missing is the "Ship It" group. They don't seem to have an education path in the formal sense, but have relied on informal and social education tracks for education, which fits their cultural model. I mean, why "educate up-front" if your cultural rhetoric bemoans "design up-front."

But the problems are not just in education. They are in the intersections of the issues of human resource management, including hiring, career development and more.

Our challenge is not necessarily to re-converge but to figure out how to interweave—respecting the contexts that have reinforced this separation and learning how to collaborate and cooperate when the opportunity presents itself.

But my question has always been ...

Is there a core foundation, that ALL of these communities and practice types (if you will) share? What initially brought them together, or caused us to galvanize as a community of practice and what will keep these connections relevant for local and global communities who stick with the interaction design banner as one of their many representative identities?

And as I write this, I find myself sliding down that slippery slope of defining myself out of a discipline, yet again: "There is no IxD."

As we come to the global conference for interaction design that IxDA is now putting together for its 5th time, this might be a great time to breathe, take stock and reflect on the type of community we want to be, what challenges we are facing as we move forward and what opportunities are out there based on what we know we have access to achieving.

I'm sure others have different perspectives about the current state of IxD which is why I'm always excited to engage the deep and broad community that is the interaction design community of practice.

Pick the forum of your choice and discuss.

David is one of the founders of the Interaction Design Association (IxDA) and was co-chair at the inaugural global IxDA conference in 2008. He is published both online and in print and speaks and teaches at events and for organizations around the world.

Watching his son laugh at Mickey Mouse cartoons from the 30's and 40's is his new favorite thing.