Gracing the Art Skybridge at the Eugene Lang College of The New School is the interactive light and sound installation Artfix Mori, a collaboration between visiting artists Jason Krugman a kinetic light sculptor and media artist John Ensor Parker. 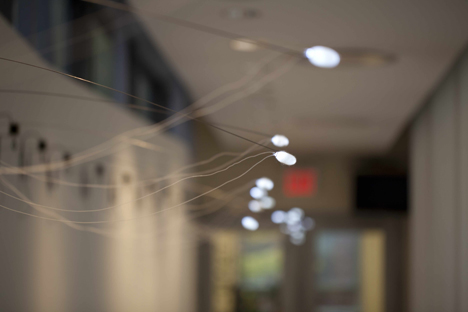 The Bombyx Mori is a species of silkworm valued for its production of silk. This silkworm produces a rare form of silk material that is harvested by being boiled while the insect is still in its cocoon. The harvested silk is then used in production of everything from touch screens to hydrogels. These cocoons are made up of silk string that can span up to a mile wide when unravelled. 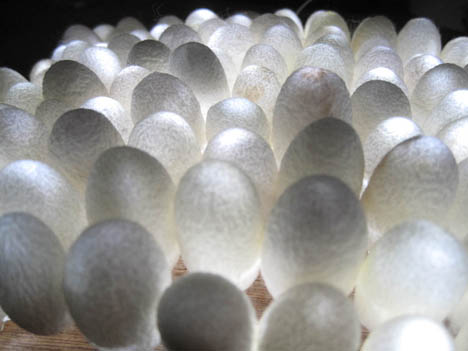 Spanning the curved corridor is a series of branches lit with LED lights tipped by the delicate silk cocoons of the Bombyx Mori. The branches are mechanical actuators that convert electricity into movement. Emanating light from the cocoons' emptied interiors, the branches of light bend and sway in response to the proximity of a passerby, creating a gentle clicking sound from the motors powering the system. Underlying the installation space is the warm drone of a sound piece designed from recording the wings of a hatched Bombyx Mori larva that would have emerged from its cocoon, playing back the lifespan of a Bombyx Mori at a frequency audible to humans. 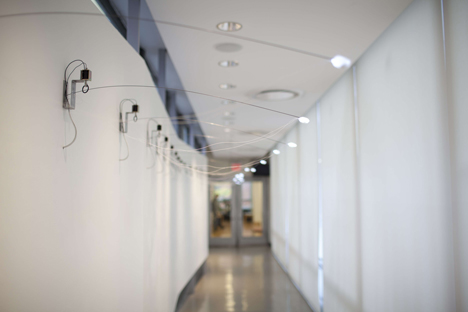 "In choosing the materials and subject-matter for this show, we sought to incorporate a modular design that is activated by the physical presence of the audience in attempt to imbue the work with an aspect of sentience and responsiveness. Bombyx Mori silk worms create cocoons as part of developed mechanism of self-preservation. By combining the Bombyx Mori with industrial electronics and actuators, we are re-animating these creatures, in effect, bringing them back to life while also taking advantage of them for their aesthetic beauty, and perpetuating our ongoing relationship with nature."

The passage of lights glow with the uninhabited cocoons, suggesting the presence of the absent insects. The installation is a thoughtful meditation on both the use of a material and a narrative about its origins. Artifix Mori provides the perfect cocoon-like for sheltering students and visitors from a hectic urban environment and the cold winter days.

Artifix Mori is on view until January 31 at the Art Skybridge at the Eugene Lang College at the New School for Liberal Arts. The Skybridge Art & Sound Space is Located at 65 West 11th Street on the third floor. Hours: Monday-Friday 8am-7pm and on weekends by appointment.