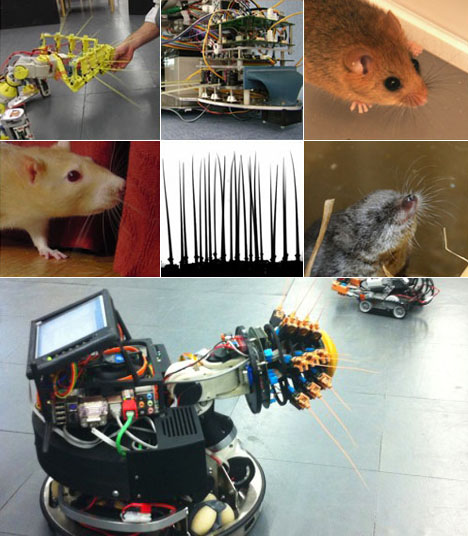 From the UK comes this robot designed with whiskers to "feel" its way around, or towards, obstacles. Maybe it's just me, but seeing the insectoid way this thing reacts totally creeps me out. Take a look:

The Shrewbot, as it's called, was developed by the Bristol Robotics Laboratory in conjunction with the University of Sheffield's Active Touch Laboratory, which explores "tactile sensing in animals, people and intelligent machines." It's based on an earlier version, the Scratchbot, whose video I've not embedded here because it looks like it was shot during an earthquake and I get motion sick just watching it.

Both 'bots are based on this "vibrissal" system that many mammals, from rats to cats, use to feel their way around in the dark. So why is it called the Shrewbot, as it's not like the thing nags you take out the garbage? The Shrewbot team offers no explanation as to why the whisker-faced Etruscan shrew was chosen over other animals, but maybe it's just because "Ratbot" doesn't have quite the same ring to it.