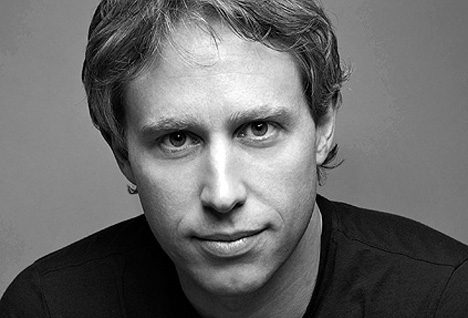 Luke Williams has been a champion for design innovation over the past 18 years—in consumer package goods for a company in Australia, at New York University's Stern School of Business through his "Innovation and Design" course, and as resident innovation expert at frog design. At frog, Williams has worked for the past decade to help define the global firm's practice and approach to innovation. The Core77 community might best know Williams through Disrupt, a book he wrote to, "reflect on all the different tools and methodologies I've learned through innovation...and on the meaning and terms I use with clients in the business school." We recently had the opportunity to catch up with Williams here in New York City. Besides insights and some great personal anecdotes packed into our half-hour chat, Williams shared a preview of his keynote for next week's Interaction12 conference in Dublin.

So, every doorknob, every table and every coffee cup has potential to be seen as this interface object. There has never been a more exciting time to be in interaction design. Because interaction designers essentially get to rethink all of these basic human interactions that have been around for 50, 100, maybe thousands of years in some cases. We're at a point in time where they get to rethink those interactions. So, they challenge the clichés that have always been there about how we interact with things at a day-to-day level. And, basically see if those things can be improved.

That's a pretty exciting way to set up the whole entire conference. It is such an important role and job because the future is going where these interactions are. Many of these interactions of the moment are simple; they're the fabric of everyday life. Now, what we risk doing when we're layering on information and connecting with information networks is to make simple, everyday interactions complex, cumbersome and frustrating.

My mother is my basis point for interaction design. She retired and decided she was going to take a computer course because she hated computers (like many parents do). And, she came back after the first lesson and she was furious. I said, "What's wrong?" She was looking at me as if I was part of the problem. She said, "The language of computers is just ridiculous." "And, what do you mean by that?" She replied, "Do you know to shut down the computer I have to go to the start button?" and that never had occurred to me before.

Now, I've since found out that that's an old joke with Microsoft and they even joke about it internally. But, this is exactly the problem. If my mother, in the future, has this same problem with her morning cup of coffee because we turn the coffee mug into an interface object, there's going to be hell to pay. So, this is a double edged sword. There's incredibly exciting potential for interaction design once everything gets layered with information and they can rethink these interactions. But, there is a big, big responsibility there for interaction design to get these interactions right.What are some of the trends that you've seen coming from the business world that you feel that interaction designers should be aware of when thinking about the users of the future? We've already addressed the main trend, from a broad level, of everything becoming an interface object. Also, computing power is disappearing into the fabric of everyday life which means that we can use many more natural gestures for how we interact with information in the world. So, we're starting to see a lot of those gestures being formed at the moment with the iPhone and the iPad and what's happening with touchscreens.

Related to the increase of gestural interactions, we're seeing products released into the marketplace, not just as physical objects, but as a system of connected services. What role do interaction designers have to play in our increasingly linked future? In Disrupt I talk about one of the main barriers to innovation at the moment is that companies still see products, services and information as isolated; they shouldn't be. They should now be looking at them as those blended hybrids where it's almost impossible to separate the product, service and information component. And, what that means the products, services and information live in an ecosystem and the relationships between those things is far more important than the products, the services or the information components by themselves.

I think we're starting to see more products or services that are coming are these kinds of hybrid offerings that are coming to the marketplace for the mass market—the iTunes, iPad/iPhone, being the most probably visible of those products.

You look at the iPhone and it's very hard to separate out the product and service components—the information network that it's attached to and all the partners in the value chain. It's very hard to break out of that isolated mentality even for designers, because you have people trained as product designers and they're working on a product or service designers and they work on the service.

In the book, I encourage people to do this: If you've got a product and you're working on the ideas for the product, then start thinking about those other components—how you can bring in a service component or an information component—and blend those together. So, it doesn't matter where the idea starts, but it matters where you end. So, you have to bring those things into play.

It goes back to the value, the end product that you were talking about... But the other thing is to blend the benefits. When I was evaluating ideas as a creative director, I often found that designers would primarily be thinking about benefits from the perspective of one audience, and that was all from the end user. So, the benefits are very lopsided and, in fact, often too lopsided for the solution to be successful.

How can designers embedded into organizations or bidding for client work integrate disruptive thinking?

And designers are often engaged in that process of incremental change. It's easy to see why this happens because if 90% of the company's revenue is coming from one particular product, for instance, 90% of the company's effort is going to be going into improving their product; making sure it's happy. But, I'm concerned with that 10%, which is the future of the company. It might be those things that don't exist at the moment. So, most organizations are very, very good at prediction, so predicting the next three years where their sales are going to go, what the product improvements or the new features should be. But, they're very, very bad at provocation; they have no deliberate system for provocation, for asking the big, challenging, "what if?" questions that would change their thinking on their business and the competition they're facing.

And this is one of the key things that we're talking about: the difference between prediction and provocation now. I believe it's the role of designers to be that source of provocation for the organizations that they work for or for their clients. They have to be the ones coming up with these disruptive hypotheses that really challenge the business' existing way of operating. And that means their clients shouldn't be happy and comfortable with all the ideas that they're putting forward all the time.

The objective isn't to make the client happy; the objective is to make the client uncomfortable because you're presenting solutions that they haven't thought about before. You're forcing them to think in a new direction. Too often I think designers fall into the trap of just giving their clients what's familiar to them because that's their path of least resistance—the path of least friction in client relationships.

So, maybe the main thing I'll be doing at IxDA is really pushing hard this message of it's a designer's role to be that form of provocation.

So the designer should be the provocateur? At IxDA I'll be talking about the need and the how of crafting these disruptive hypotheses. There's a huge difference between a regular hypothesis and a disruptive hypothesis. And, it's a distinction that's not made enough in design. A regular hypothesis is taken from the scientific definition: making a reasonable prediction. So, if my cell phone's not working, I hypothesize that the battery's dead. So, I plug it in and charge it; if the screen comes up—hypothesis is correct, if it doesn't, I need a new hypothesis. So, we make a reasonable prediction that we can test and then validate.

I'll be encouraging the IxDA audience to become experts at it; I'll be talking about the process of how to come up with these disruptive hypotheses. You have to be wrong at the start to be right at the end.

In my business the pressure to be right at every stage of a process for creating something new is inhibitive. In this stage-by-stage process, there has to be validation of the brief before it goes to the designer. And the designer's research has to be validated before they're given the concepts. Then the concepts have to be validated. If you're forced to be right at every stage, by the time you get to the end you've just produced something that is fairly generic. You've rounded all the edges off. That's why we say all innovation starts with disruptive hypotheses—forcing yourself to be wrong at the start. You're shaking up the way you and your client think about a category in order to be able to get to a position where you can see the right solution at the end.