IKEA has just introduced two LED pendant lamps, both so new that at press time they were not yet posted to Ikea's website. We were excited to get an early look at their VASTER (first shot above), made from steel and acrylic, and their KLOR (second shot above), made from nickel-plated steel and polycarbonate, as well as hear the design stories behind them. (Note that both stories have apparently been translated from Swedish—or it's IKEA policy to drop the article and refer to objects as if they're people.) 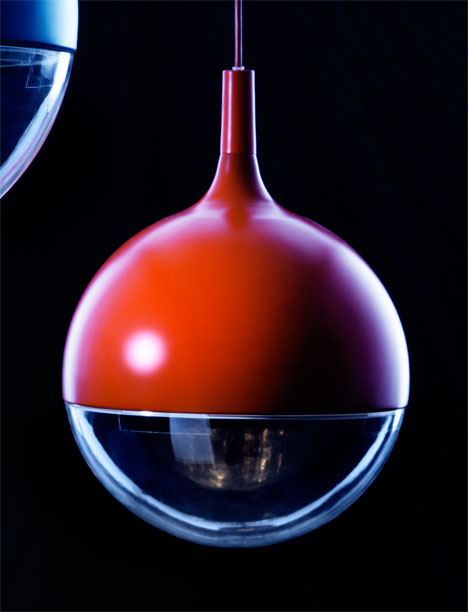 VASTER, interestingly enough, started with a design failure:VASTER started out as an [upright] lamp with an unbelievably small lamp head, made possible by LED technology. Sitting on a thin pole, which can be at a low, medium or high position, VASTER floor lamp lights up the whole room from its fisheye-shaped head. [The IKEA] office went crazy when they saw [the] lamp and immediately wanted to make a pendant lamp in the same design.

But the efforts weren't as successfulâ€¨ as everyone hoped. No matter how the designer and product developer turned and twisted VASTER, even putting several lamps together to get a good pendant lamp, it never really worked. Too awkward, too ugly, too... well, it just was not very good. Until someone said, 'Hmm, just because we can make small lamp heads with LED, doesn't mean we have to. Can't we just make it bigger so people can put it above a dining table?'

...That's why VASTER increased in size by 500%. When the first prototype arrived at the office, everyone was eager to see how the new, big VASTER would look hanging above a dining table. The group walked over to the dining table exhibition area and started to testâ€¨it. As chance would have it, the product developer for dining chairs was also in the area. 'What a nice lamp! Do you think we could do it in colours other than just white, so it matches our dining chairs?' she said. [Thus] red, blue and white were coordinated with REIDAR chairs.

In spite of its large size, VASTER pendant lamp also has LEDs, which use up to 85% less energy than traditional incandescent light bulbs. 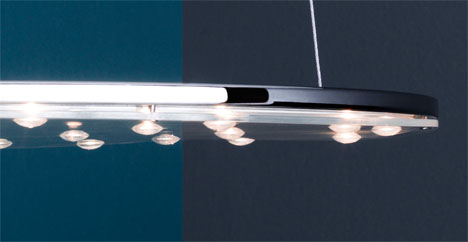 The KLOR lamp, on the other hand, was inspired by sidewalk serendipity:

While visiting an LED supplier in Hong Kong, an IKEA product developer walked down Lockhart Road [which is] lined with almost nothing but bathroom shops, [leading him to spot] ever-growing shower heads in the bathroom shops. 'Hmm, shower heads are getting bigger and LEDs are getting smaller. I bet there would be room for a lot of LEDs inside a shower head,' he thought.

The assignment in Hong Kong was not to create shower heads with lighting in them, but to develop a few new lamps to be placed over the dining table. After talking about his idea with the design team Knut Hagberg and Marianne Hagberg, the design of the new lamp became apparent.

That's why if you look closely, you'll see the family resemblance between KLOR and all large shower heads. If you examine it even closer and look underneath, you'll see that each diode has a little encasing around it, almost like a drop of water. These are not there just to look good; they work like a lens to spread light evenly and without glare.

An IKEA rep says both lamps are now available in the U.S. and Canada, and that their website will be updated with them in a day or two.