Product Revue: A Look at KeyShot 3 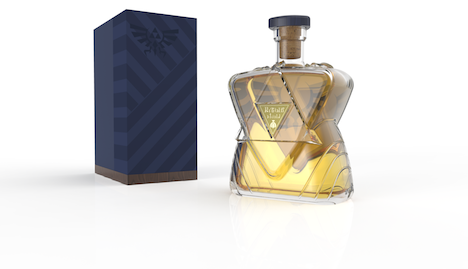 Over the past couple weeks I've spent some time digging into Keyshot 3, the latest release from Luxion. I was optimistic when Bunkspeed and Luxion parted ways, splitting the excellent HyperShot into two separate software packages, Bunkspeed Shot and Luxion KeyShot. [ED. NOTE: Hypershot 1.9 was technically replaced by KeyShot and not SHOT. The rendering technology that was used in Hypershot was improved and updates with the release of KeyShot. When Bunkspeed failed to pay licensing for the rendering technology, they integrated the iray render tech from mental images and rebranded it as SHOT.] If you don't remember, the core of HyperShot more or less became Keyshot. The computer I used to review is a MacBook Pro, with Windows 7 (via Bootcamp).

My CAD tool of choice is Solidworks complimented by PhotoView 360 for creating renderings. I've tried a number of other tools, such as Maxwell, but I kept coming back to PhotoView. It is integrated into Solidworks, scenes are easy to setup, there are enough options (but not an overwhelming amount) to dial it in. Renders don't need to bake forever to look decent and the results are "good enough."

KeyShot 3 has arrived with a large number of enhancements and new features. The most notable being the integrated animation tools. Out of the box this feature is fully functional, and small preview movies can be saved. An add-on purchase is required to unlock exporting full resolution animations. In addition, from the render queue to the material editor, everything is cleaner, more intuitive and redesigned.

Installing and licensing KeyShot 3 was simple. A free demo version is available from Luxion's website along with a handful of plugins for popular CAD packages. As a designer who is primarily Mac based, I was pleasantly surprised to see Windows and OSX versions.

For this review, I sought a realistic scenario where I'd need software like KeyShot 3. High end design renderings are often used to evaluate the appearance of products that are difficult to prototype and as virtual photography for marketing and promotion. Complex & translucent objects are usually a good test for rendering software in regard to realism and speed. I decided to design a glass bottle for a fictional, high-end liquor brand: Hylian Mead. The "client" is the Hylian Meadery, located in the kingdom of Hyrule (the setting for Nintendo's Legend of Zelda video games) After a few thumbnail sketches, I settled on a design. 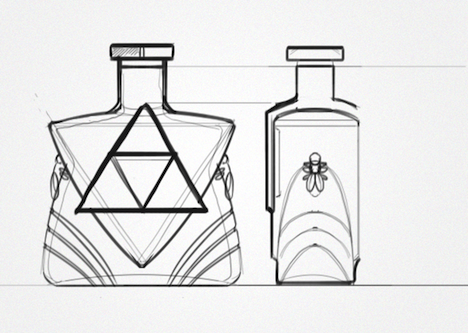 After a few hours of modelling, I launched KeyShot 3. The software loaded quickly and I immediately noticed the wonderfully elegant and clean user interface. An empty HDRI studio and six icons along the bottom: import, project, library, animation, screenshot and render (Image 1). had already downloaded and installed the Solidworks plugin or KeyShot 3. I have rarely gotten good results moving CAD data from native Solidworks assemblies into other rendering packages. Either I have to tinker with export / import settings, parts or bodies are missing, tessellation is flawed or worst, an outright failure. 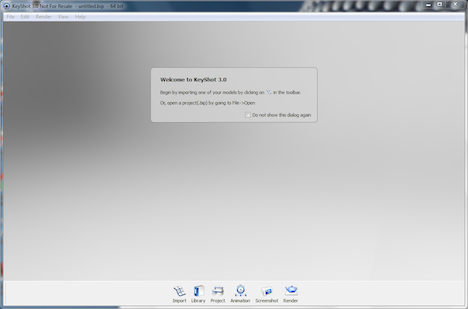 I clicked the 'import' button and selected my Solidworks assembly. KeyShot 3 prompted me with a few options (below) but I continued with the default properties. Within a few moments, my model appeared. Complete. Nothing was missing, the tessellation looked spot on. I clicked the project button and a floating, tabbed window appeared with a hierarchical tree containing my assembly. 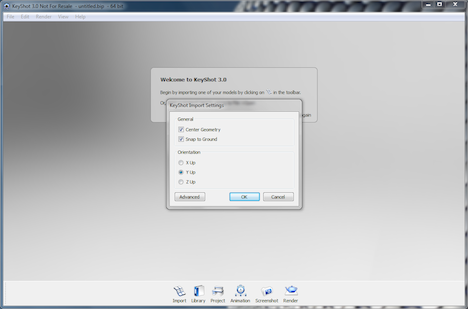 The parts and bodies where all present, nested as they should be. Construction surfaces that were "hidden" in Solidworks were imported visible, but I simply deleted them. The rest of the tabs are logical and intuitive all relating to the current scene. 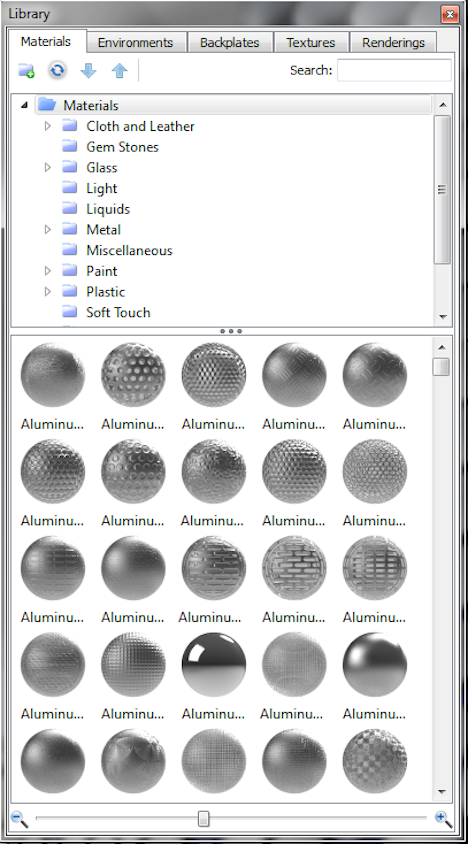 Clicking "library" opens another floating tabbed window (Image 3) containing materials, environments and textures. As expected, applying materials is a simple matter of dragging and dropping from the library to the main model view or onto a specific part in the nested tree.

Animation is another floating window with a timeline style interface. Animations such as translate, rotate, etc. can be applied to multiple bodies (or cameras) and overlapped. The built in animation wizard makes it ridiculously easy. Animations play back in the real-time render window. Pretty sweet. 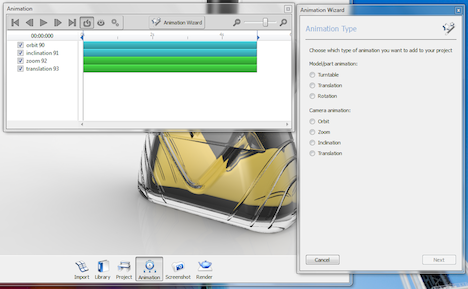 I appreciate the lack of "fanciness" with this interface. Luxion didn't try to make something different or cool. Instead, it is elegant yet conventional in a good way. Everything is where I'd expect it to be. I never found myself hunting for something.

KeyShot 3 ships with over 600 materials and a library of textures. It was easy to find a glass material and a liquid material to start with. I adjusted the color and saved a new one. Creating new ones is as simple as picking a material type and adjusting the settings. Making a cork material was straightforward, using a cork texture. 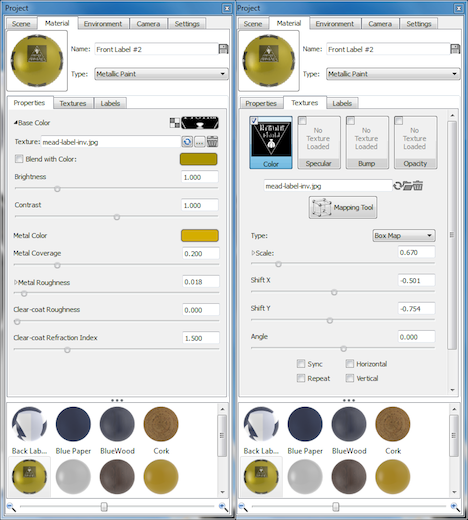 My bottle needed some labels, and I created a few in Photoshop (image 5). There is a dedicated label tab in the material editor, which allows multiple labels to be place per material. The back label was a two sided label with the "adhesive surface" visible through the glass. While looking at one side of the label surface, I applied a label. I rotated around 180 degrees and applied a label to the other side. I was actually surprised it worked. Positioning the labels as simple as dragging in the model window.

After applying the labels, I immediately noticed that some of the internal surfaces weren't being illuminated. I guessed that with multiple layers of transparent surfaces the default limit on ray bounces in the real-time renderer was being hit. In the project settings tab, I enabled a few advanced features and increased ray bounces from 6 to 13. 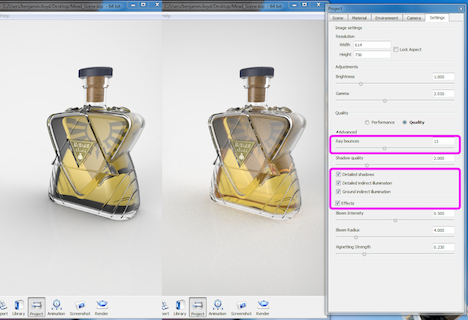 KeyShot 3 is rock solid. Performance was snappy, even running on a Core2duo based Macbook Pro. It didn't crash or lockup. One of KeyShot 3's selling points is that unlike the competition, the renderer is entirely CPU based. No need for a high end graphics chipset. Rendering may be a bit slower, but KeyShot 3 will run on any computer.

Inside the KeyShot 3's render window, there are three render modes: max time, max samples, and advanced which allows the customization of the usual settings. I experimented with the time and sample limited modes but found the best results using the advanced mode. These images are untouched, having baked for about 8 hours overnight. I was impressed with the results. 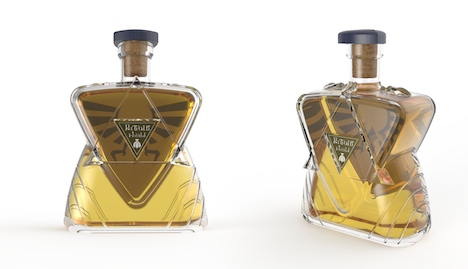 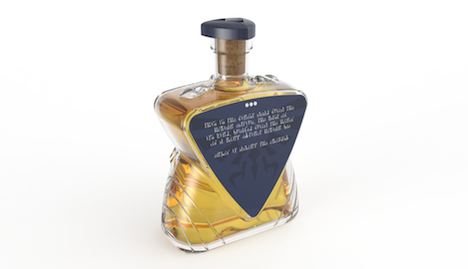 In the short time I've spent with KeyShot 3, I've been continually impressed. From the work-flow the straight forward and accessible controls to the well designed tools for creating materials and scenes, everything has been carefully considered. The flawless Solidworks importer is a huge bonus. It may soon become my goto tool for rendering my CAD models.

Product Revue: A Look at KeyShot 3