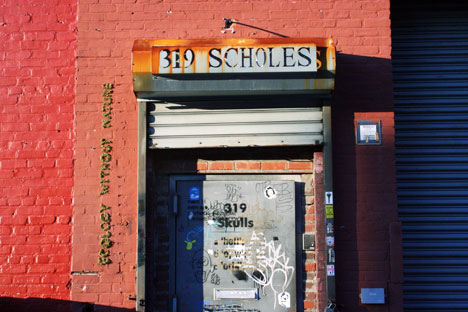 Several weeks in the making, Art Hack Day took place just over a week ago and was by all accounts a sure sign that the digital counterculture is alive and well in 2012. From from January 26–28, Brooklyn's 319 Scholes—an exhibition space in the no-man's-zone between Williamsburg and Bushwick—hosted the 48-hour hack-a-thon, which started on Thursday night. By the time I had a chance to stop by on Saturday afternoon, it was all hands on deck as organizers Lindsay Howard, Marko Manriquez and Igal Nassima were rallying the troops in anticipation of that evening's one-night-only exhibition of the pieces, projects and collaborations by all variety of tech-savvy creative type. 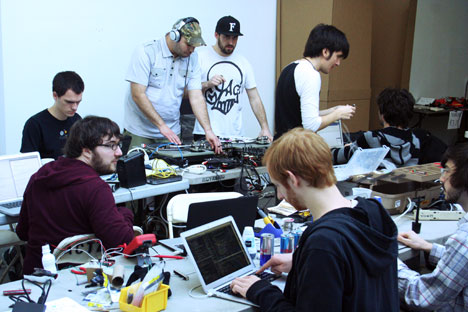 Incidentally, I ended up reporting on NYIGF just a couple days later, and it was essentially an antithetical experience. From the product-driven premise to the oppressive interior of the cavernous convention center—not to mention the alternately aggressive or disinterested attendants lurking amid labyrinthine booths, hawking their latest injection-molded doodads—suffice it to say that materialism was on display throughout the tradeshow, in stark contrast to the ingenuity and imagination that characterized Art Hack Day... 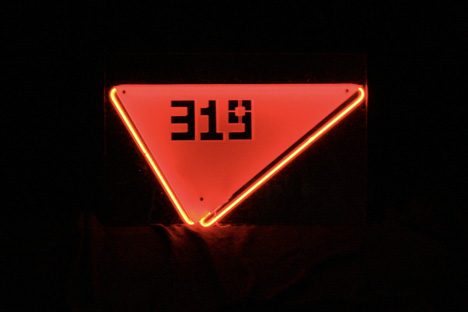 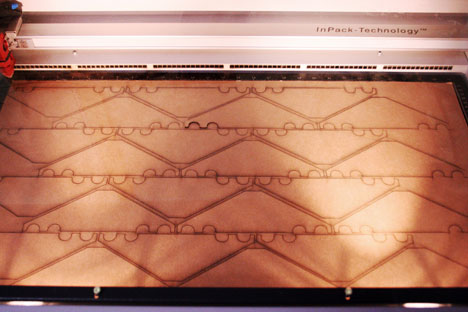 Former Core77 intern Marko Manriquez was on lasercutter duty, contributing signage (above) among other precision-cut objects for his fellow art hackers. His new-ish plaything also allowed him to explore his interest in "Ecology without Nature," a.k.a. moss graffiti:Made using laser cut stencils and a "moss milk shake" blend of moss, beer, water and water retention gel. Moss Graffiti serves dual functions to beautify urban spaces and as camouflage for tiny sensors (C02 & VOC) embedded for monitoring air quality and vehicle exhaust for upload to IoT sites such as Pachube. As eco-graffiti or green graffiti, moss replaces spray paint or other toxic chemicals and reactivates liminal, junk space where moss "paint" grows on its own as a hybrid form of guerrilla gardening. 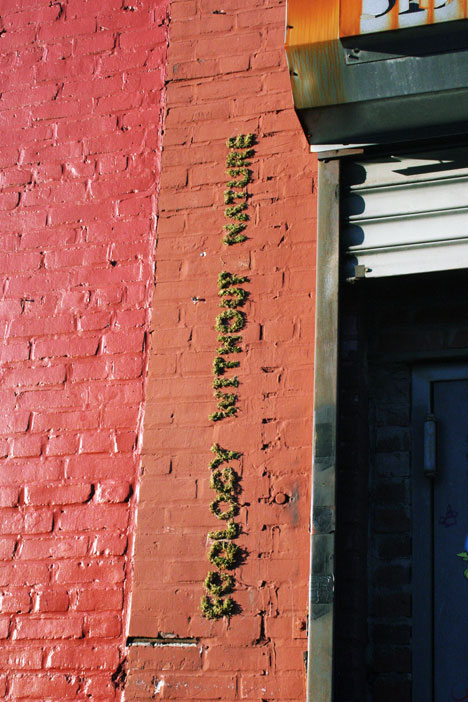 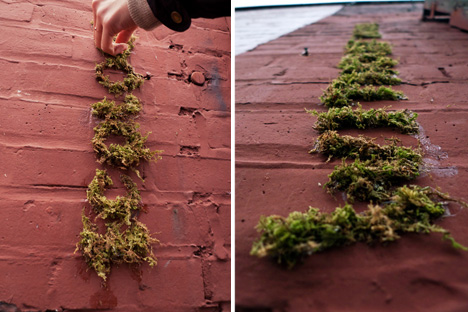 David Stolarsky's "SwimBrowser," for which he won the 2011 OpenNI Developers Challenge, was nothing short of brilliant. Although the GeorgiaTech Masters student (in Computer Science, of course) created the kinesthetic UI nearly a year ago, it was definitely one of the more impressive pieces on display:

Stolarsky also created a brand new work to show for the occasion (as did dozens of other art hackers, after the jump)... 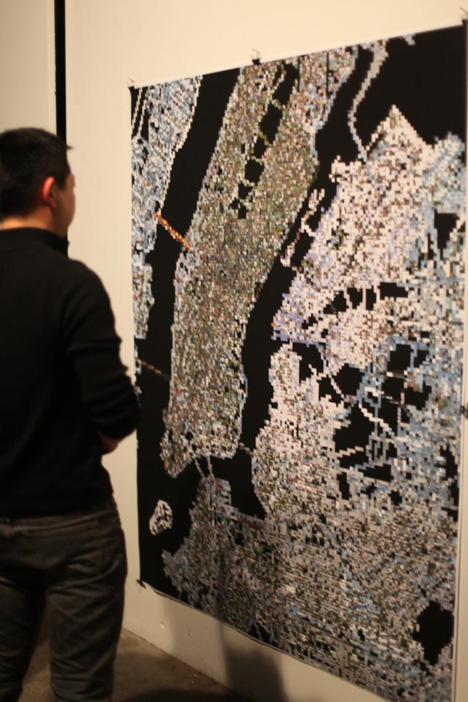 Stolarsky's "18,154 Consistent And Regular Views Of New York" is, as its title suggests, a photomosaic map of New York City, comprising as many "consistent and regular views" of our beloved Big Apple... courtesy of Google Streetview. The computer whiz figured out how to download 18,154 panoramas using the popular map site's API, collecting 1.5GB of image data in some 30 hours. To create the piece, Stolarsky "intentionally aimed the camera at about 45 degrees above the horizon so that Manhattan would be 'dark' (full of buildings) and e.g. Queens would be full of sky. It turns out Manhattan is especially green from this angle, which my New Yorker friend staunchly refutes."This work of course only scratches the surface of visualizing space in this way. Perhaps we'd like to see only windows, or only red things, or only the pavement. Or only faces. Google already finds all of the faces in their imagery, but of course they do that in order to blur the faces. Even better than picking any one angle to visualize, and here I am paraphrasing Jer Thorp, would be to make this visualization interactive and allow the world to find the good angles. 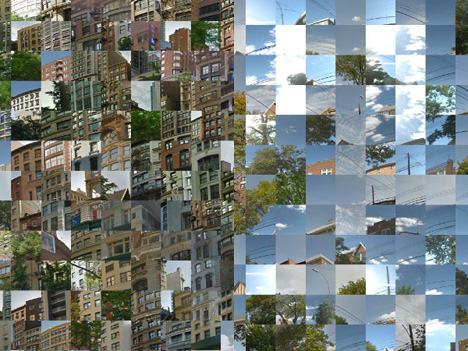 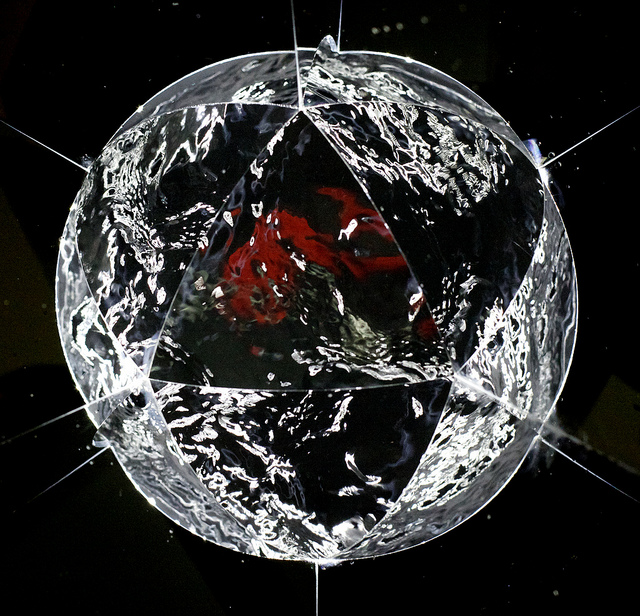 Toby Schachman's "Sphere of Water" was a seemingly simple concept that was beautifully executed: a kaleidoscopic view of bubbling water worked to mesmerizing effect. (The artist notes that he "[doesn't] consider the Art Hack Day version finished, but I do consider it above the critical threshold where the viewer sees it—on first impression—as the intended representation.") 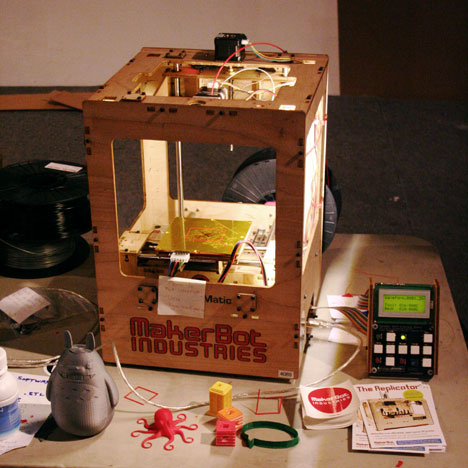 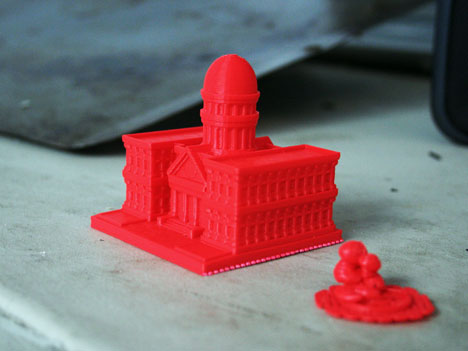 Meanwhile, a couple of MakerBots were on hand, cranking out 3D-printed tchotchkes to accompany several projects, including a capitol building for the Jell-O city and a 3D model of a Billy Joel tune ("Scenes from an Italian Restaurant," for those of you who can't tell from the extruded waveform). 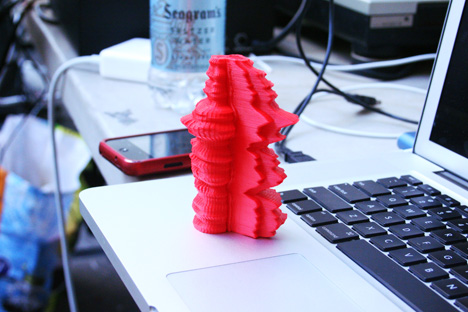 Gene Kogan, the artist behind the latter piece, was also among the programmers who saw fit to translate the newly-developed ScratchML into visual data. Kyle McDonald, Jamie Wilkinson and Quin Kennedy used an array of DJ hardware—from a pair of time-honored 1200s to a hacked Vestax mixer paired with an Arduino, as well as Serato and Traktor interfaces—to codify the raw output of a turntablist's performance, drawing an analogy to Graffiti markup language. 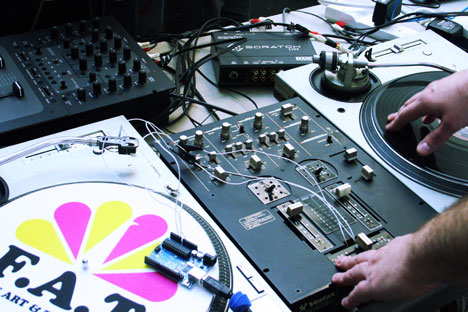 I was interested to learn that there exists a notation for writing turntable scores, though transcribing performances in real time is just one of the goals of the team behind SML: check out their website for updates and developer tools. 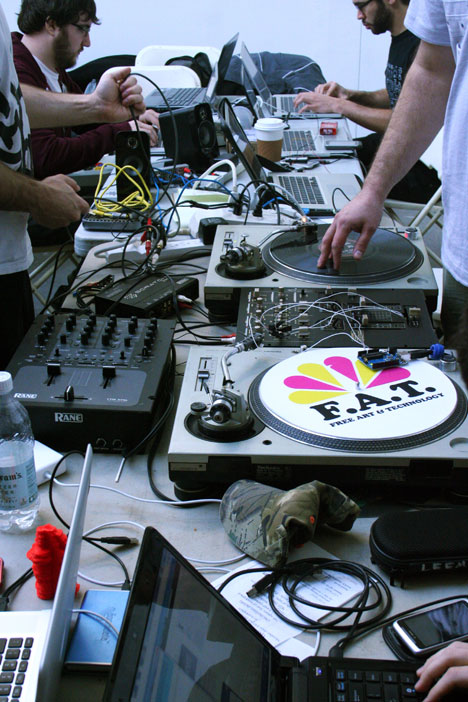 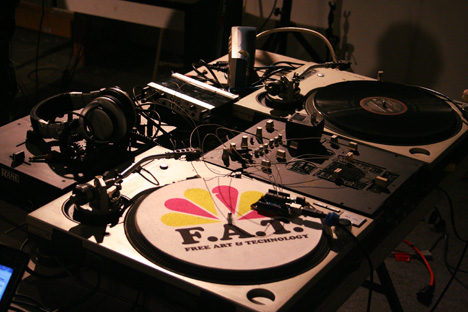 In addition to a handful of ScratchML-based visualizers (including one a Droid app), a team from Canvas came up with "Aliens That Look Like Skrillex," a video game based on a conspiracy theory that goes beyond its namesake producer: "Aliens are trying to communicate with us through dubstep, we interpret these actions as hostile and go on the offensive. Destroy the aliens." It's a classic side-scrolling space shooter in which a DJ controls the boss with turntables—via ScratchML—to engage a player in battle. (Hyperallergic has additional photos.) 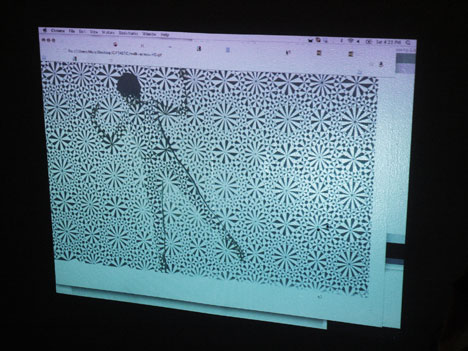 Other highlights included a "GIF photo booth," complete with moustache and spectacles props as well as trippy op-art backgrounds. Moreover, the video data was also projected onto a screen on 34th Street in real time, offering a glimpse of Brooklyn creative culture to Midtown Manhattan (see the results here).

Indeed, GIFs were as popular as ever at Art Hack Day: I'd seen bits and pieces of artist Casey Pugh's outstanding crowdsourced "Star Wars Uncut" (posted in full above) before, but he saw fit to chop it into even smaller bits and pieces for the event.

Breathalyzer met visualizer in "A Breath of Fresh Neon" by Avery Max, something like a grown-up carnival game: partygoers were invited to use their powers of inebriation to illuminate a string of neon lights. 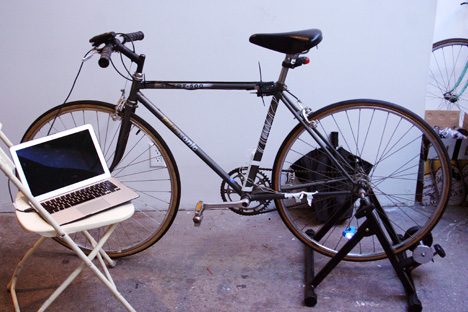 The "Bike-In Movie" was a fascinating concept: to simulate a bicycle-controlled projector, in which one can pedal faster (or slower) in order to speed up (or slow down) the movie. However, lacking a proper bicycle computer, designer Jonathan Dahan ended up rigging the wheel of a bicycle with a light and an Arduino to detect the speed, a hack that proved to be a bit too ad hoc when the light flew off the spokes. He noted that he could have achieved the same effect if he'd used a hub dynamo and a capacitor as a simple power meter.

Art Hack Day founders Olof Mathé, Andrey Zhukov and Conrad Whelan came up with "Skippable Rope," in which two 'rope-holders' emulate a jump rope by swinging their iPhones in sync (to generate an audio cue). A third person stands between them, jumping in time with the 'swoosh' sound, such that "if he or she doesn't do so, the rope hits that persons pants, plays that sound and goes silent."

The "Pizza Machine" was a fun exercise in virtual instant gratification, though it ultimately left me wanting more....

See all of the amazing projects on the Art Hack Day website... this is by no means a comprehensive overview of the projects that were developed over those two magical days at 319 Scholes... and head to their Facebook page to see photos from the grand finale!