A Hands on Education: The American College of Building Arts

How many times have you been all set to buy the latest Apple gadget only to be told by a friend to wait—an updated version is scheduled to come out soon and any day now the phone in your pocket will just be one generation closer to obsolescence, your top-of-the-line iPad sadly out of date? Maybe I'm just airing my personal grievances here, but for those reminiscing about a simpler time, there's an oasis of traditional, time-honored craftsmanship in a Charleston, SC jail built over two hundred years ago, back before Steve Jobs was even a glimmer in his great-great-great-great grandfather's eye.

It's The American College of Building Arts, the only school in the United States to combine a four-year liberal arts education with specialized training in pre-Industrial trades—and the only school to boast 100% job placement. Granted, the average class size is less than twenty, but I expect that to increase with the ever-growing resurgence of the hand-made. 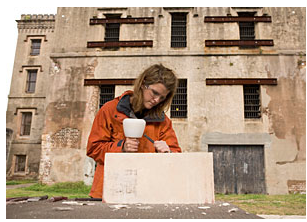 Students can major in Architectural Stone, Carpentry, Forged Architectural Ironwork, Plaster Working, Preservation Masonry or Timber Framing. They receive hands-on training within the school itself, which ACBA's president, General Colby M. Broadwater III (how's that for distinguished?) calls a "living laboratory." The campus was originally a jail built in 1802 with the help of Robert Mills, whom many consider the first all-American trained architect, and who later went on to design the Washington Monument. The building doesn't look like it's been updated in a while, but it acts as a canvas, providing students with an immediate source through which to practice what they learn—right on the classroom walls.

A Hands on Education: The American College of Building Arts