Accumulated Meaning: "Swept Away" at the Museum of Arts and Design

Yesterday saw the opening of Swept Away: Dust, Ashes and Dirt in Contemporary Art and Design, the Museum of Arts and Design's latest exhibition in their ongoing examination of materials and process. As its title suggests, all of the works are composed of materials that are overlooked or otherwise ignored, if not eliminated altogether—unsavory scourges of sanitation that accrue over time, infinitesimal residues man-made and otherwise—dirt, dust, soot, ash, smoke and sand. 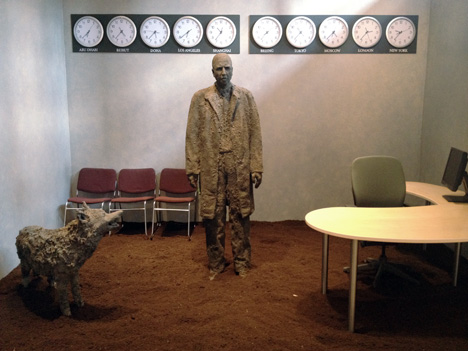 The smallest units of detritus have been gathered, organized and ultimately mastered in some two dozen artworks on display on the fifth floor of the museum. Chief Curator David McFadden noted that he'd initially expected to include works by a scant half dozen artists—sculptor James Croak and Zhang Huan, both of whom are in the show, came to mind—though the list eventually ballooned to 50 candidates, half of which are included in the exhibition. Indeed, the scope of the exhibition is more diverse than it is homogenous, featuring works in two dimensions and three, from representational (Vik Muniz) to abstract (Jim Denevan), with varying degrees of conceptual content behind the disparate approaches to visual execution. 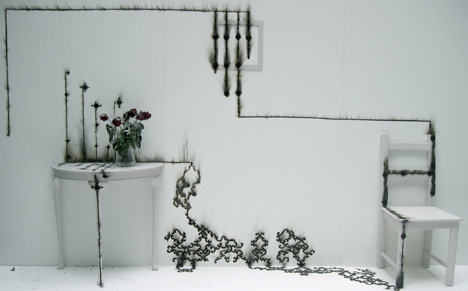 The ineluctable meaning of particulate matter—that from which we come and to which we will return, in so many words—was especially prominent in a few ephemeral works that are presented as photo or video documentation par excellence. Fuses burn with fearlessly self-destructive determination and tides rise with unsentimental predictability, leaving unmistakable scars (Glithero's Burn Burn Burn, above) or effacing the work entirely (Andy Goldsworthy's Bones/Sand/Ball/Tide, below) 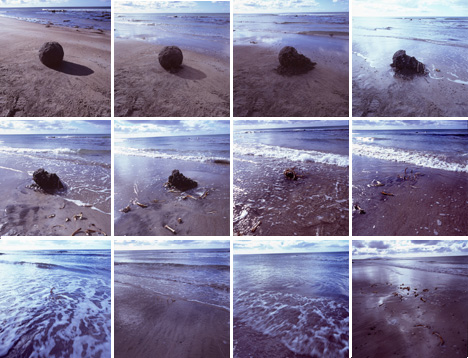 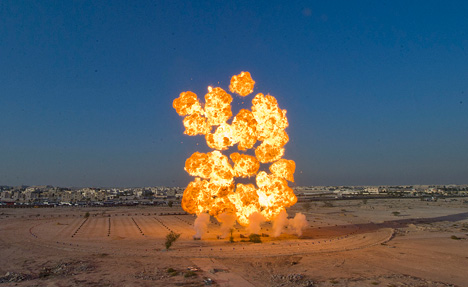 Nevertheless, the works in the exhibition are predominantly representational—even Cai Guo-Qiang's Black Ceremony culminates with (spoiler alert) a puff of rainbow—and, in a couple cases, the artist is literally using dirt (or dust, ash, etc.) as a medium, i.e. for drawing or sculpture.Which is not to say that any of the works is somehow less true to the theme; rather, the choice of material is simply another layer of meaning—finer, perhaps, than a coating of dust, yet essential to the content of each and every work. Zhang Huan's ash sculptures invariably take on a spiritual significance when one learns that the raw material comes from incense burned in Buddhist tribute; Julie Parker's patchwork quilt, on the other hand, is made of lint from her friends' dryers. 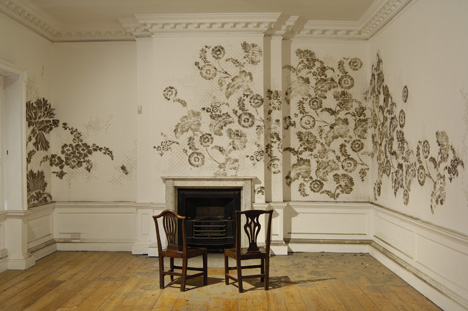 The captured-smog afterimages of Kim Abeles' table setting and Su Zhiguang's classically-inspired dirt painting serve as evidence of their place of creation (Los Angeles and Beijing, respectively), while Catherine Bertola's flocking is composed of dust gathered in the museum itself. Igor Eškinja, one of three artists who is set to execute a temporary piece during the exhibition, has a standing order for the very same, though further details about his piece remain under wraps until its premiere on February 27th. (Linda Florence and Elvira Wersche will also be 'live-installing' performance-oriented works in the second floor gallery.) 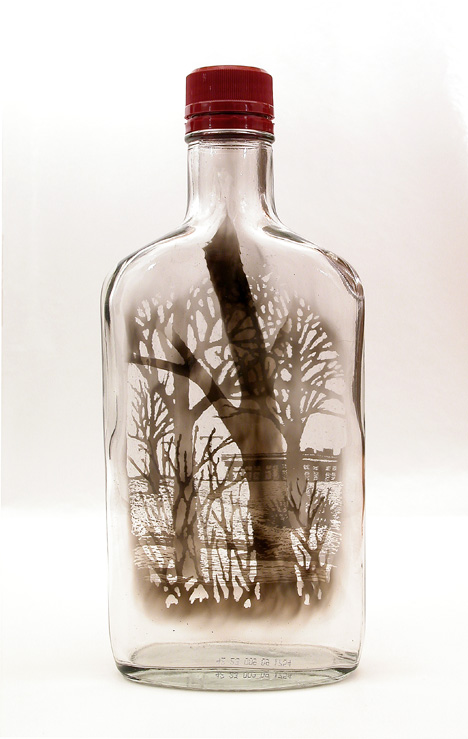 Jim Dingilian one-ups the ship-in-a-bottle with lithography-like soot 'drawings' inside of found liquor bottles (McFadden mentioned that the artist fills the bottles with smoke and uses needles to manipulate the soot-coated interior of the vessels). 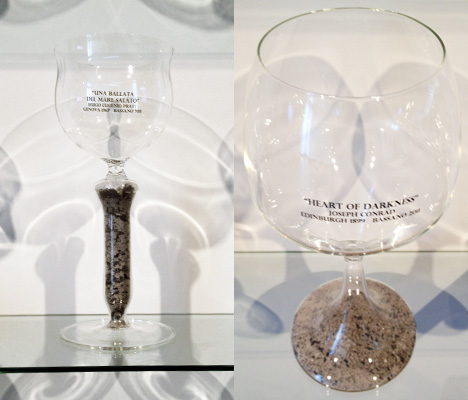 Meanwhile, Antonio Riello imbues a different his drinking vessels with both personal significance and the time-honored tradition of memento mori at the expense of that which he hopes to preserve. Each of his elaborate custom chalices in this ongoing series of work has a sealed compartment in the stem or foot, containing the ashes of a book that he has read (the title, author and his or her lifespan are embossed on the glass). 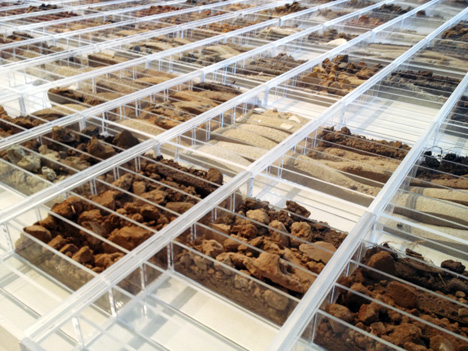 Margaret Boozer's loosely taxonomic Correlation Drawing / Drawing Correlations: A Five Borough Reconnaissance Soil Survey is equally conceptual, though its pseudo-scientific content is a veritable world away from Riello's thinning bookshelf. Soil samples from across New York City are presented in a square grid of lucite bins, arranged according to geographic location and upwards of eight geological strata.

Where Boozer's work contains only traces of human existence, Brazilian graffiti artist Alexandre Orion explores a different possibility of the urban underground. Ossário is an 'intervention' in one of São Paolo's road tunnels, which have become blackened with soot, in which the artist used a cloth to create 'reverse graffiti' by wiping away the grime to render a countless skulls in his signature style. McFadden related that the capital city's department of sanitation ultimately saw fit to clean those tunnel walls that Orion had 'defaced'—but no others. Ever the innovator, Orion then decided to extract the soot from the cloths he'd used and paint with the pigment. 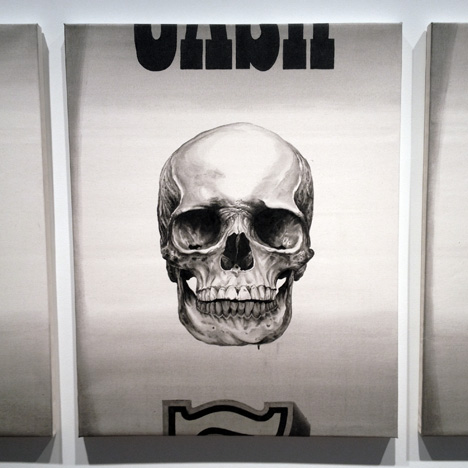 While this survey only touches on roughly half of the works on view, suffice it to say that all of them deserve more attention than we might provide in a preview: insofar as the otherwise insignificant raw material is the common theme of the works, each one invites firsthand examination.

Conversely, if the premise of the exhibition seems contrived—disposable, as it were—Swept Away is anything but: these works address a full spectrum of contemporary artistic endeavor. Contrary to the nihilistic symbolism of detritus, these artworks collectively illustrate a uniquely humanistic proposition: to make sense of the world around us by manipulating the smallest units of physical experience. The fact that these building blocks lie on the threshold of perception—an easy metaphor for the atoms and particles that constitute matter on a microscopic level—is precisely their appeal for artist and audience alike, as well as the very essence of their nigh-limitless potential for permutation.

Perhaps the most remarkable thing about the show is its sheer accessibility. The work is conceptually compelling yet refreshingly free of conceit across the board: the general public need not 'get' Croak's Dalí reference or realize that Phoebe Cummings' vase was inspired by 18th-Century still lifes. Short of any sweeping statements about the exhibition, we'd say it's well worth a visit if you're in New York City this spring or summer.

Accumulated Meaning: "Swept Away" at the Museum of Arts and Design