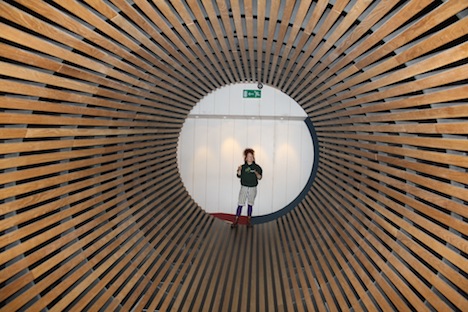 Tour Guide at the Leprechaun Museum

Storytelling is a concept that we are all familiar with, regardless of our background. As designers, it is often utilized as a tool during the design process. In Ireland it has been part of their culture for centuries. During Interaction12, IxDA organizers did a great job of incorporating Irish culture into the conference through different activities and performances at the venue. In between talks, I found myself attending an interactive storytelling experience called "Storytelling a la carte" with professional bard Coilín "The" Oh-Aissiex and Claire "Ambiencellist" Fitch. The audience was able to choose from a menu of stories, which consisted of options such as Ancient Irish Tales, Contemporary Irish Tales, and International Folktales. Each category had descriptions as if the audience was ordering off a menu at a restaurant. For example, under the category Ancient Irish Tales, one of the "Flavour" descriptions consisted of pity and magic, while another consisted of outrage and triumph. Audience members were asked to choose a category and a corresponding flavour of their choice from the menu for a unique tale accompanied by improvisational music. 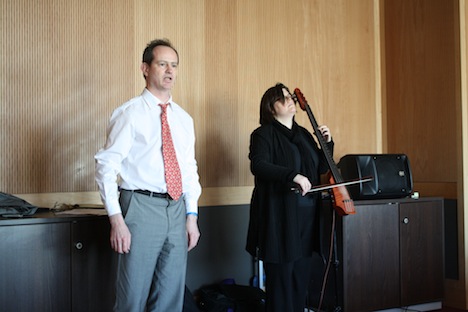 I had the opportunity to experience two stories before moving onto the next 45-minute block of talks. The Storytelling a la carte experience was a perfect segue into Tom O'Rahilly's talk titled "Identity and Imagination."

Tom O'Rahilly gave our readership some insight on storytelling from both a cultural and design perspective in our Interaction12 preview. O'Rahilly, Director of the Leprechaun Museum in Dublin, began his talk by sharing his experience as a product designer, realizing that people primarily wanted to experience their products. He then moved into a discussion on identity. People often think of identity as items that identify us in daily life, such as a social security card or driver's license. However, O'Rahilly addressed cultural identity. According to O'Rahilly, components of identity include location, perspective, play and people. In storytelling, key components are making sense of the unknown, engagement and experience. These components were taken into consideration during the design of the Leprechaun Museum.O'Rahilly wanted to create an interactive experience for the museum visitors, which would include storytelling as well as an environment which would allow for unique experiences for storytelling. He chose to use the Leprechaun as the focal point for the storytelling experience. The Leprechaun is an iconic figure in Ireland, although not a popular one. O'Rahilly shared a quote from John A. Costello, which highlights his negative feelings about leprechauns: "For many years, we were afflicted with the miserable trivialities of our tourist advertising. Sometimes it descended to the lowest depths, to the caubeen and the shillelagh, not to speak of the leprechaun." During his talk, O'Rahilly shared the story of Tom Fitzpatrick and the Leprechaun, which is one of the stories that visitors of the museum experience. After hearing the story, I was intrigued and felt that I could best relate by visiting the museum. 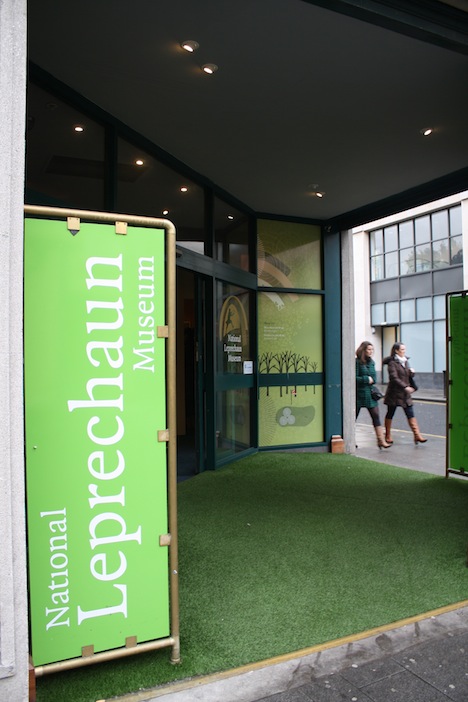 Apparently I wasn't the only one that felt this way since half the group at the museum that morning was from Interaction12. Before entering the museum, we waited in a room full of leprechaun paraphernalia. It was a great opportunity for us to begin the experience by speculating what we might encounter as well as discuss the objects that were on display. After ten minutes or so, our tour guide came into the room and confirmed some of our speculations. She went around the room and educated us on leprechauns. She also told us that we would be able to experience what it felt like to become a leprechaun as well as a giant; two characters we would hear about during the storytelling interactions in the museum.

After the introduction to our experience, we walked through a hallway that was designed to make us feel larger. As we walked through the hall, away from our tour guide, she started to get smaller the further away we walked. There were several hallways in the museum designed specifically to create different environments, which would prepare the visitors for upcoming storytelling interactions. One of the rooms we walked into, probably one of the most popular for photographs, was a room full of giant furniture. This was the room where everyone experienced scale as a leprechaun. People were running from object to object taking pictures and embracing the experience. Other rooms were specifically designed as ideal storytelling environments. In one room we sat in a circle around a pot of gold and in another room we sat in a dark forest-like environment to listen to stories. Each room created a different interaction and complimented the stories that we were told. 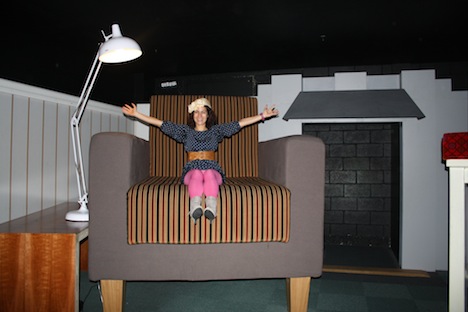 Having the opportunity to visit the museum and attend the talk was a great experience and a memorable moment of Interaction12. Tom O'Rahilly did a wonderful job capturing the concept of storytelling through creative environments and interactions. I look forward to hearing more about how the museum evolves in the future.