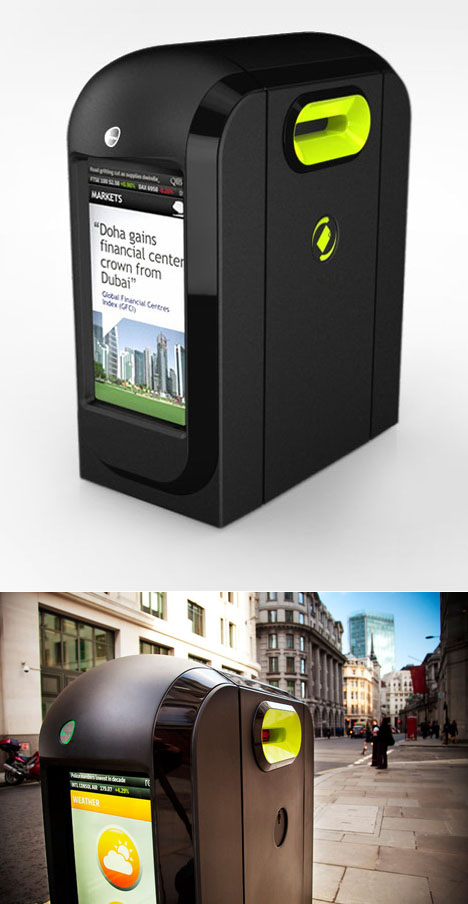 The nice thing about design school projects is that most are meant to be conceived of and completed within the same semester. In the absence of manufacturing problems and political issues, you're presented with a problem and expected to solve it with design in a matter of months.

In the real world, of course, the process of going from problem presentation to design solution can seem interminably long. After the terrorist attacks of September 11th, 2001, cities like New York and London began removing trash cans from certain public spaces. In 2005 London suffered their own terrorist attack on July 7th. By 2007 two entrepreneurs named Kaveh Memari and Brian James designed and began testing a bombproof trash can; we first wrote it up in 2008, and it was scheduled to land on London streets, featuring internet-connected LCD screens that could warn Londoners of local emergencies, in 2009. That release date was then pushed back to 2010, with a target of 100 cans on London streets, but the release date came and went.Now it's 2012—just over 10 years since the first rash of attacks and at least five years since the bombproof cans were first conceived of—and the British press is at last reporting progress. Memari and James' Renew Solution has reportedly delivered and installed 25 of their devices, now called "communication pods which double as convenient recycling points," around the City of London as of late January. The spiffy boxes are equipped with screens on either side that broadcast everything from news to mass transit updates to stock prices.

Renew Solutions' target is to have another 75 units installed before the Olympics, and talks are now underway for a test unit outside of New York's Stock Exchange, with further expansion planned for Tokyo and Singapore. 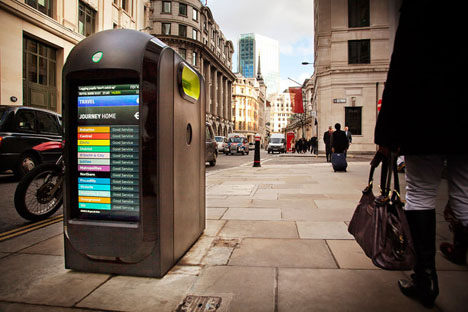 The functionality of the actual bins themselves is also evolving. They currently receive signals containing the information they need to display on their screens; the company has now proposed the idea of using the already-Wi-Fi-enabled cans to begin acting as wireless hotspots.

It's been a long road for this project, and it's nice to see it coming to fruition. As Robin Hepburn, from financial communications company Waughton (a Renew Solution partner) told The Daily Mail, "It's taken at least five years to get to this point and we're delighted to finally get them out on the streets."

A video (unembeddable, unfortunately) showing the device in action is at the bottom of this link.