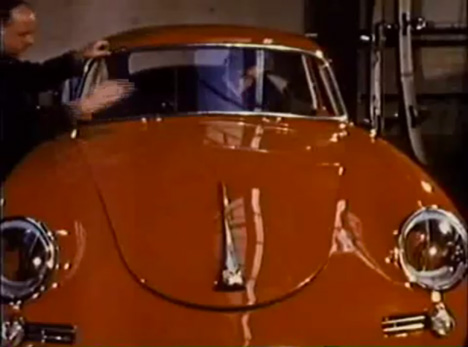 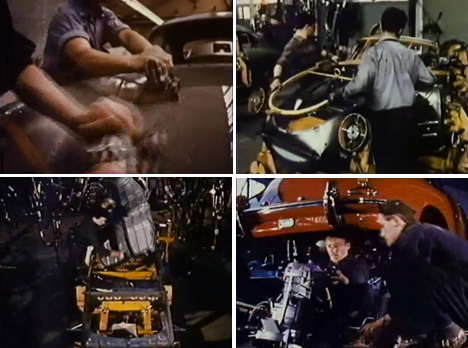 This has been online for a while now, but we recently came across this remarkably detailed and well-produced—for the early 60's, when it was made—documentary on how the iconic Porsche 356 is manufactured. It's not clear as to what year it's from, though we've deduced that the factory produced roughly 7,500 356s during that era, or about 30 per day. 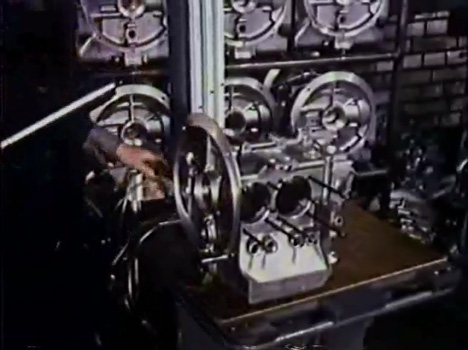 We've pointed out just a few highlights, but frankly it's worth watching nearly every second of the videos—a feat considering that the doc, broken into five parts, clocks in at nearly 45 minutes. The first four parts, which come in at around ten minutes each, focus on specific parts of the manufacturing process, roughly from the outside in (as per the assembly sequence).

Part 1 focuses on the fabrication of the "famous unitized Porsche car body"; the car "assumes an identity" at 6:48.One of the highlights of Part 2—the finishing of the shell, from paint to doors, bumpers to glass—is the windshield installation specialist (6:10), who "knows exactly how hard to hit the glass without breaking it."

Part 3 shifts to Porsche Plant No. 2, the machine shop, which is home to gems such as the three-way drill (0:40). The viewer is invited to follow along very thorough inspection of the engine block and half a dozen other components.

The footnote about the apprentices (5:53), a hallmark of the "German tradition of craftsmanship," is also noteworthy.

Part 4 starts with the engine assembly line, moving on to the transmission and eventually the installation of these parts within the body.

If the safety gear (or lack thereof) throughout the videos seem rather inadequate by today's standards, it's certainly amazing—refreshing, even—to see so many (ungloved) hands handling the machinery and parts.

The final part is half as long as any of the others, illustrating the road testing, water testing and transportation, with a pleasantly anthropomorphic conclusion: "The cars seem to be sleeping peacefully, awaiting the touch of the workers' hands to bring them back to the life given them by Professor Ferdinand Porsche."

Again, the narration is absolutely chock full of amazing facts, but—my one complaint—the muzak gets a little bit cartoonish at times, especially in a 40+ minute block (Let's just say it's a very different experience on mute, with Kraftwerk or Underworld as an alternate soundtrack.)

In a somewhat related note, Porsche is rumored to be reviving the 356 in 2013, though it's safe to say that the manufacturing process will involve fewer humans and more robots. Porsche's marketing team would do well to produce a shot-by-shot restaging of the original video... and perhaps provide me with a 356 to call my own for coming up with the idea.