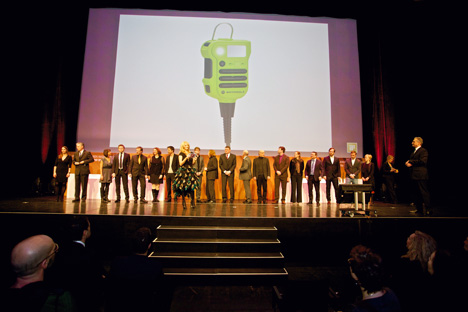 We intentionally omitted one of our favorite iF Product Design Gold Award-Winners from Tuesday's roundup of a half-dozen notables because we had the opportunity to talk to two members of Motorola Solutions' design team. Scott Richards, a Senior Industrial Designer, and Mariah Levitt, a Human Factors Engineer for Motorola Solutions, made the trek from mild Florida to frigid Munich to accept the award on behalf of the telecommunications innovators last weekend. The two shared several insights into the premise and process of the APX™ XE Remote Speaker Microphone. 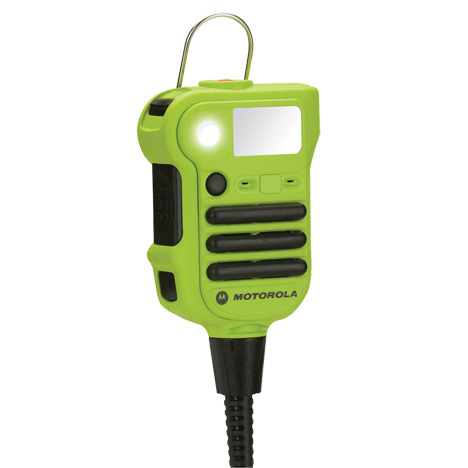 Core77: Let's start with a little bit of background about the device.

Scott Richards: It's a fire-specific microphone: it's called the XE RSM. "RSM" stands for "remote speaker microphone," which is a common phrase in the industry.

About four or five years ago, Motorola Solutions made a conscious decision to really invest in what is it that firefighters need that's unique from other public safety personnel. In a lot of research, a lot of times over the years, we had heard from firefighters, "The products that you're showing us and testing with us, really just seem to be adapted police devices. And we feel like we need products that are more specific for our needs.

In fact, that's really Mariah's specialty as a researcher... [her role is to] speak with literally hundreds of end users that are firefighters, and identify their needs when it comes to communications.

Mariah Levitt: [For our] research, we've done real fire training—gone in and understood what they deal with—and you come out and you have that emotional element of what you can and can't you do in that environment with current devices. You really realize what we need to work on, and [we've addressed] a number of those things in this device.

Some other things we did are in-person interviews and ride-alongs with firefighters. And we also used a lot of cognitive psychology techniques—predictive exercises and things like that—trying to get firefighters themselves to think about what would they ideally want.

All that stuff went into something like this, this speaker mic.

SR: Firefighters are all about wet, dirty... hot, and cold environments. And there's a condition that they have called situational disability, which simply means every user is disabled at one point or another, because of the protective clothing they're wearing, the noise in their environment, etc.

For example, when it comes to noise, this device is designed with an exclusive noise-cancelling system so that when the user is speaking into it, he's heard much more clearly on the other end. The team leader at the truck, or the dispatcher, is able to understand what they're saying, even with whirring fans and motors in the background, roaring fires and everything.

ML: And fire alarms in the building... It's 50% louder than our previous product.

This is the first microphone that has that. Before that, we had the radios that could [had noise-cancelling]... but as soon as you attach a speaker mic to it, [the signal is] only as good as what comes out of that speaker. So this is the first opportunity for us to actually make sure that the whole system has dual noise-cancelling.SR: And then other features: to deal with "gloveability," as we call it—[firefighters] are wearing big, heavy, oven-mitt like gloves—we've increased the size and tactility of the controls... and we've tried to place controls on different planes, so that they're easily identifiable without looking at the device.

Then we've learned along the way about an aesthetic that firefighters appreciate. And we feel that that's an important part of this too: it needs to look like it's a rescue/safety device.

In this case, we've given it a high-visibility color—this impact green color—which has resonated very well with our end users. We tested the color. Because we really didn't know, in the first place, whether that would fly or not; over the years, the folklore has always been, "well, we want it black, because our job is dirty and black hides dirt." But as soon as we began to test this color, it resonated with end users and with purchase decision-makers and so it's been very popular.

ML: The interesting thing is, red is generally [considered to be] a 'firefighter' color, but it does nothing for them, in their environment; it's the hardest color to see in the dark. They drop and lose their gear all of the time and it's very expensive, so being able to find it, and find each other, just because of that—this paint right here is reflective—so that it can help find them, or find the device.

Other safety features on here: this is a strobe light that, when you push the emergency button, that will light up... prior, if they fell somewhere, the only lights generally on the person, they're on their back—they have the airtanks. And those are the things that show, but they have nothing on the front, so the problem was if you fell on your back and you're trapped, there's no beacon to find you. So something as simple as a strobe light really helps. 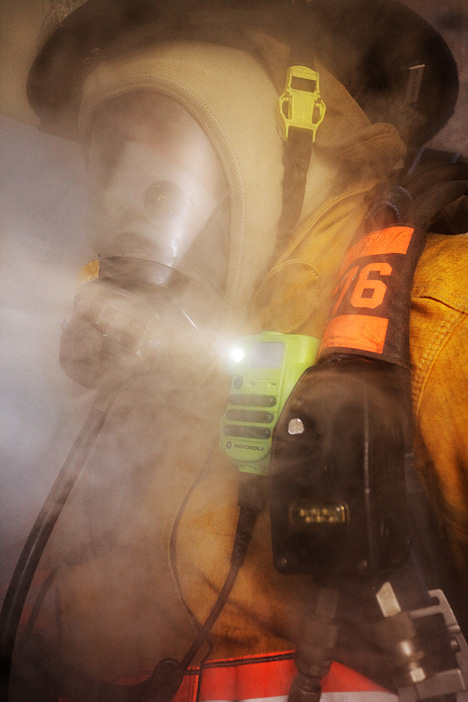 Core77: So as far as the materials go, I'm sure it's water-resistant, heat-resistant...

SR:Yeah it's waterproof, it's submersible... It's a very specific engineering polycarbonate used for this device. And again the color, it seems trivial, but it took quite a while, quite a lot of people, to formulate the color to still be able to meet the performance specs that are needed in the environment.

A couple of other features: wearability, carryability is important. They are carrying 50 to 60 pounds of equipment at any given time. So this has a clip that is pretty much traditional on every remote speaker microphone, but we've beefed it up, we've made it so you can you can pivot it... and it has a somewhat longer throat so it can fit on the larger straps more securely.

And then in addition to that, we've added this D-ring feature; a lot of custom fire apparel now—actually all fire apparel is custom—they're building clips, snaphooks, right into the coats. So this simple D-ring, it can either be out of the way, or flip it up and you can just hook this with a very secure built-in snap.

So little things like that are what we found through contextual research with end users. It's something that, when you're sitting back in a nice studio, trying to think of a neat design, it doesn't really come to you, so you have to go and actually experience a day in the life of these end users. 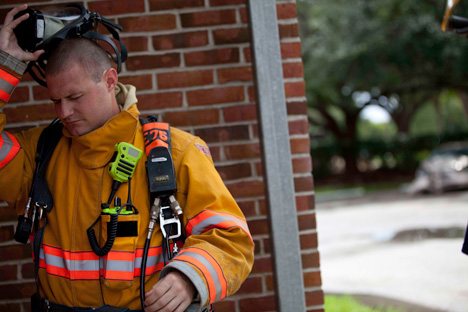 Core77: So you've been testing it throughout the process... has the XE RSM been field-tested at all?

SR: Yeah, it's still new... it is in the late phases of testing right now, and it has been shipped to some early customers.

So that's why this is such a big deal, and in many ways, the fact that this is new and pairs with a different radio... it's helping to actually sell the main radio, what we consider the main radio to be, just because they want this device.

Core77: So the [jack] isn't a universal standard, that connection...

ML: No, that goes with a new product that we came out with. So...

ML: Right. Well, it doesn't work with the [older] XTS series [but it pairs with] the APX series, which is the new line that started in 2008...

SR: Yes. Also an iF winner. 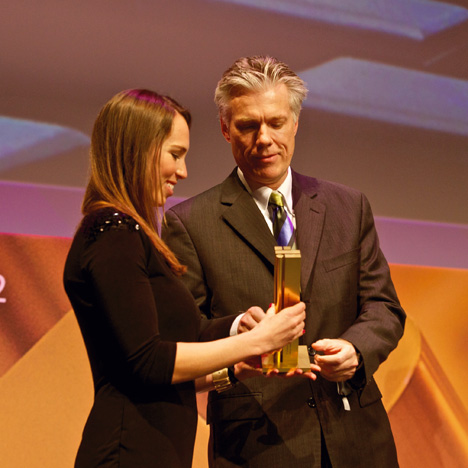 Core77: And you said this is the first microphone specifically developed for firefighters?

Core77: Do you see other applications for this device—maybe military, or disaster relief settings?

SR: You know, that's a good question; as we study environments, there are a lot of similarities... Working in a mine might be very similar to working [in] a fire when it comes to the equipment and the things that are worn... So we see definite applications in, like I said, boots-and-gloves environments. 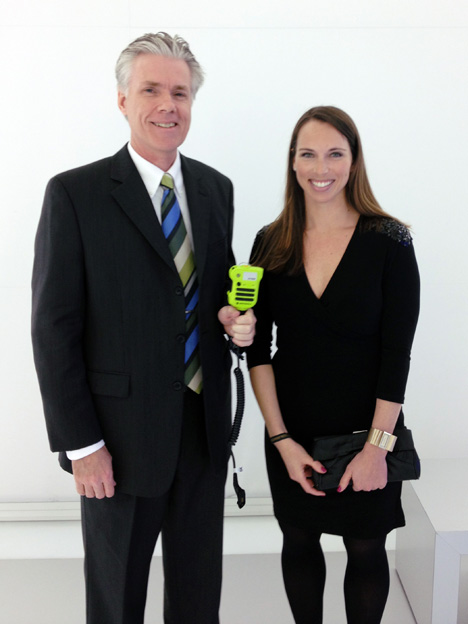 Core77: And when is it set to launch? Do you have a date set for wide release?

SR: Yeah, it has been announced. It's available for order now.

And this is an interesting industry; it hinges on municipal agencies and their purchasing processes—It's not like the way you go buy a consumer product.

But it is interesting because we've spoken to police and firefighters: there is a desire by end users, many times, to get the latest mic, or the latest radio... so there's always a buzz about those kinds of things in these kinds of businesses.

ML: In the past, they've bought their own microphones, if they didn't like the ones that were bought for them. So I'm not sure if that's going to be available yet for them, but that would be interesting to track.

SR: One of the Motorola taglines, this year, is "Products that are designed for moments that matter," and that's all about this idea of 'mission-critical' design, where products need to be ready at a moment's notice. They need to be transparent to the user, they need to enable the user to do their job, to save lives, to protect property, without even thinking about the device.

That's really what we're all about in our design.

ML: The greatest part is, when we have gone and shown the final product to some of the people before, who we talked to before, in the testing phases, they said, "You finally listened to us. This is exactly what we're talking about. This is not a hand-me-down. This is something that is firefighter-specific. And we want it."

Core77: Thanks for your time and congratulations again on the win. 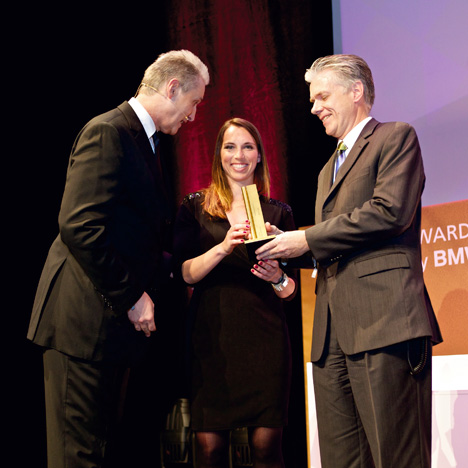